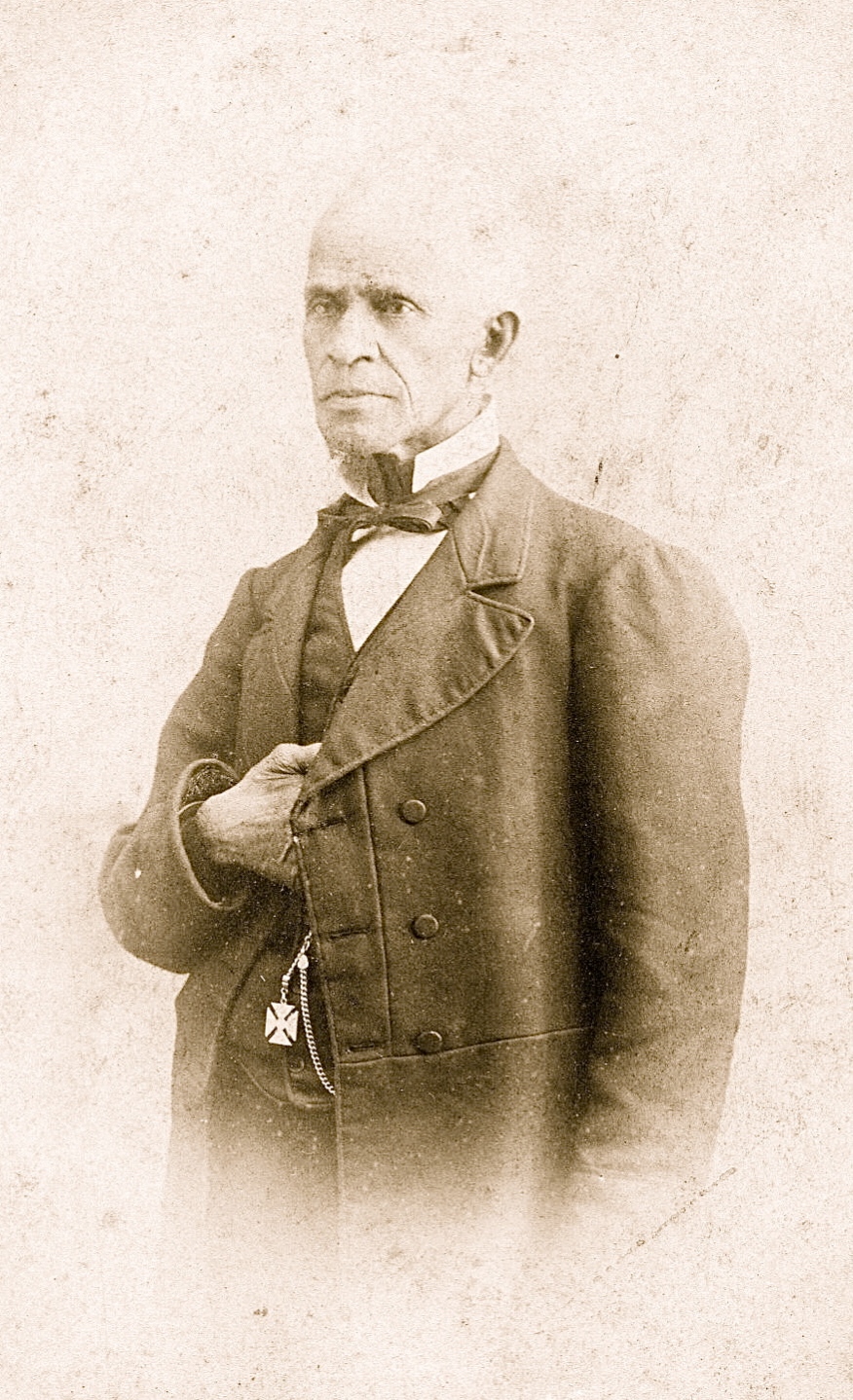 “Here, thank God, I am in an open field, in pursuit of life, liberty and happiness, and where I intend to spend the remainder of my days…”

— Robert Jonathan Robinson, in History of Lorain County Ohio, with Illustrations and Biographical Sketches of Some of Its Prominent Men and Pioneers (Philadelphia: Williams Brothers, 1879), 366.

He explained in the late 1870s that he was born in Winchester, Virginia, on March 18, 1818, and had prominent white ancestors on both his mother’s and father’s sides. His father was the grandson of Lord Fairfax, a British peer who owned vast tracts of land and enslaved hundreds of people in seventeenth-century Virginia. His Pennsylvania-born mother was the daughter of Colonel John Neville, a key military figure in the American Revolution.1

Although children of color were generally barred from common schools in Virginia, Robinson reported that he was able to attend school because of his free status and elite parentage.2

Robinson’s father died in 1836, when Robinson was just seventeen. At that point, he moved with his mother and his six siblings to Springfield, Illinois, where he opened a barber shop. Robinson recalled having given shaves and haircuts to well-known customers including Illinois politicians Stephen A. Douglas and Abraham Lincoln. In November 1837, Robinson married Sarah Ann Wiggins. He later recounted that in 1840 he tried to move to St. Louis, Missouri, but was arrested for entering the state without a license. After that, the family settled in Upper Alton, Illinois.3

Robinson became a leading Black activist from southwestern Illinois. A Baptist minister, he was associated with Union Church and took up leadership roles in the area’s Wood River Colored Baptist Association. He worked as a grocer, and the 1850 U.S. Census recorded that he owned $2,000 in real estate.4

Robinson was an important figure in both the 1853 and 1856 Illinois conventions. In 1853 he served as the president pro tem and was a member of the committee on education. Three years later, in Alton, he objected to militant language proposed for the convention’s address to the people of Illinois. According to the minutes, “He thought we should be mere [sic] mild in our language when asking for our rights, as we were not yet in a condition to demand them.” At the end of that convention, Robinson was appointed to the State Central Committee, whose primary purpose was to plan future conventions and maintain the statewide movement.5

Robinson may have been demoralized by prospects for justice in the conservative state of Illinois, however, because in 1860 his family left Alton for Wellington, Ohio. In 1849, Ohio had repealed most of its repressive anti-Black laws, and in many places men of color were even permitted to vote.6 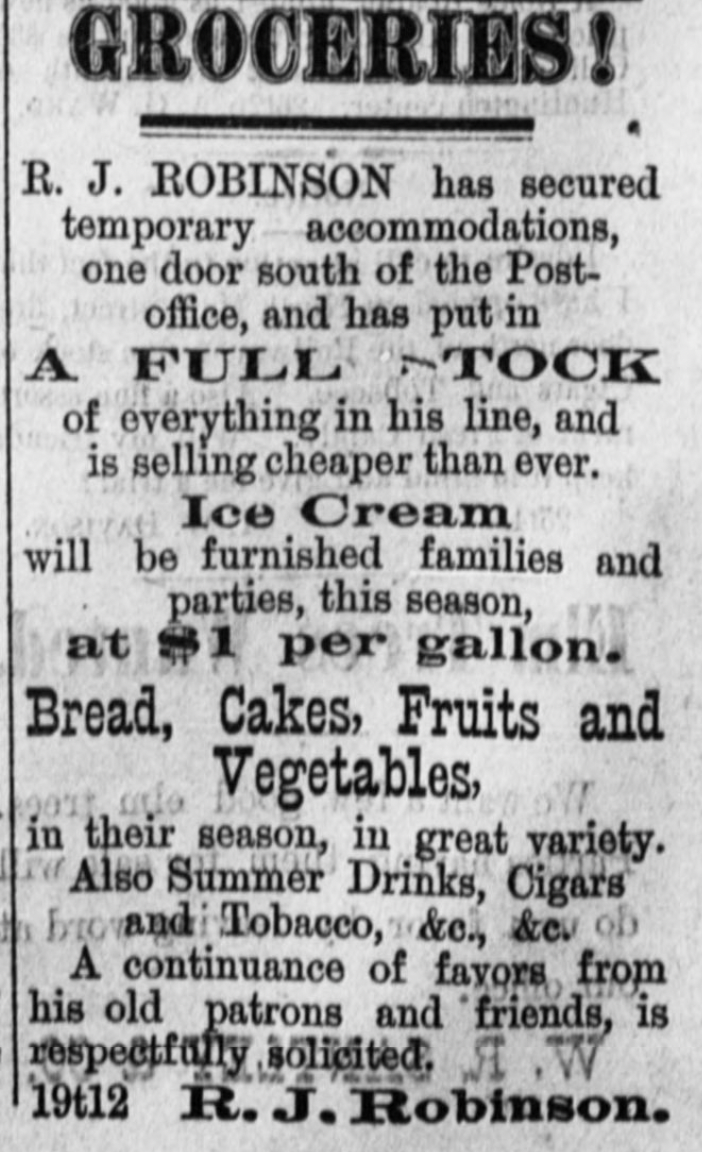 Robinson cast his first vote while living in Wellington, and that vote was for Abraham Lincoln, likely in the 1860 presidential election. In the late 1870s Robinson stated, “I can say that I have only been free since I came to this place. Here, thank God, I am in an open field, in pursuit of life, liberty and happiness, and where I intend to spend the remainder of my days.”7

In Wellington, Robinson returned to his previous vocation as a grocer, opening a store next to the Post Office in 1884. Advertisements proclaimed that he sold ice cream “cheaper than ever.” Later ads indicated that the business had grown to include an outdoor stand. In July of 1890, Robinson sold the business to his son, Ed Robinson.8

But R. J. Robinson had not retired from public life. In the spring and summer of 1890 he returned to Illinois. On arriving in Alton he delivered a lecture in an A.M.E. Church entitled “The Race Problem.” A local newspaper noted that he had left the city in 1860 but was “still remembered by some of our older citizens, as an intelligent and good citizen.”9

Robinson evidently traveled Illinois, giving his lecture on “The Race Problem” and raising money for the construction of an Emancipation Memorial in the state capital of Springfield. In Alton he also participated in fundraising for a monument remembering the white abolitionist Elijah Lovejoy, who was murdered by a mob in 1837.10

Despite efforts by Robinson and Black residents of Springfield, the emancipation monument was never built. A monument to Lovejoy, however, was dedicated in Alton in 1897.11

Robinson’s efforts to memorialize the Black freedom struggle reflected his lifelong pursuit of justice and community. He died in Wellington on December 23, 1890. He was seventy-three years old.12 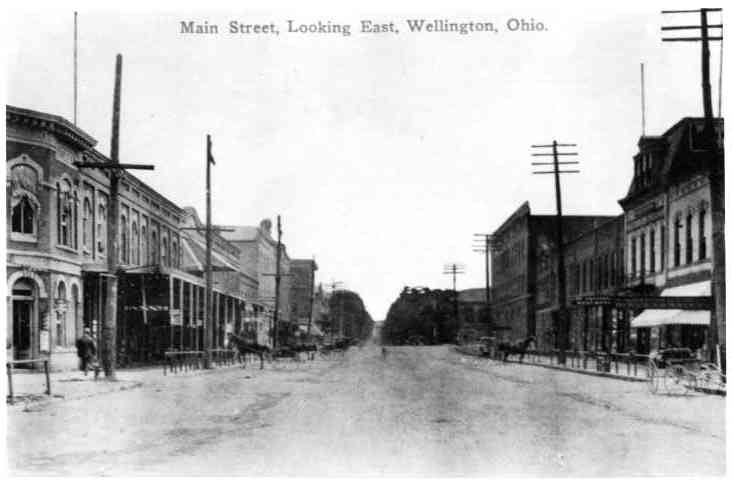 Main Street, Looking East, Wellington, Ohio
The buildings on either side of West Herrick Avenue looking east from Depot Street in downtown Wellington, Ohio, in the early twentieth century. The barber pole of the Robinson barber shop (which R. J. sold to his son at the end of the nineteenth century) is just visible about half way down on the right side of the street. (Email with Janet Hollingsworth, Nov. 16, 2021. Image source: Wellington family album: Photo 970706, Herrick Memorial Library. Courtesy of Herrick Memorial Library.)