The Colored Conventions movement brought together Black men and women from across the United States and Canada from 1830 through the 1890s. Together, participants mobilized and organized over the course of seven decades that included devastating anti-Black race riots, the growing popularity of the American Colonization Society, the enactment of the Fugitive Slave Law, the proliferation of derogatory representations of Black people, the Civil War and Reconstruction, and the return of Black disenfranchisement and legalized discrimination in the late nineteenth century.

The exhibits of the Colored Conventions Project deepen and expand our understanding of these processes and events. Created in partnership with national and local teaching partners and student contributors, these curated exhibits draw from our collections to present cultural artifacts and materials related to Black organizing in the nineteenth century. They transform how we teach and learn about this dynamic period, bringing the buried history of collective Black organizing to digital life for a new generation of students, scholars, and community researchers. 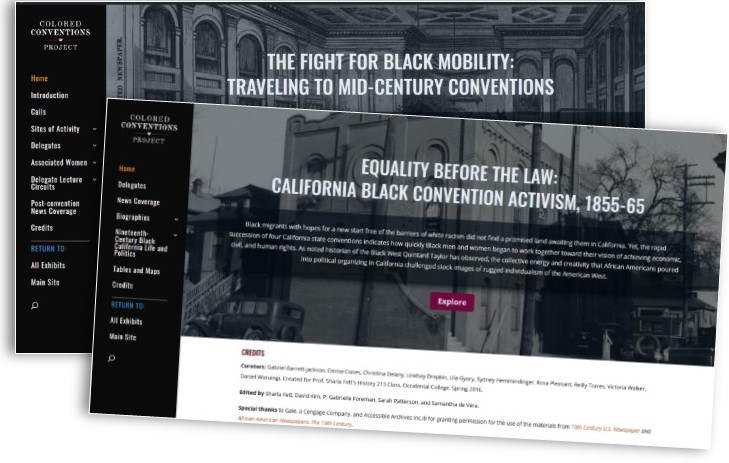 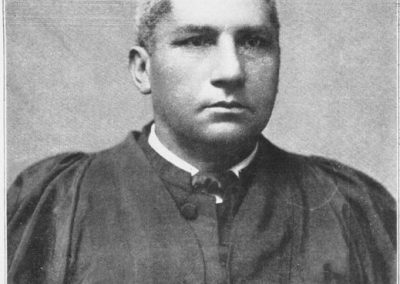 Before Garvey! Henry McNeal Turner and the Fight for Reparations, Emigration and Black Rights 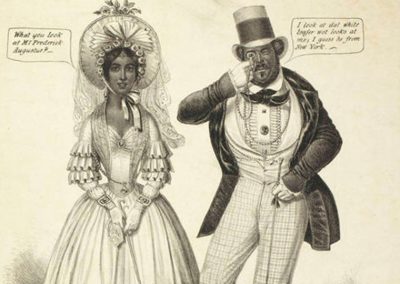 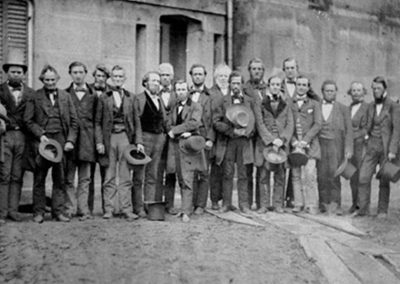 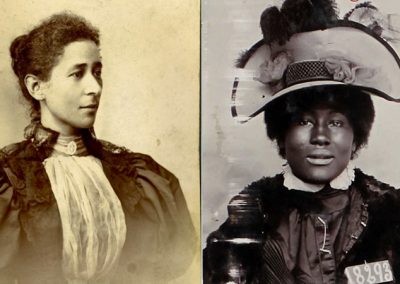 Colored Conventions and the Carceral States 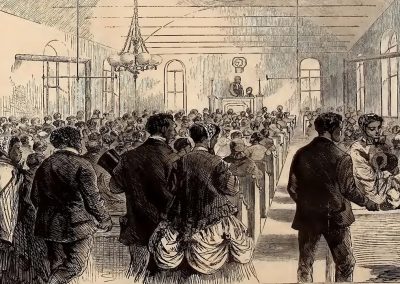 The “Conventions” of the Conventions: The Practices of Black Political Citizenship 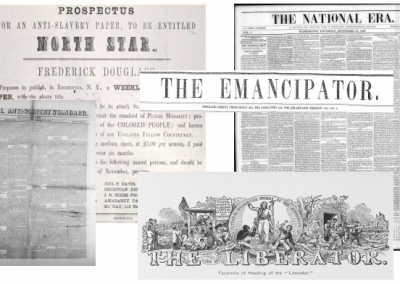 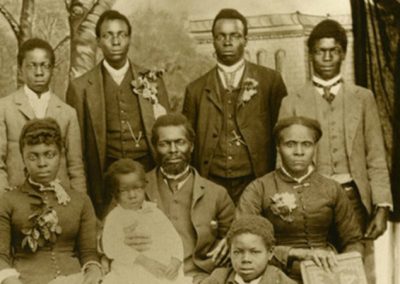 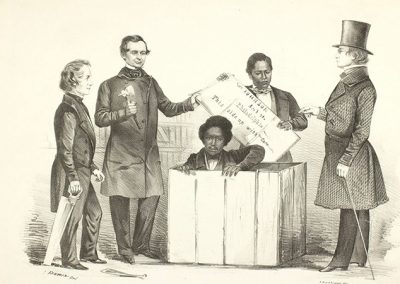 The Fight for Black Mobility: Traveling to Mid-Century Conventions 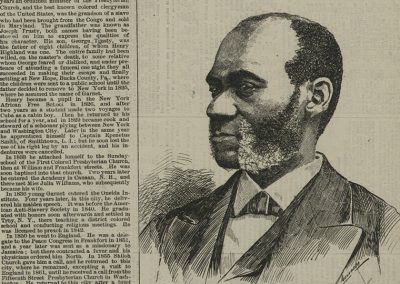 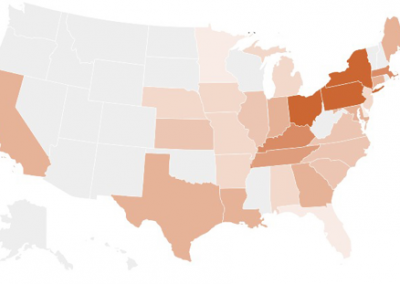 An Introduction to the Colored Conventions Movement 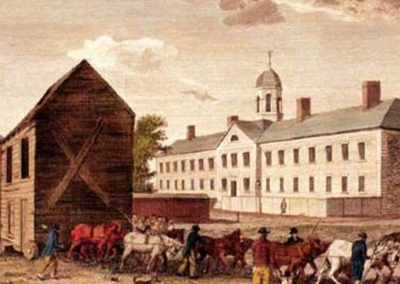 The Meeting that Launched a Movement: The First National Convention 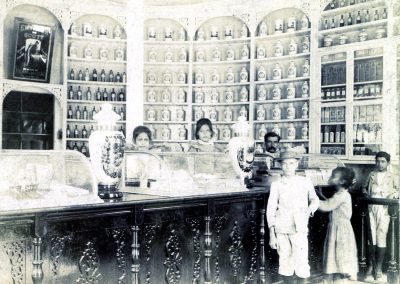 Prosperity and Politics: Taking Stock of Black Wealth and the 1843 National Colored Convention 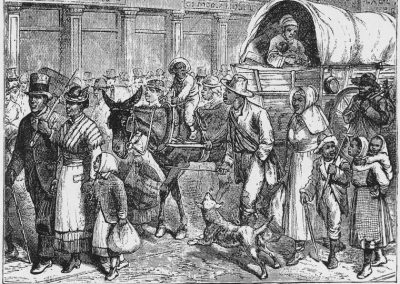 Stake Claim or Take Flight: The Birth of Southern Conventions after the Civil War 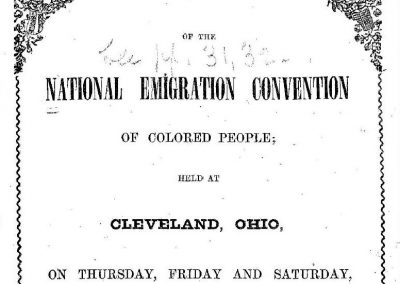 To Stay or To Go?: The 1854 National Emigration Convention 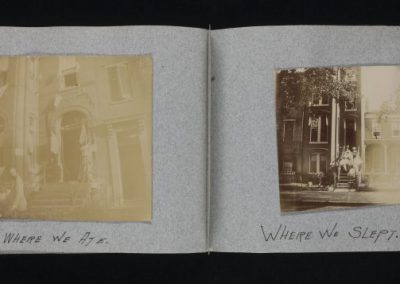 What Did They Eat? Where Did They Stay?: Black Boardinghouses and the Colored Conventions Movement 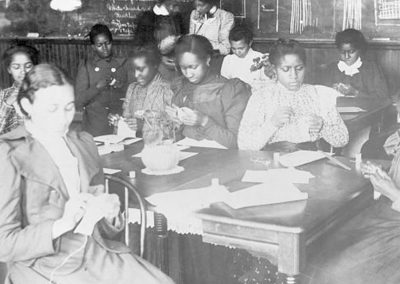 Before Garvey! Henry McNeal Turner and the Fight for Reparations, Emmigration and Black Rights

By the time he organized a national Colored Convention in 1893, Henry McNeal Turner was a highly respected leader in the African American community, having proven himself as an orator, preacher, writer, activist, and consummate professional. Still, secular histories continue to neglect his intellectual impact on key emigration and reparation debates among Black leaders at the end of the century. Turner’s commitment to the work and value of Black-led activism manifested in a variety of venues that include political conventions and the Black press. Building on the work of scholar, Andre Johnson, and featuring key excerpts from the AME Church’s publication, The Christian Recorder, this exhibit explores the social and political influence for which Bishop Turner became best known.

Ohio was home to many well-seasoned activist men and women who defied the Fugitive Slave Act. As crucial stopovers for fugitives, Cincinnati and other outlying cities became places of refuge where Black residents mobilized to aid escaping enslaved men and women. This exhibit delves into the lives and contributions of Black Ohioans and the Convention of the Colored Men of Ohio in 1858. Attendees such as Charles H. Langston, the grandfather of poet Langston Hughes, willingly broke the Fugitive Slave Law and faced legal repercussions as a result. The 1858 convention is especially notable for its inclusion of women. Frances Ellen Watkins [Harper] was among the many Black women who animated this historic gathering.

Formerly titled: Conflict on the Ohio: The 1858 Convention in Cincinnati

The Colored Conventions and the Carceral States

This exhibit explores the Colored Conventions movement’s protest against the justice systems of the states of California and Georgia, both of which egregiously targeted African Americans to carry out forms of ethnic cleansing and labor exploitation. It also looks at the legacy of this protest, exploring the contributions of Black women reformers who continued the resistance against incarceration.

The “Conventions” of the Conventions: The Practices of Black Political Citizenship

From rules of conduct to women’s roles in convention procedure, this exhibit illustrates the ways “embodied rhetorics” reflect Black delegates’ performance of citizenship. Focusing on rituals of Colored Conventions—the carefully crafted actions delegates and audience members perennially repeated – it traces the “conventions” of conventions. By examining political rituals across decades, particularly before and after the Civil War, it helps establish how convention procedures developed. More broadly, this exhibit explores the question of why political rituals became established, and immensely popular, traditions among delegations.

Formerly titled: The “Conventions” of the Conventions: Political Rituals and Traditions

Four years after tense debate in the 1843 Buffalo Colored Convention, Henry Highland Garnet and Frederick Douglass again took opposing stances in the 1847 National Convention. This exhibit looks at the debates and discussions surrounding the adoption of a National Printing Press. While many delegates supported it, others, including Douglass, questioned how they would sustain such press. This exhibit also explores news coverage surrounding the 1847 convention as well as the issue of voting rights as tied to land ownership.

Formerly titled: A National Press?: The 1847 National Convention and the North Star

“Equality Before the Law” explores the activist efforts of Black Californians who confronted laws and policies that targeted African Americans. This exhibit contextualizes the Colored Conventions held in California, showing critical events that had a direct impact on African Americans’ quest for civil rights in the state. It also centers the lives of Black Californians who made lasting contributions to the movement.

The Fight for Black Mobility: Traveling to Mid-Century Conventions

Travel in 1855 required a great deal of time, money, and effort. Still the year’s national Colored Convention in Philadelphia attracted over 120 Black men and women delegates from across the country. Two stand-out moments at the convention consumed news outlets: the controversy surrounding Mary Ann Shadd Cary’s delegacy and George T. Downing’s letter-burning stand against colonization schemes. Both events take place in the midst of heightened debates about emigration and acute violence targeted at Black neighborhoods in Philadelphia and beyond. This exhibit describes lecture stops and the messages itinerant intellectuals espoused, particularly those connected to the Philadelphian delegation. Where did these public speakers go and what do they say while there? From convention celebrities to media outlets and lecture circuits, explore the centrality of migration and information exchange to community organizers.

An Introduction to the Colored Conventions Movement, 1830-1890s

New to the rich history of the Colored Conventions movement? Read a brief introduction that complements the following exhibits. What events led to the first Colored Convention? What were the prominent topics of debate? How are Black women connected to the movement? Learn more about the big picture.

The Meeting that Launched a Movement: The First National Convention

The inaugural 1830 National Colored Convention in Philadelphia eludes simple categorization. Why is it so widely accepted by scholars and organizations as the foundational meeting for a movement that would last for seven decades? This exhibit tackles questions about the origins of the Colored Conventions movement by examining three important differences between the 1830 Convention and subsequent national conventions in Philadelphia between 1831 and 1835.

Formerly titled: The First National Convention: The Meeting That Launched a Movement

The delegation of the 1843 National Colored Convention proclaimed Black people’s entrepreneurial pursuits, occupations and personal wealth reinforced their place within American society. Still, the 1843 convention remains best known for Black reverend and activist Henry Highland Garnet’s speech called, “Address to the Slaves of the United States,” and the heated debates it sparked about slave insurrection.This exhibit exposes readers to the narratives, economic dispositions and cultural materials central to the 1843 convention, including Black women’s often unrecognized contributions.

Stake Claim or Take Flight: The Birth of Southern Conventions after the Civil War

The end of the Civil War brought new hope and opportunities for social and political organizing into the lives of Black southerners. Charting Colored Conventions from just after the Civil War in 1865 to the Exoduster Movement in 1879, this exhibit uncovers the patterns and trends of postbellum southern Colored Conventions. The minutes of southern Colored Conventions are crucial to understanding Reconstruction, Black political and educational efforts in the late nineteenth-century, the organizational roots of the Niagara movement (which led to the NAACP), Marcus Garvey’s Black nationalism, and how “internal emigration” or “intra-national emigration” was linked to the Great Migration.

To Stay or To Go?: The 1854 National Emigration Convention

Formerly titled: To Stay or to Go?: The National Emigration Convention of 1854

What Did They Eat? Where Did They Stay?: Black Boardinghouses and the Colored Conventions Movement

This exhibit exposes readers to a broader spectrum of the spaces and forms of political activism connected to Colored Conventions by considering a broader spectrum of women’s work within the home. A visual complement to Psyche Williams-Forson’s essay, “What Did They Eat? Where Did They Stay?,” this exhibit features menus, interior settings and biographical reviews that bring greater attention to Black women’s political engagement in convention cultures.

Discussions about African American education dominated national Colored Conventions in the pre-Civil War era. African American activists believed that basic and advanced schooling would lead to social, political, and racial equality. Early schools, however, often only targeted African American men. At the 1853 National Colored Convention in Rochester, a plan was introduced to break this trend, proposing a manual labor school to serve Black men and women, alike. Discover how Black leaders pivoted from ignoring Black women’s access to higher education to advocating for greater acceptance of co-educational models and women’s activism. The exhibit draws from scholar Kabria Baumgartner’s work and a stunning collection of historical artifacts.