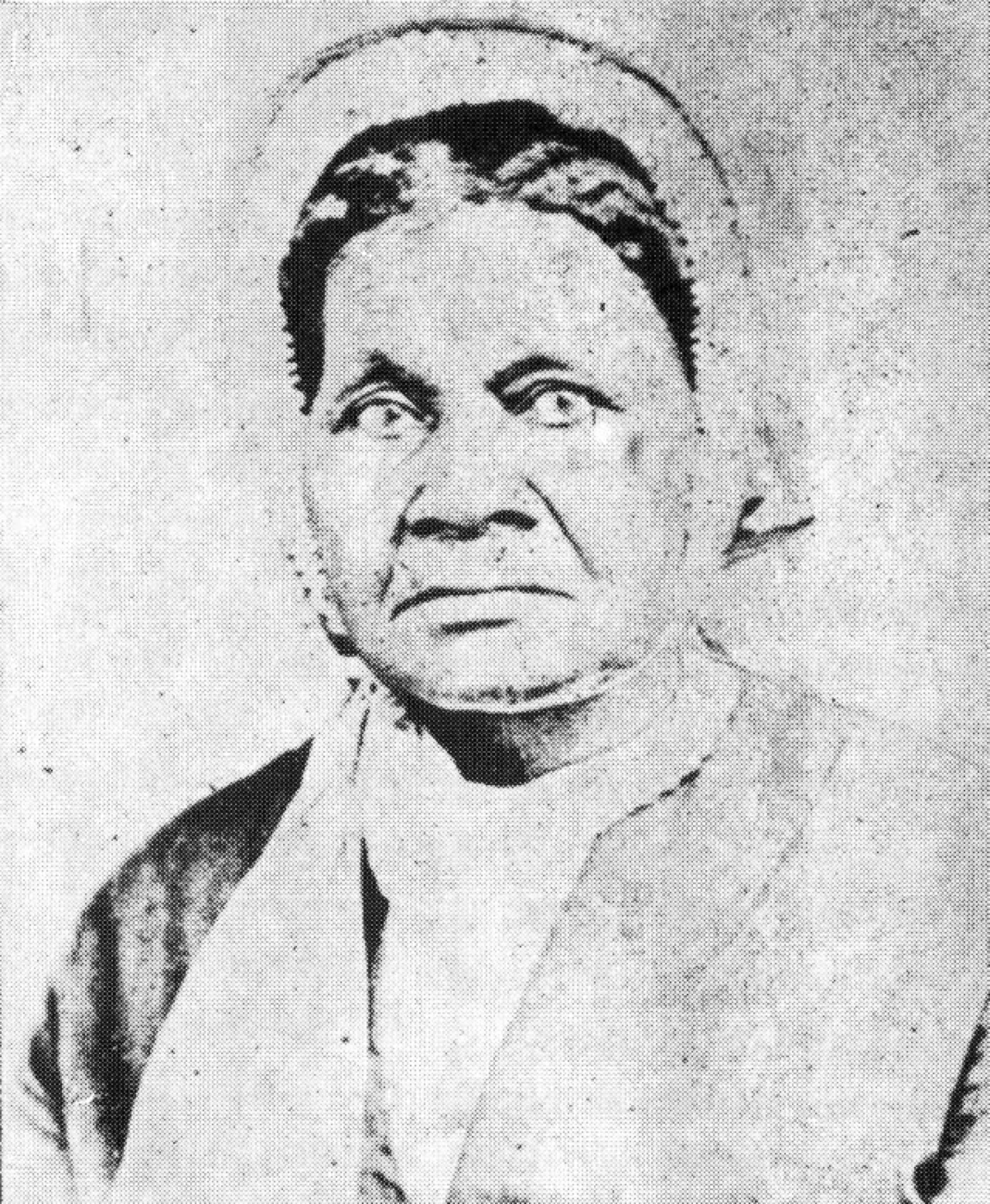 “In Priscilla Baltimore’s bed-room that night was organized the first African Methodist Church in the West.”

Priscilla Baltimore purchased her own freedom and then labored tirelessly for the freedom of others. She was born around 1801 in Bourbon, Kentucky. Her mother was an enslaved woman and her father a white enslaver. As Rev. T. W. Henderson recounted at her funeral in 1882, Baltimore was first sold at the age of eight, then sold a second time, and finally sold to a Methodist missionary who brought her to the St. Louis area. There, Baltimore converted to Methodism and began preaching to enslaved women and men.1

After about seven years of laboring in St. Louis, Baltimore had saved enough money to purchase her own freedom from the Methodist preacher. Oral histories tell us that to purchase her mother’s freedom, she bought and mortgaged property in St. Louis. While there, she also married Louis Coontz, who died of cholera just three weeks after they wed. She then married John Baltimore, an enslaved man, who went on to help her found the town of Brooklyn, Illinois, after she purchased his freedom as well. In addition to paying for her freedom, Baltimore was required to post a bond of $500 for a “license to reside in the State of Missouri.”2

In the late 1820s, accompanied by Baltimore, eleven Black families crossed the Mississippi River. Some were enslaved and some were free, but all sought new opportunities in the nominally free state of Illinois. This group of Black migrants started the town of Brooklyn, Illinois, in 1829. Priscilla and John’s home became their place of worship. William Paul Quinn, a traveling A.M.E. minister, visited the town in the 1830s and helped establish what would become known as the Brooklyn A.M.E. Church, the “first African Methodist Church in the West.” In the early 1840s, John and Priscilla bought several pieces of land in town, one of which became the site of the church.3 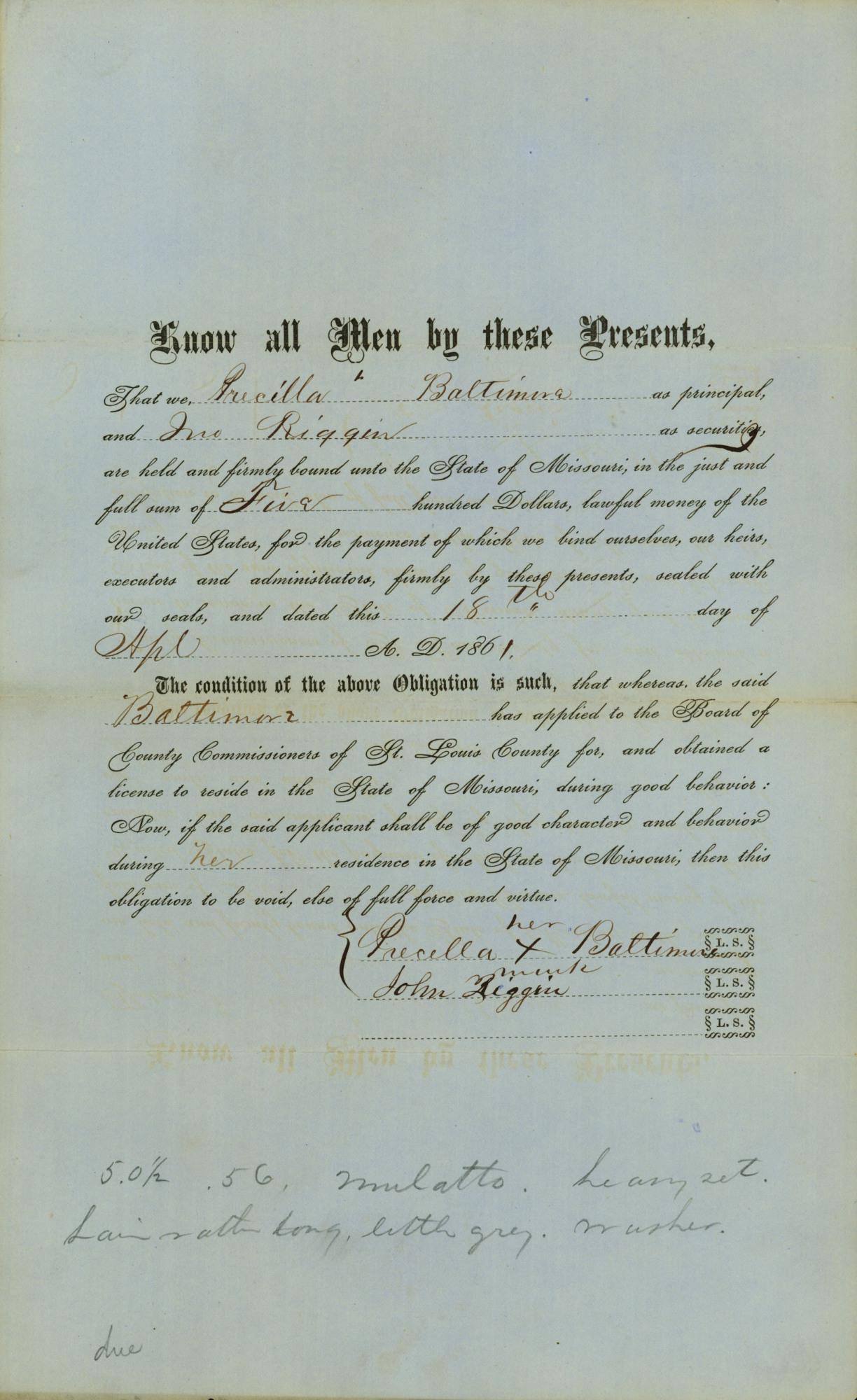 Priscilla Baltimore’s Free Bond, 1861
Priscilla Baltimore obtained a license to live in St. Louis County, Missouri, in 1861. This document shows that a man named John Riggin posted a bond of $500 so she could receive the license. Baltimore signed the agreement with an “X” as “her mark.” (Source: Courtesy of Missouri Historical Society Collections)

Priscilla Baltimore helped make the town of Brooklyn a refuge from enslavement. Though her home “would have been a very small house,” without any sort of plumbing and a cistern for rainwater, wrote archeologist Joe Galloy, it was a major site of resistance to slavery. “She understood from firsthand experience,” wrote historian Cheryl LaRoche, “the costs of both slavery and freedom.” Her abolitionism earned her the sobriquet the Moses of the West.4 One story particularly exemplifies the dangers residents faced as they stood up to the institution of slavery.  A fugitive was sheltering with a Black Brooklynite named William Carper when slavecatchers rode into town. Determined to recapture the runaway, they murdered Carper. Priscilla Baltimore’s adopted son, Milton Carper, may have been the child of this martyr to the cause of freedom.5

The town of Brooklyn was incorporated in 1873, officially becoming the first “Black town” in America.6 Meanwhile, Baltimore moved back to St. Louis by the 1870s, pursuing lawsuits to recover real estate she had lost in Brooklyn, working as a domestic, and becoming involved with civic life in the city. After her husband passed away, she lived with her adopted son, Milton, who worked as a laborer.7

Baltimore died in 1882, leaving $2,000 to the A.M.E. Church of St. Louis.8 Her funeral filled the large St. Paul’s A.M.E. Chapel, another congregation Baltimore had helped organize.9 Even the “stairways were filled with a mass of spectators,” reported the St. Louis Globe Democrat. “The outpouring was the largest of its kind ever seen in this vicinity,” continued the article, “and was a manifestation of respect to the memory of Mother Baltimore… whose life was replete with well-doing and adventure.”10 She rests in the now free soil of Bellefontaine Cemetery in St. Louis.