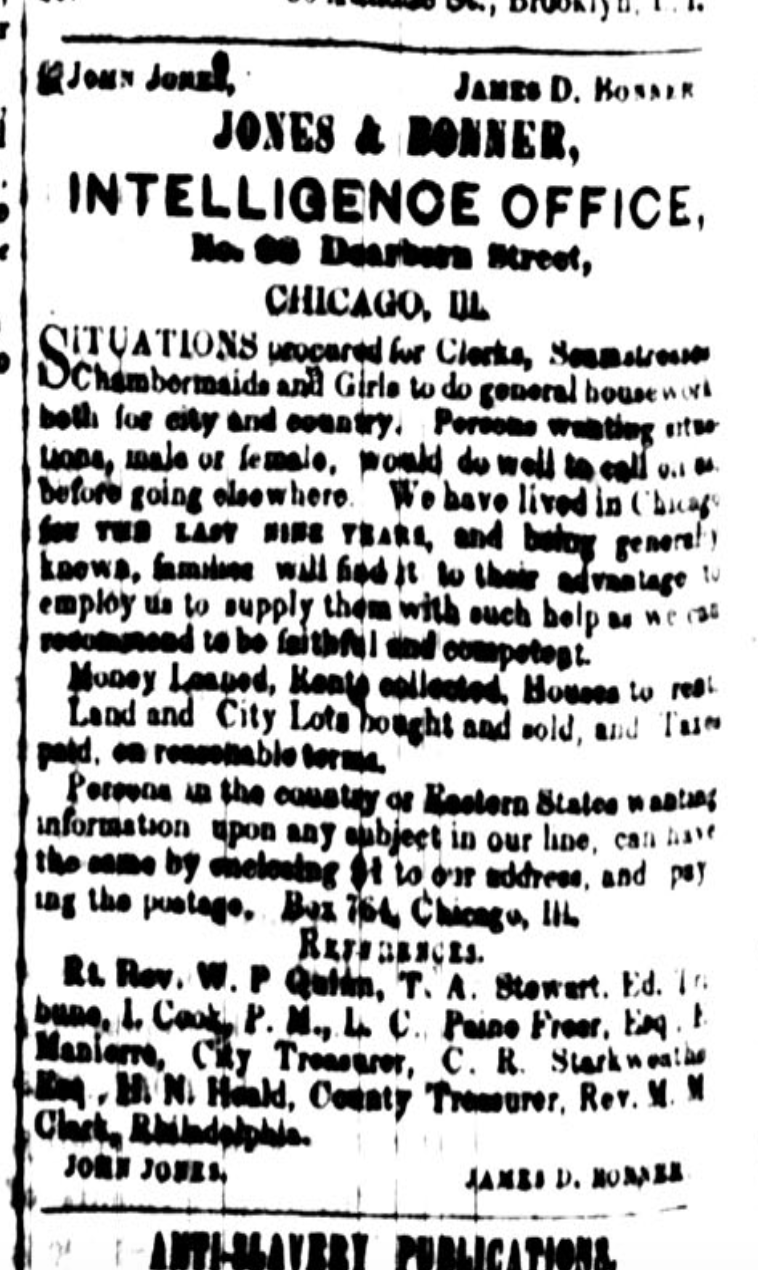 “‘Tis but too apparent, I fear, that Illinois is not yet sufficiently christianized and repentant, as to do justice to her disfranchised but loyal citizens.”

James D. Bonner was a prominent Chicago activist in the early 1850s. Very little is known of his early life. He was born in North Carolina and, according to family history, his mother was Native American and his father was white. Bonner married Mary Louisa Bogle, the daughter of Robert Bogle of Philadelphia, who was born enslaved but later became a prominent chef. In fact, W. E. B. Du Bois credited Bogle with inventing the business of catering.1 James and Mary had four children: Galila Virginia (b. 1836), Isabella Julia (b. 1838), Rosalie Amelia (b. 1841), and Percy W. (b. 1850)

James and Mary Louisa Bonner moved to St. Louis in the 1840s and settled in Chicago by the early 1850s. James Bonner quickly became involved in Chicago’s busy and growing Black freedom movement. He chaired the May 1853 meeting in Quinn Chapel where Black Chicagoans resolved to hold a state convention. Bonner told the Western Citizen that the plan was to “take action” for the purpose of “awakening our dormant powers, arousing our energies, and bringing about a more general activity in the work of our own redemption.”2

Bonner became involved in the national convention movement when, in July 1853, he traveled with John Jones, Henry O. Wagoner, and Byrd Parker to the National Colored Convention in Rochester, New York. At that meeting, delegates organized the “National Council of the Colored People,” and Bonner was elected Vice President.

Returning to Chicago, Bonner served as a Cook County delegate at the statewide convention in Chicago in October 1853. Bonner also sustained his efforts in the national movement, traveling to New York City two months later to convene with the National Council. There, he argued vehemently for establishing a coeducational American Industrial School for Black students.3 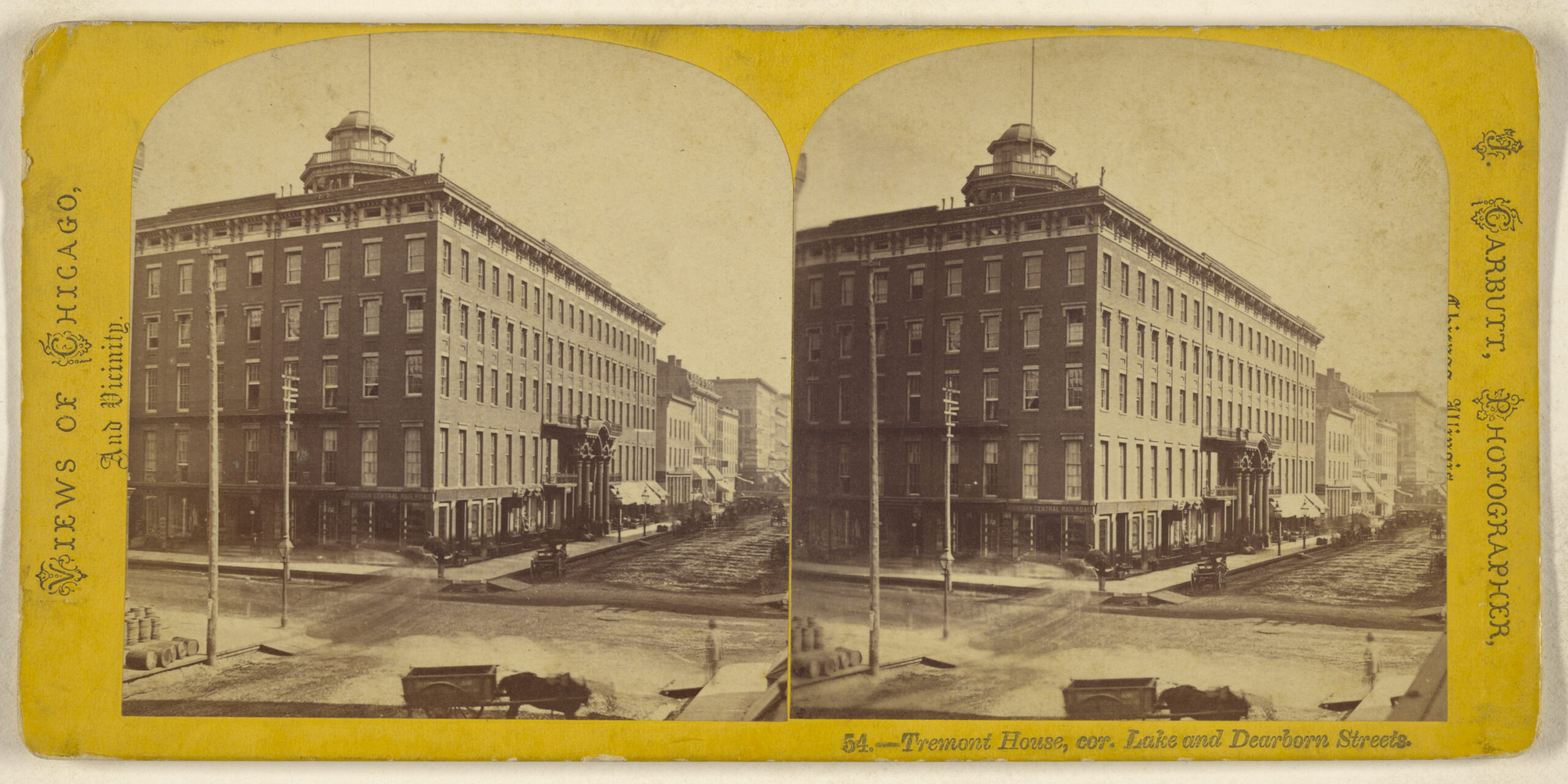 Tremont Hotel Block, circa 1865
An 1865 photo of the the Tremont block on the corner of Dearborn and Lake streets, where James D. Bonner had his “gentleman’s clothing store” in the 1850s. (Source: Courtesy of The J. Paul Getty Museum, John Carbutt photographer, Gift of Weston J. and Mary M. Naef.)

James Bonner sought to empower Chicago’s Black residents through community building and mutual aid. He helped raise money to fund construction of the new Quinn Chapel in 1853, collecting subscriptions at his “gentleman’s clothing store in Tremont block.” In 1854, he and Jones opened an “Intelligence Office” on Dearborn Street. The pair promised to help African Americans arriving in the city procure positions as “Clerks, Seamstresses,” and “Chambermaids.” They also loaned money and rented houses. Bonner expressed outrage in 1855 when Illinois Governor Joel A. Mattson urged the state legislature to appropriate funds to white-led colonization efforts. He advised Frederick Douglass that their movement must “strangle this Southern monster—this colonization humbug—‘tis the greatest obstacle in the way of the colored man’s elevation in the United States.”4

The mid-1850s also brought great loss to the Bonner family. James’s wife, Mary Louisa, passed away from tuberculosis in April 1854, and the couple’s daughter, Isabella, died of the disease months later, at just 16 years old. Despite the sorrow he must have experienced, Bonner kept fighting. He remarried in the fall of 1855. That September, he informed readers of Frederick Douglass’ Paper that Stephen A. Douglas, the Illinois senator who had (in)famously masterminded the 1854 Kansas-Nebraska Act  was “now shamed and loathed” by the people of Illinois. Illinoisans were hopeful, Bonner wrote, “that in a short time we will have a Senator who will utter in Congress, the true sentiments of his constituents.”5

Sadly, James D. Bonner’s new marriage as well as his activism were cut short by his sudden death from typhoid, a bacterial infection, in December of 1855. His death shocked and saddened Henry O. Wagoner, who eulogized Bonner in the pages of Frederick Douglass’ Paper. “In my humble opinion,” wrote Wagoner, “we, of Illinois, have lost one of our brightest stars, and, perhaps, strongest man in a public way… He was thoroughly imbued with the spirit of Liberty for all mankind. And he was ever ready and willing to make any reasonable sacrifice in doing what he could for the oppressed and proscribed of our own land.”6