Delegates and THeir Families

Introduction to the Profiles

Our team researched several families associated with the Colored Convention that met in Chicago in 1853, as well as a few other Black Illinoisans who participated in the struggle for racial justice in this period.

Many of the delegates and their spouses were born in slaveholding states. The 1850 U.S. Census was the first to inquire about individuals’ state of origin. The information gathered by enumerators helps us see patterns of African American migration into Illinois from Upper South states such as Virginia, Kentucky, Tennessee, and Missouri.

Census records showed that many male delegates were self-employed and had a special skill or trade, and many owned real estate or personal property. Yet our research was far from comprehensive. Unskilled laborers, people without property, and people who frequently changed residences are especially difficult to locate in the Census and other written records. The most prosperous delegates (and in some cases those with the most distinctive names) are therefore overrepresented in our profiles.

In Chicago in particular, Black men who had learned a skill or practiced a trade could make enough money to invest in the booming real estate market. Among the Chicago activists who owned a business or practiced a trade were John Jones, a tailor; Henry O. Wagoner, who had learned typesetting and also owned a mill and produce depot; Lewis Isbell, owner and operator of two of Chicago’s three bathhouses; and Reuben H. Rollins, who owned a confectionary store. Delegates from outside Chicago included farmers, grocers, and blacksmiths.1

A striking number of delegates worked as barbers at some point in their lives, including Spencer Donegan, H. Ford Douglas, Lewis Isbell, Robert J. Robinson, Job Vincent, and Henry O. Wagoner. Barbering was a unique occupation for Black men in this era because it was a skilled trade that white men mostly did not practice. Men from different socioeconomic and racial backgrounds visited barbers regularly, not only to get their hair cut, but to get a professional shave with a straight razor. Some Black barbers served a prosperous white clientele, opening opportunities to make good money and develop helpful connections.2

Many of the convention delegates were Baptist or Methodist ministers. Among the clergymen who attended the 1853 convention were Robert J. Robinson and Hezekiah Ellsworth from Alton, Andrew W. Jackson from Morgan County, and Henry Brown, who represented Edgar and Coles County. Chicago delegates included ministers Abram T. Hall and Byrd Parker. An A.M.E. minister from Galena, Richard Harvey Cain, became a prominent politician in South Carolina during Reconstruction. 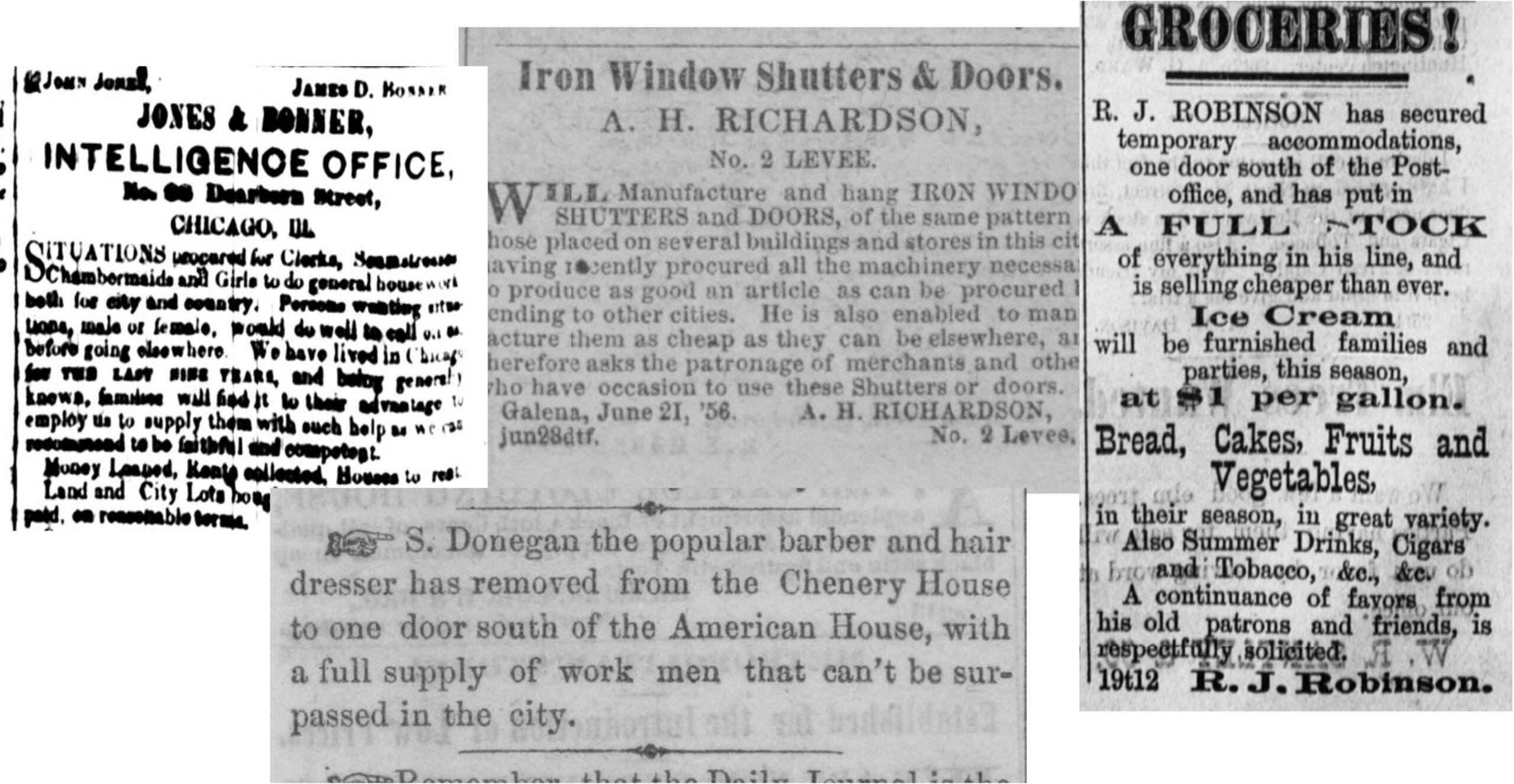 The female family members of convention delegates were a critical part of the convention and activist landscape. Some women helped operate family businesses. In Chicago, for example, Susan Wagoner operated the mill adjacent to her family’s home, while near Alton, Eleanor Johnson helped run her family’s farm. Increasingly in the 1850s and 1860s, women formed their own activist organizations. Mary Richardson Jones and Sattira Douglas were leaders of the Colored Ladies Freedmen’s Aid Society of Chicago, which raised money to help families of Black soldiers as well as freedpeople during the Civil War. Women were also at the forefront of demanding equitable access to public education in Chicago in the 1860s, as shown by the stories of Anna Hudlin and Mary Mann. Regardless of their occupational status or public activism, Black women performed the crucial work of running households and caring for children and the elderly. That work at home made it possible for their husbands, brothers, uncles and sons to lead churches, attend conventions, and build organizations that demanded change.

The people we have profiled were undoubtedly more economically secure than most Black Illinoisans of the era. Yet, as historian Patrick Rael pointed out, the northern African American population had  a “compressed social structure.” That is, among northern Black people, differences in wealth and education between the wealthiest and poorest people were far smaller than among white people or even among southern free Black people.3 Across Illinois and the rest of the free states, the vast majority of African Americans labored in positions requiring no specialized skills and did not have enough money to buy real estate. But the compressed social structure—combined with ongoing racial discrimination that all African Americans faced—helped Black Illinoisans make common cause with one another despite their differences. White racism, Rael wrote, “mandated the need for unified political action and hence a unified social identity.”4