Black Chicagoans developed religious institutions that became hubs for the community and wellsprings of activism. Early Black congregations often met in people’s homes until they had enough money to purchase a plot of land and construct a building. Church buildings provided venues for worship but also for education, recreation, and political organizing.

Black Methodists in Chicago formalized their connection with the A.M.E. Church in 1847, and by 1850, the congregation was a center of education and civil rights organizing.

In September of 1850, Quinn Chapel A.M.E. Church hosted a meeting of more than 300 Chicagoans, Black and white, who gathered to organize resistance to the federal Fugitive Slave Act. They decided to create patrols that would search out slavecatchers who came to Chicago and warn residents of their presence. Weeks later, the Chicago City Council passed resolutions declaring that city officials would not help enforce the repressive new law. 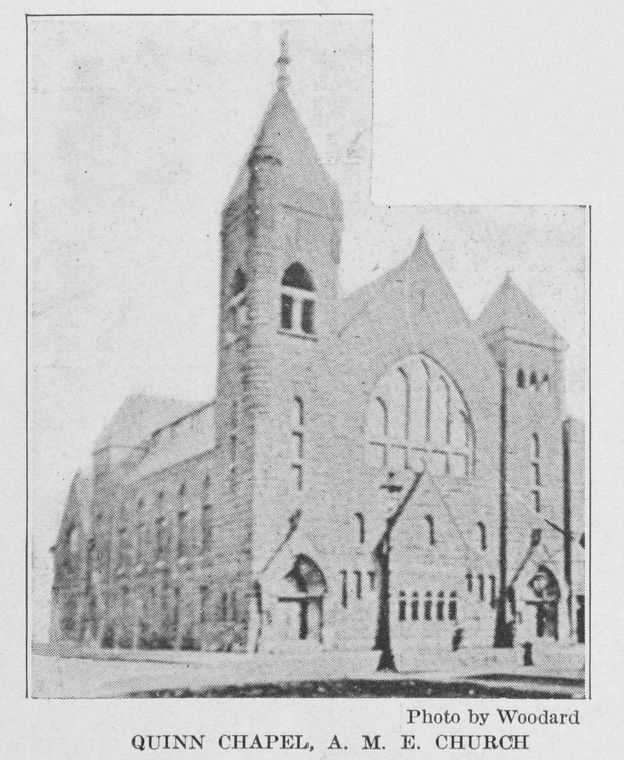 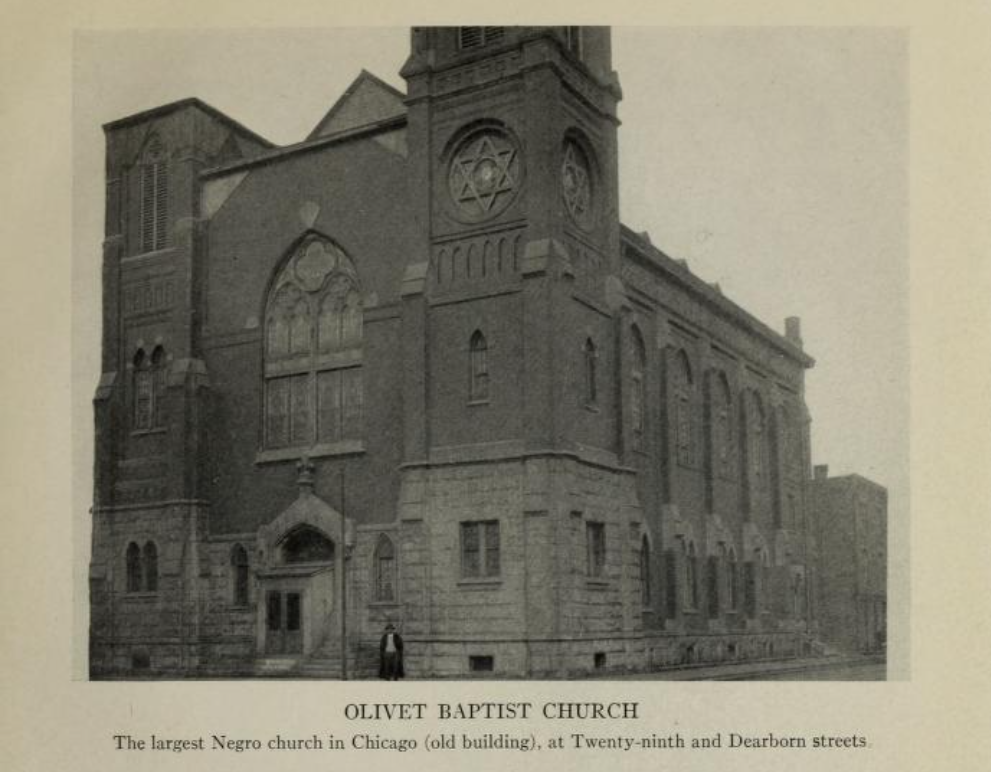 Olivet Baptist Church
Photograph of Chicago’s Olivet Baptist Church at 27th and Dearborn, where the congregation gathered beginning in 1893 before moving to its current location at 3101 South King Drive in 1918 . (Source: Chicago Commission on Race Relations, The Negro in Chicago; a study of race relations and a race riot [Chicago: The University of Chicago Press, 1922], 140. Courtesy of Internet Archive.)

During 1853, Quinn Chapel’s congregation raised funds to erect a new church, which they consecrated on November 20th of that year. Bishop William Paul Quinn, the church’s namesake, presided over the event, along with the A.M.E. Church’s General Book steward, Rev. Molliston Madison Clark. One of the earliest events hosted in the new building was a lecture on “Woman’s Rights” by Rev. Clark. The new Quinn Chapel, described as “large and commodious,” became home to a literary and debating society. Befitting the church’s role as a space for political organizing as well as religious worship, in January of 1854 Black Chicagoans gathered there and resolved that they “mean to remain here” and fight for their rights as Americans.1


Black Baptists in the city also became increasingly organized during the 1850s. The first known African American Baptist church in the city was established in spring 1853, when Elder R. J. Robinson visited from southwestern Illinois. He was a leader and traveling agent of the Wood River Association. Robinson held several meetings among Black Chicagoans, and by the time he left town, they had established Zoar Baptist Church.2