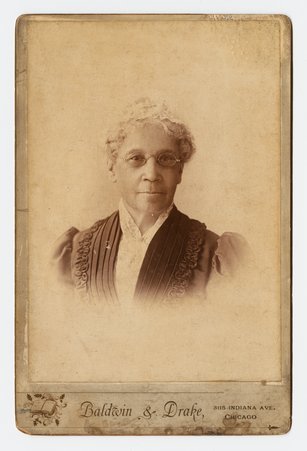 “We want more justice to women.”

Mary Jane Richardson Jones lived eighty-nine years and was a leading figure among Black Chicagoans. During her long life, she was active in abolitionism and women’s rights, and she ultimately became one of the city’s wealthiest and most respected Black women. “In her own field she made Chicago history,” wrote her granddaughter, Theodora Lee Purnell, in 1955.1

Mary was born free in Tennessee in 1820, one of nine children of Diza Morris and Elijah Richardson. Several of the siblings led interesting lives, including Alfred Richardson, a founder of Black Baptist churches in Illinois and delegate to the 1853 Chicago convention.2

Mary and her family were living in Memphis, where her father worked as a blacksmith, when she met the young John Jones. The Richardsons moved to Alton, Illinois, in 1837. John Jones soon joined them, and John and Mary married in 1841. Their first child, Lavinia, was born two years later. In 1845 the small family decided to start a new life in Chicago.3

In Chicago, Mary and John sheltered fugitives from slavery in their home and hosted Frederick Douglass when he was in town. Through Douglass they came to know the white radical, John Brown. Years later, Mary recalled having told her husband that she thought Brown, who had planned to provoke a violent revolt against slavery, was “a little off on the slavery question.” Still, she reported, she and her husband opened their doors to Brown as he passed through Chicago. Her granddaughter remembered that Mary “stood guard at the door… with the slaves huddled below in her basement.”4 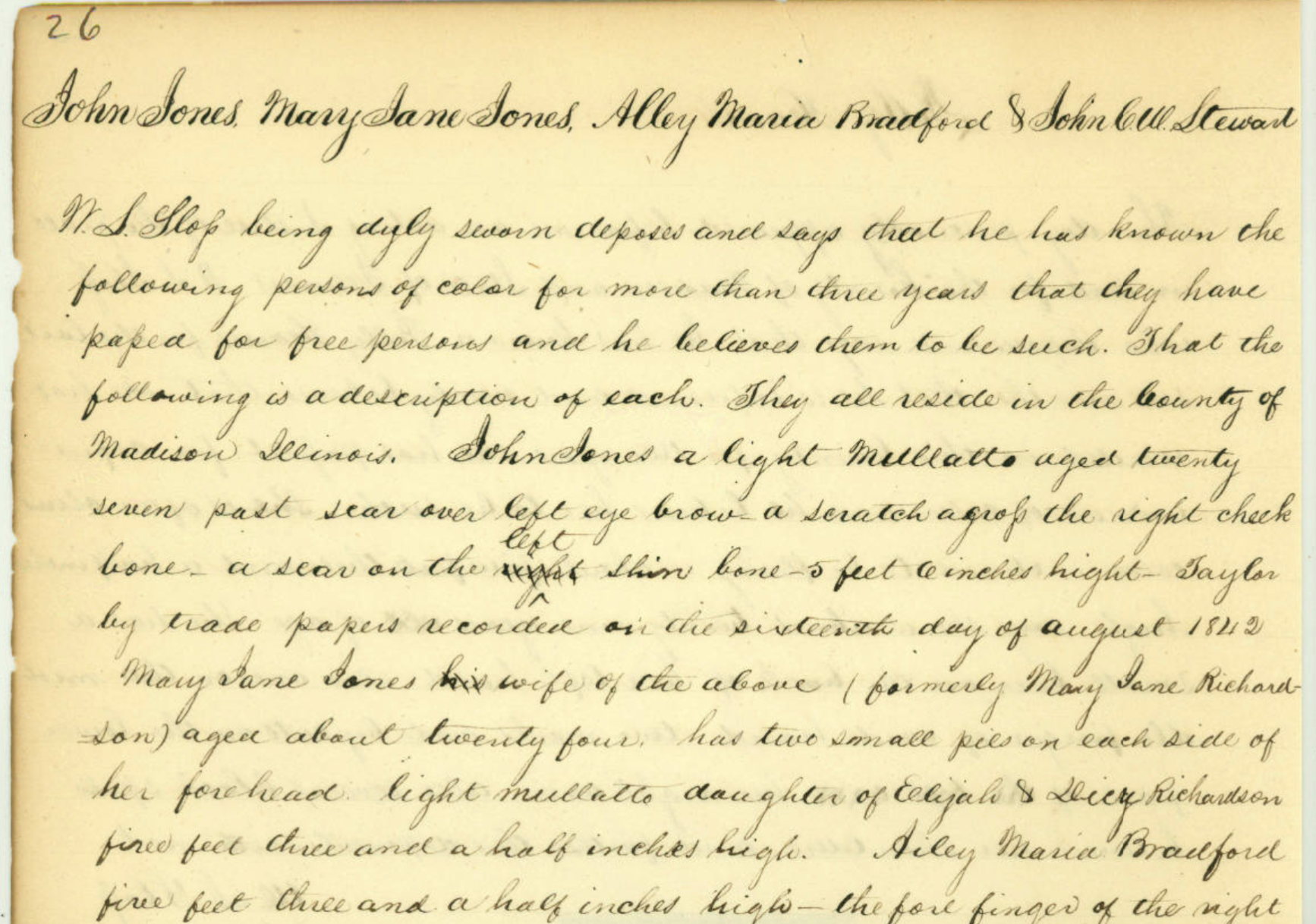 Registration of Mary and John Jones, 1844
In 1844, as required by state law, John and Mary Jones went before the Madison County Clerk to register as free Black people. A white resident had to give a sworn deposition on their behalf. (Source: Slave Emancipation Registry Book #3 1840-1860, Courtesy of Madison County Circuit Clerk Digital Collections)

During the Civil War, Mary Jones served as president of the Colored Ladies’ Freedmen’s Aid Society of Chicago. In that role, she worked with Sattie Douglas and others to collect money and donations for the families of Black soldiers and to send supplies to freedpeople in the south. Among its many activities, in 1864, the organization hired Mary Ann Shadd Cary — an editor, abolitionist, and women’s rights advocate — to work as a traveling fundraiser.5

After the war, in the summer of 1865, Susan B. Anthony came to Chicago and lectured in Quinn Chapel A.M.E. Church. Mary Jones introduced Anthony as someone who did not need “to have her father or brothers starved in Southern prisons, to make her aware of the humanity of the Black man.” The topic of Anthony’s lecture was “Universal Suffrage.” In it, she argued that women, as well as men, should have the right to vote regardless of race.6

After John Jones died in 1879, Mary remained a prominent part of African American civic life in Chicago. As a result of real estate investments made during John’s lifetime, she was one of the wealthiest Black people in the city. Mary was known as a gracious hostess of events at her home at 43 Ray Street. In the late 1880s she became a leader of the Prudence Crandall Literary Club, which held literary discussions, lectures, and musical performances. The Black writer Fenton Johnson later recalled that from the 1860s to the 1890s, “Negro society in Chicago . . . revolved largely around her. She was a stern dictator, quite austere in her leadership.”7

Mary Jones’s significance in Chicago was evident to younger generations of politically engaged Black women, including Fannie Barrier Williams and Ida B. Wells. Williams, for example, was thirty-five years younger than Jones. Yet the two women collaborated to lead the women’s branch of the Prudence Crandall Literary Club. The women’s group focused on challenges facing women and girls and discussed strategies for social reform. “We want more justice to women,” Jones told a newspaper reporter in 1888, “and more virtue among men.”8

In 1893, the World’s Columbian Exposition brought new energy to Black Chicago. Ida B. Wells traveled from New York to attend. Wells, who was forty-two years younger than Jones, had spent much of her life in Memphis but had fled amid death threats after she began airing the truth about racist violence, particularly lynching. While in Chicago for the exposition, Wells worked on organizing Black women for political work.

Wells immediately recognized Mary Jones as a figure whose presence would “lend prestige” to the Black women’s club movement. Jones consented to help but, knowing “she had no experience along those lines,” she agreed to be “honorary chairman” of a newly formed Black women’s club in Chicago. She let Wells do most of the work. Starting in the fall of 1893, the club, Wells wrote, drew “the most prominent women in church and secret society, school teachers and housewives and high-school girls.”9

All the while, Mary Jones continued to give occasional public speeches, particularly about the old days in Chicago, when she and her husband had sheltered fugitives from slavery and crossed paths with the legendary John Brown. Her granddaughter reported that she was active in philanthropy, “contribut[ing] generously to the now famous Hull House Social Service Center, to Phyllis Wheatley Home for unfortunate girls, to Provident Hospital and The Home for Aged and Infirm.”10

Mary Jones lived long enough to see the formation of a new generation of Black protest organizations, including the National Association of Colored Women, founded in 1896, and the National Association for the Advancement of Colored People, inaugurated in 1909.  When she passed away at the end of that year, the Chicago Defender praised her “charming personality” and said she had been “loved and admired by every one.”11