From the late 1830s onward, Chicago was known as a place where Black residents and white allies opened their doors to freedom seekers and helped secure their safe passage to Canada. It was a city where crowds regularly assembled to stop slavecatchers from seizing people and forcing them back into bondage.

Some rescues followed the letter of the law. In one instance, John Jones helped rescue a man named Albert Pettit. Pettit had escaped slavery in Tennessee. His enslaver chased him all the way to Chicago, but then declared his willingness to sell Pettit for a price. Jones, according to one account, “went among his friends” and raised funds to buy Pettit’s freedom. The contract Jones signed with Petit’s enslaver called human bondage “the sum of all villainies,” and stated: In “consideration of the love and affection I bear to the said Albert as a member of the family of man, I hereby release, relinquish and discharge to the said Albert any and every claim I may have to his body, soul or services . . . [and] declare him free from all personal obligations to me except such obligations as are due from every man to his fellow by the common law of humanity.”1

Click on the red dots on the map below to view the “conductors” or “station masters” of each stop.

This map of Chicago depicts the network of known Underground Railroad stops in Chicago.

The day-to-day workings of the “Underground Railroad” were necessarily secretive. In 1853, however, John Jones described some of those activities in a letter to Frederick Douglass’ Paper. “The underground Railroad is doing a fair business this season” he wrote. “We received eleven passengers last night, and two the night before.”2

Black Chicagoans were known for their readiness to shelter fugitives. Black women’s contributions often went unmentioned in public accounts, but oral historical traditions preserved the memory of a group of leading women. Known as the “Big Four,” these women were associated with Quinn Chapel and gained renown for their tireless work helping on behalf of freedom seekers. Though the identities of some of these women are uncertain, one possible member was a woman referred to in an early history of Chicago as “Aunt Charlotte.” The author of that history, a white woman, remembered one instance in which Aunt Charlotte daringly sheltered more than a dozen fugitives in her home. She kept the house shuttered and dark until two in the morning, when the freedom-seekers arose and continued their journey. Emma Jane Atkinson, another of the Big Four, helped a fugitive disguise herself by blackening her red-colored hair with soot. That woman managed to elude her enslaver and escape to freedom.3 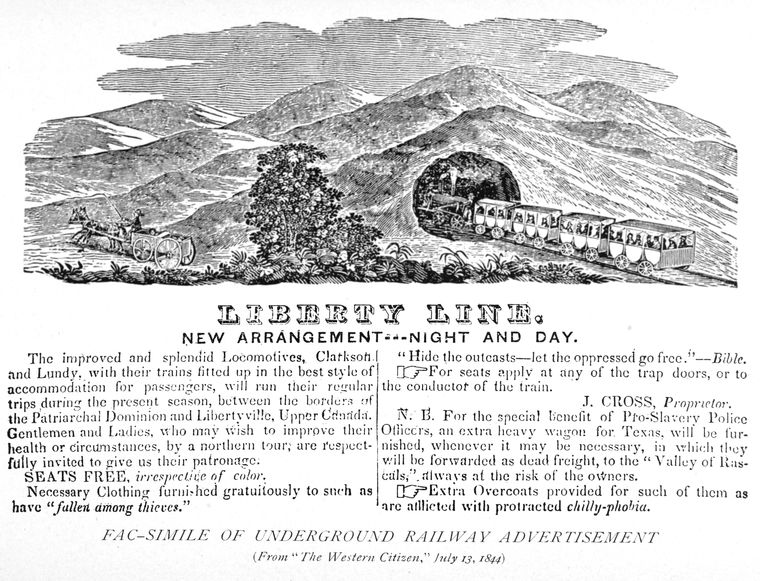 “Liberty Line,” 1844
This advertisement for the “Liberty Line,” or Underground Railroad, appeared in the Chicago abolitionist paper The Western Citizen on July 13, 1844. (Source: From The New York Public Library.)

Mary Richardson Jones helped make the Jones’ home renowned as a haven for freedom seekers. She later remembered opening their doors to the radical, John Brown, when he passed through Chicago. She also recalled receiving funding for the transportation of fugitives from Alan Pinkerton, another white abolitionist.4

The history of Chicago contains countless stories of collective organizing to secure people’s freedom. Some involved crowd actions. For instance, in 1854, a slavecatcher who had traveled to Chicago in search of three people who had fled bondage in Missouri reported that when he spotted one of the escapees on the street, a “boy gave the alarm, and in less than ten minutes there was a mob of from one to three thousand persons on the ground.” The crowd kept the fugitives safe and ran the slavecatchers out of town, declaring that nobody could “take a negro from Chicago.”5