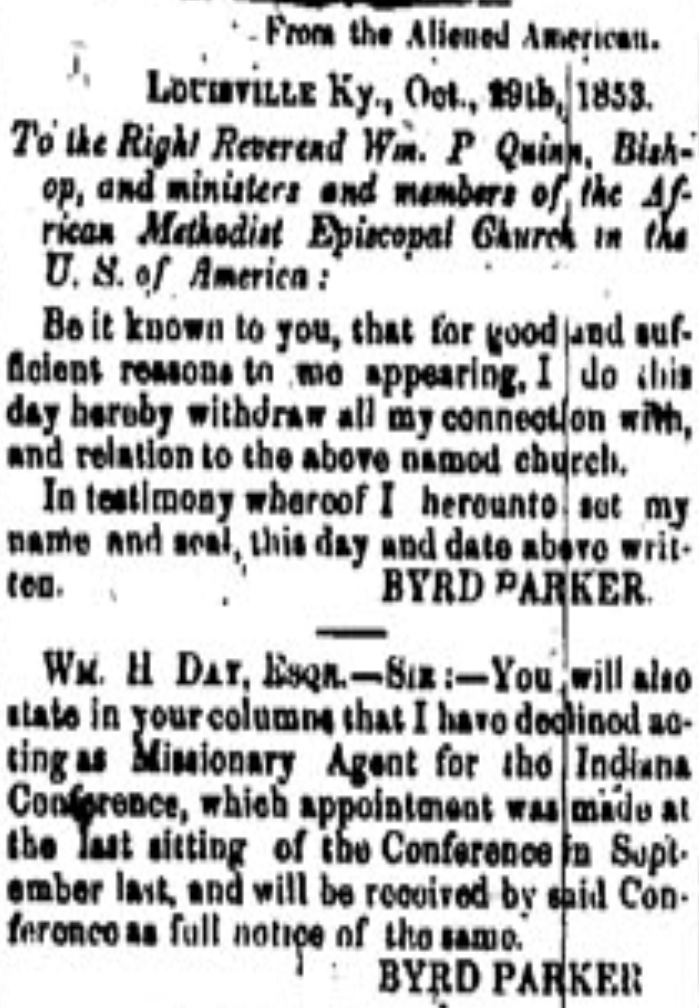 “…I do this day hereby withdraw all my connection with, and relation to the above named church.”

Byrd Parker was a pastor in the African Methodist Episcopalian (A.M.E.) Church and a committed activist whose field of work stretched across Kentucky, Indiana, Illinois, and Wisconsin.

Parker was born in North Carolina in 1815. Little is known of his early life, but in 1842 he married Caroline Carrey in St. Louis, Missouri. Somewhere along the way he became active in the A.M.E. Church, and in 1843 he helped found a congregation in Galena, in the northwest corner of Illinois. The A.M.E. leadership regularly moved pastors around, and by 1850, Byrd and Caroline were living in New Albany, Indiana, where Byrd worked as a minister. In the early 1850s, he led an A.M.E. Church in Louisville, Kentucky.1

Parker soon transferred his energies to Chicago where, according to one account, he established a school for Black children in 1852. He was among the initial organizers of the 1853 Illinois Colored Convention, and in the summer of 1853, he served as an Illinois delegate to the national convention hosted by Frederick Douglass in Rochester, New York.2

From October 6 to 8, 1853, Parker and other Chicago-based activists hosted the first statewide Black convention in Illinois. Parker was a vocal participant. He led some of the opening prayers, engaged in debates, and gave an address that was described as “amusing and effective.”3

In a surprising development, later that month, writing from Louisville, Parker announced that he was resigning from the A.M.E. Church, stating in a public letter that he did so “for good and sufficient reasons to me appearing.”4

His resignation was likely related to personal issues that soon became public. In late 1853 or very early 1854, Parker married Jane Johnson. The problem was that he remained married to his first wife, Caroline, who traveled to Chicago and urged officials to charge Byrd with bigamy. The case went to trial in March 1854. Parker claimed he had tried to divorce Caroline because she had been unfaithful, but St. Louis authorities had refused to grant the divorce, saying the marriage was not valid because he had been enslaved at the time he married. Available sources haven’t allowed us to piece together what really happened here.5

Concerned that Parker’s reputation would be ruined, leading Black Chicagoans including Henry O. Wagoner, John Jones, and Lewis Isbell published a statement of support for Parker in the Chicago Tribune. After considering the evidence, the jury was unable to render a verdict, and the state’s attorney simply dropped the case.6

In 1855, Byrd and Jane Parker moved to Oshkosh, Wisconsin. Byrd opened a restaurant and continued his advocacy, encouraging Wisconsin audiences to support Black men’s right to vote. He died in 1860 while delivering a speech, collapsing on the platform from a lung condition. He left behind his widow and three children, the youngest just one year old. The oldest of those children grew up to become Lillian Thomas Fox, a prominent Indianapolis journalist and clubwoman.7 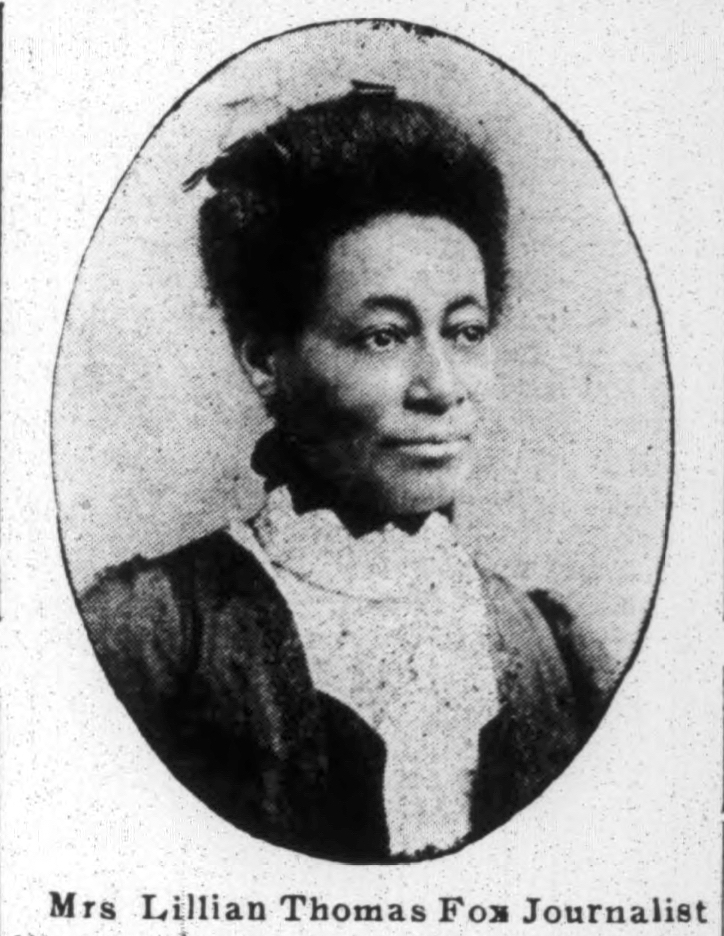 Lillian May Parker Thomas Fox, 1905
Lillian was the daughter of Byrd and Jane Parker. She was a prominent journalist, activist, and club woman, and became the first African American journalist to write regularly for a white newspaper (the Indianapolis News) in Indiana. (Source: Courtesy of Wikimedia Commons)