Illinois was infamous throughout the free states for its anti-Black policies. The Illinois legislature updated and intensified the state’s racist laws from the 1820s through the 1850s. In addition to requiring that Black people register with local officials and criminalizing African Americans’ public assembly, state laws barred Black people from testifying in court cases involving whites and promised public education to white children only.1

In some locales the laws went unenforced. Still, the Illinois black laws made clear that free African Americans were not welcome in Illinois and not entitled to the same basic rights as white residents.

The Northwest Ordinance of 1787 had declared slavery illegal across the entire region (what is now Ohio, Indiana, Michigan, Illinois, and Wisconsin). The Ordinance proclaimed: “There shall be neither slavery nor involuntary servitude in said territory.”2 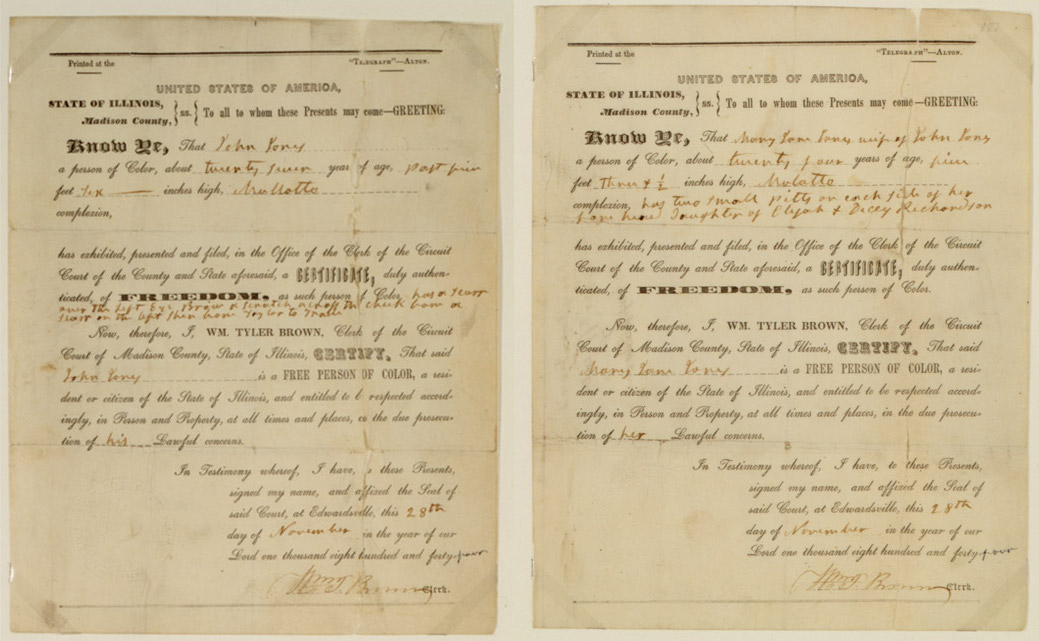 Yet race-based slavery already existed in many places. French colonists had enslaved Native Americans and Africans since the eighteenth century, and British officials had continued the practice.

After the United States became an independent nation, enslavers implemented “term slavery” to get around the Northwest Ordinance’s ban on slavery. They brought enslaved people into the state and required them to enter contracts to labor without pay for extended periods of time — sometimes well beyond their life expectancy or as long as ninety-nine years.

Black people and white allies fought against these coercive practices. African Americans sometimes went to court to sue for their freedom, and increasingly they won. In the 1840s, the Illinois Supreme Court outlawed term slavery as well as other legalized forms of bondage.3 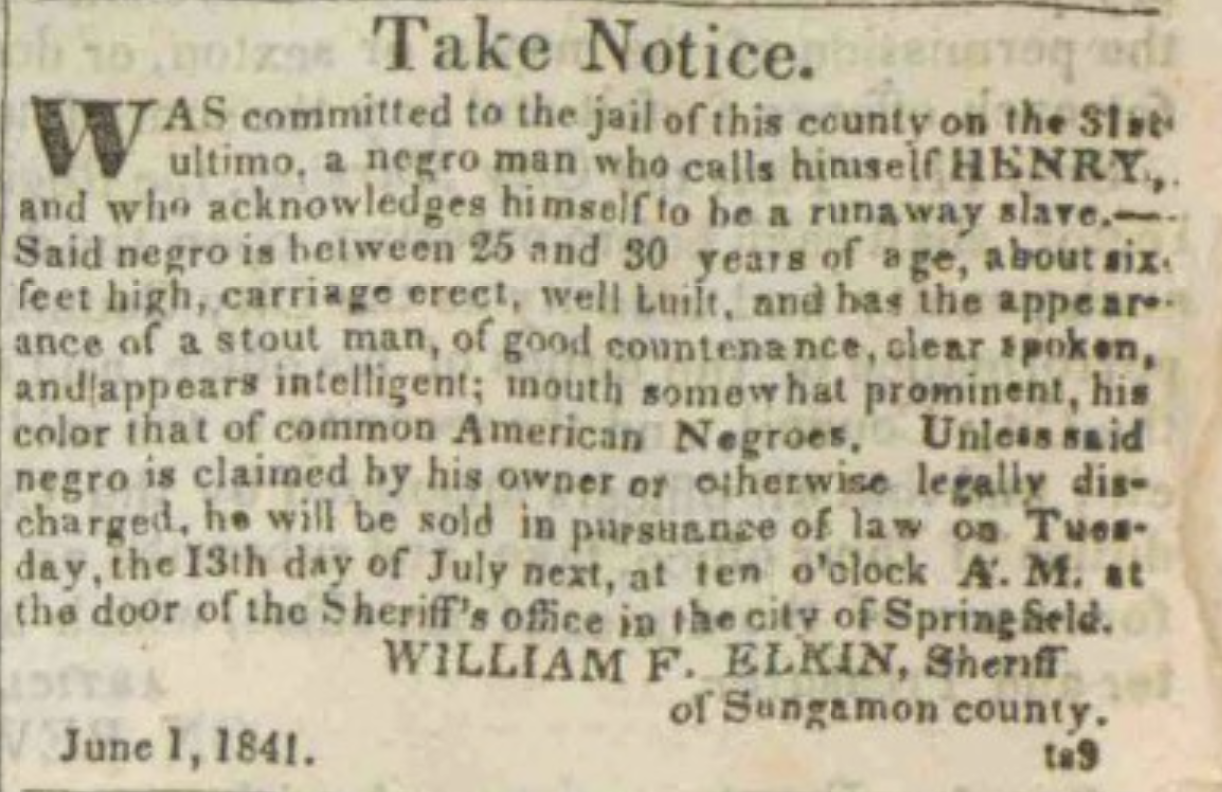 Notice of a “Runaway Slave,” Sangamon Journal, June 4, 1841.
This notice, published in the Sangamon Journal newspaper, informed readers that a Black man named Henry had escaped from slavery and was being held as a “runaway slave” in the county jail. In accordance with Illinois law, the sheriff informed readers that if Henry’s “owner” did not claim him and he wasn’t otherwise “legally discharged,” he would be “sold” in front of the sheriff’s office on July 13, 1841, at 10:00 A.M. (The Sangamon County sheriff, William F. Elkin, became prominent in Illinois politics and was eventually appointed to the U.S. Land Office by Abraham Lincoln in 1861.) (Source: Courtesy of Illinois Digital Newspaper Collections. University of Illinois Urbana-Champaign.)

But the end of slavery did not mean the beginning of racial equality. As early as 1819, the Illinois legislature enacted “black laws” designed to deny basic rights to free African Americans. The goal of these laws was to discourage Black people from migrating into the state.

Composed of twenty-five sections, the 1819 black law required Black Illinoisans to provide local officials with documentation showing that they were free and to register with local officials if they wanted to reside legally in a community. Black people who could not prove their free status could be arrested, “deemed a runaway slave,” and sold to labor without pay for up to one year. The law also  criminalized the assembly of three or more “slaves or servants of color,” and promised a fine for any person who hired an African American who had not officially registered.4

Written by Emiliano Aguilar; assistance with graphics and layout by Mikala Stokes. Edited by Kate Masur.