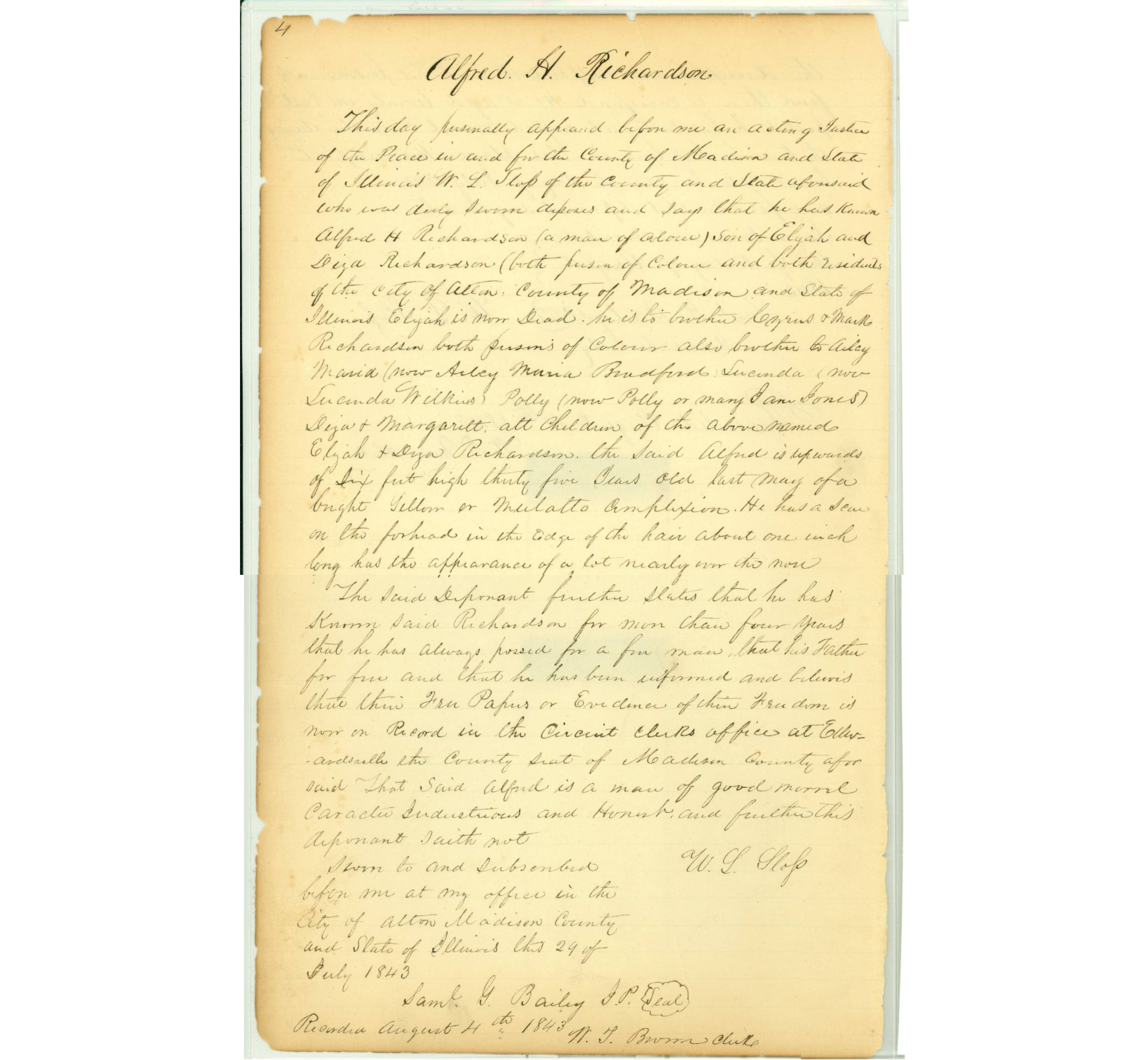 “I have asked God to forgive me, for I did not know any better then, and I promised that I would never vote a Democratic ticket again.”

Alfred Richardson was born free in Somerville, Tennessee, in 1808. He later recalled that as a boy he had “receiv[ed] a liberal education” and then learned the blacksmithing trade from his father. In 1831 Alfred married Phebe Bryant near Nashville. Phebe was also from Tennessee and was born in 1819. Phebe and Alfred eventually had eight children together.1

When Richardson was a young man, the state of Tennessee permitted all free men to vote, and in 1832 he voted for Andrew Jackson’s reelection to the presidency. Reflecting on that choice, he later quipped: “I have asked God to forgive me, for I did not know any better then, and I promised that I would never vote a Democratic ticket again.”

In 1835 Tennessee changed course and barred Black men from voting. At that point, Alfred’s father decided to leave the state. Two years later, the extended family moved to Alton, Illinois.2

Almost immediately, a racist incident in a white-led Baptist church prompted Richardson to organize an independent Black Baptist church in the neighboring community of Upper Alton. Two years later, he helped organize the “Colored Baptist Association and Friends to Humanity of Illinois,” an association of three Black churches that associated itself with white Baptists who opposed slavery and called themselves “Friends to Humanity.” The group of Black churches that Richardson helped found eventually became the Wood River Colored Baptist Association.3 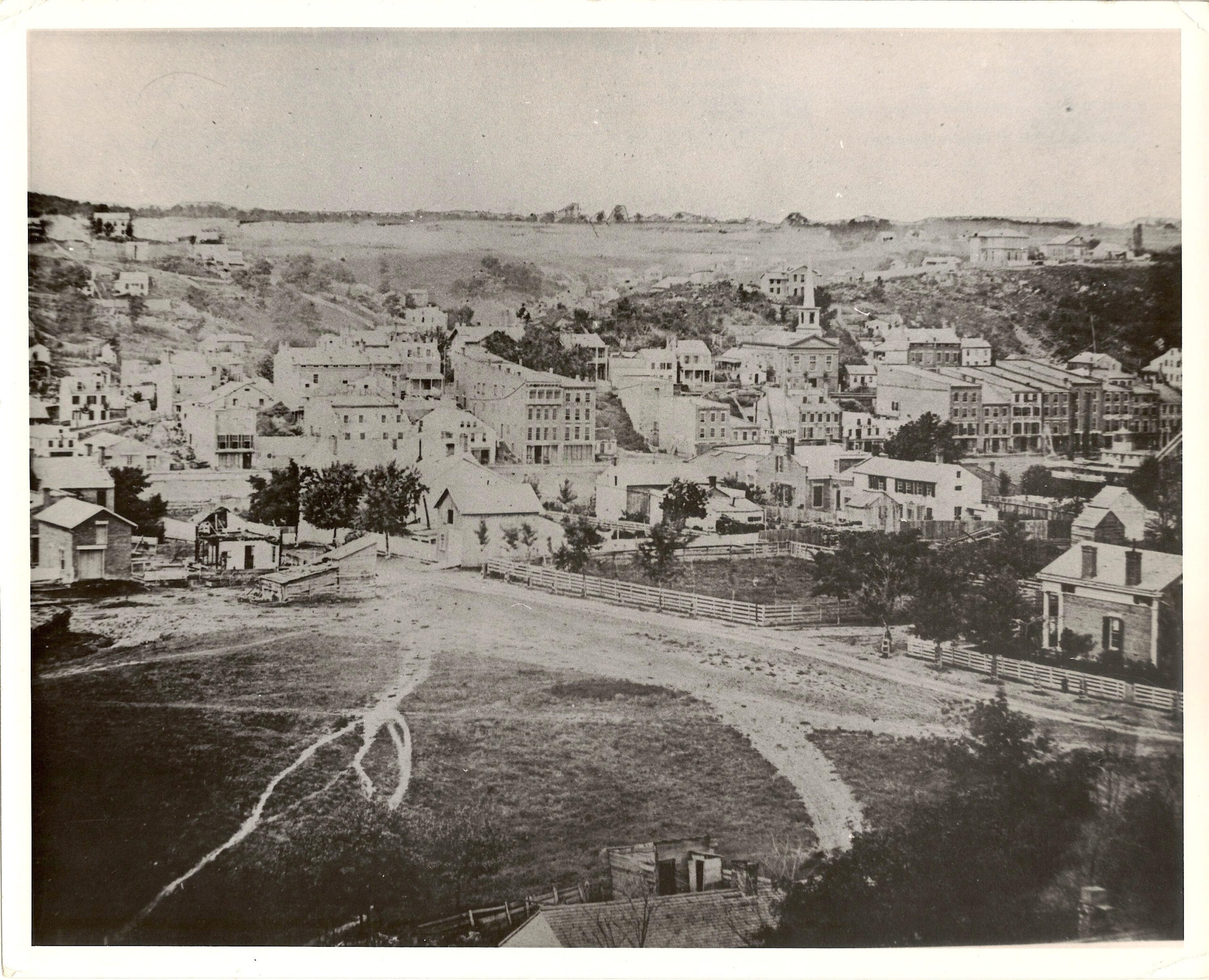 In 1843 Richardson registered his free status with county officials in Alton, and a witness, A. L. Slop, attested that he was “a man of good morrel caracter [sic], Industrious and Honest.” Richardson also became known as a conductor on the Underground Railroad in Alton.4

Around the same time, Alfred and his family moved to Galena, in far northwestern Illinois. Galena was a river town where a blacksmith could do a good business, and Alfred sought patronage from steamboat owners, mill proprietors, and merchants in town. He affiliated with a Baptist Church, and was later credited with starting a school for Black children.5 Likely spurred by the rising tide of Black protest, in the spring of 1853, Richardson placed an advertisement in a local newspaper that, in addition to touting his blacksmith business, noted that he had “sufficient capital to meet the demands of his business,” despite paying “taxes for the support of Free Schools, from the benefits of which he is cut off.” 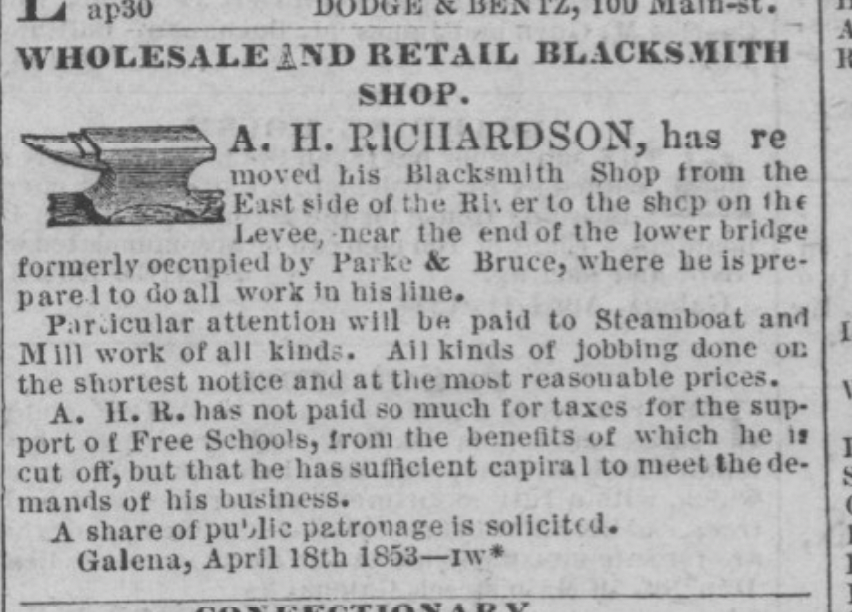 Advertisement for Alfred H. Richardson’s Blacksmith Shop
This advertisement mentions that the location of Richardson’s shop had changed and ends the article with a dig about the exclusion of Black residents from the benefits of “Free Schools.” (Source: The Daily Evening Jeffersonian, May 12, 1853. Courtesy of Illinois Digital Newspaper Collections. University of Illinois Urbana-Champaign.)

In September 1853, a meeting in Galena’s A.M.E. Church delegated Richardson and A.M.E. minister Richard H. Cain, to represent Jo Davies county at the statewide colored convention in Chicago. At the convention, Richardson chaired the committee on mechanics.6

At home in Galena, Richardson associated with Moses Dickson, a militant organizer against slavery. Dickson, who was originally from Cincinnati, worked on steamboats on the Mississippi River. Radicalized by witnessing the cruelties of slavery, in the 1840s, Dickson organized with other Black men to promote a slave rebellion across the southern states. He called his secret group of rebels the Knights of Liberty.7

In 1855 Alfred hosted Dickson, Cain, and others in his home for a meeting that created the Order of Twelve, of Knights of Tabor, a secret society that honored the Knights of Liberty but, Dickson later wrote, did not share its revolutionary goals.8

Census records suggest that Alfred’s wife, Phebe, passed away in the 1870s. His children now grown, Alfred spent time in both Kansas and Chicago. In the mid-1870s he was living in Chicago and helping to collect money for a Black college in his home state of Tennessee. In the early 1880s, he was with his brother, Mark Richardson, in Sedgewick, Kansas, where both men worked as blacksmiths. By 1900, Alfred was back in Chicago, where he lived with his eldest daughter, Medora. Medora had married Pennsylvania-born Charles A. Brown, who worked as a railroad porter to maintain their small household.

Richardson died in Chicago in October 1900. He was ninety-two years old. His obituary noted that he had first moved to the city in 1837 and had been “the first person of his race to make his home here.”9