Women at the Colored Conventions

Attending and participating in colored conventions was very likely another way that African American women tried to experience full citizenship in antebellum America. Yet, the official record of the conventions’ proceedings (especially for those covered in this exhibit) do not provide sufficient evidence of these women contributing to the debates even as members of the general assembly. Looking carefully through archives of nineteenth-century African American newspapers and other historical materials does allow you to gain a deeper understanding about women in the colored conventions movement. Though they usually were not appointed to serve as delegates, some African American women held different roles on committees, performed as entertainers (during brief intermissions), reported on the conventions as journalists, and even ran boarding houses for those attending the conventions. Frederick Douglass casts such a broad shadow over most others involved in the colored conventions movement considering his now iconic status as an activist-intellectual. Yet, we profile the following African American women in this exhibit to bring due attention to their activism, considering how they may have influenced Douglass and perhaps many other black leaders in the struggle for abolition, equality, and social justice.

The motto on The North Star’s master head announces Frederick Douglass’ advocacy of gender and racial equality: “Right is of No Sex, Truth is of No Color, God is the Father of Us All–And All We are Brethren.” 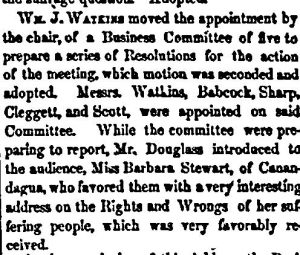 Excerpt of a report about Barbara Stewart at a “Meeting of Colored Citizens in Rochester.” Frederick Douglass’ Paper for September 21, 1855. 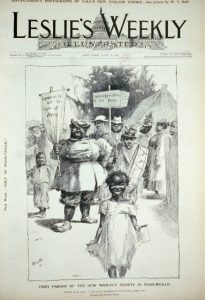 Black Women in the Public, Politics, and Minstrel Print Culture

Often when African American women did participate in political movements, they would be ridiculed for breaking social norms of “respectability,” or middle class decorum during the nineteenth century. Activist women were viewed as deviants who neglected their domestic responsibilities by entering the public domain of masculinity. African American women especially were targeted as public speakers in the abolitionist movement.  Minstrel depictions of black people was a popular form of entertainment in American theatre by 1830s. Often, white actors in “black face” would perform as African Americans singing, dancing, and speaking in dialect as buffoons. Newspapers would also publish political cartoons with images of blacks in comical situations to mock their activism and social conditions. By the 1850s, with the splintering of women’s right from the colored conventions movement, “parodies of African American womanhood abound. They were portrayed as ‘unsexed,’ or beyond the bounds of respectability” (Jones 99). As it appears in an 1897 cartoon from Frank Leslie’s Illustrated Newspaper, for example, this trend would continue throughout the nineteenth century as more African American women continued to fight for racial and gender equality.