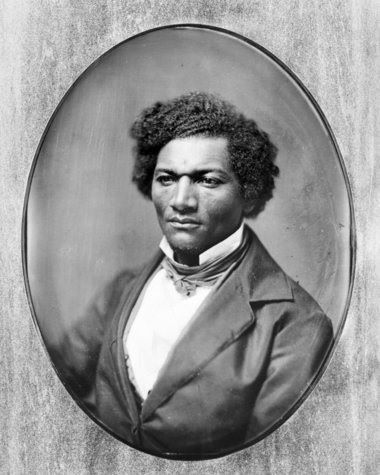 The Becoming Frederick Douglass exhibit concentrates on the initial stages of his career as a public intellectual and his leadership during the Colored Conventions movement in the antebellum era. It will allow you to witness Douglass’ transformation from a fugitive slave to a free man, abolitionist orator and activist, from around 1841 to 1855. This period is foundational to the launch of his decades-long career, beginning a few years before the publication of the Narrative of the Life of Frederick Douglass (1845), which made him famous, to the publication of his second autobiography, My Bondage and My Freedom (1855), which, by this time, confirms his status of being the leading African American public intellectual and civil rights activist of the nineteenth century.

To examine his pivotal role in the Colored Conventions movement, the exhibit features five key components:

Just how Douglass constructed his public image with his activism in the abolitionist movement is well-documented. However, with the Becoming Frederick Douglass exhibit, it is possible to discover the ways Douglass entered the public sphere as a novice among other Black leaders over a decade after the conventions movement began in the 1830s, and how he was transformed by its organizational methods and membership. Archival materials used in this exhibit further highlight Douglass’ public life in American print culture.

Douglass at the Colored Conventions

Considering his role in regional politics and organizations of the Northeast (esp. in Massachusetts and New York), the Becoming Frederick Douglass exhibit focuses on his activities during the conventions movement in this area primarily:

This listing tracks Douglass from his arrival North as a fugitive slave, his first appearances at the conventions, and his ascendency to leadership in an early civil rights movement.

While tracking Douglass at the colored conventions, this exhibit highlights the frameworks of power and control in antebellum society. It places Douglass in context of social reform at the grassroots among free African Americans to understand the efficiency of such organizational methods and the effects of such tactics on a young Douglass. The planning for conventions would begin weeks prior. Community leaders would issue calls for public meetings held in local churches and lecture halls. The assembly would then appoint convention officials as well as delegates to represent different cities at state and national conventions. Often, Douglass would appear in the convention’s roster, as an officer or a delegate, serving on ad hoc committees and/or delivering speeches, fully participating in the democratic process of representation and agitation.

Though the primary organizers were African American males, the congregations were often more diverse than which is indicated by the convention titles. So, for example, by indicating “colored citizens,” “colored people,” and “free people of color” as the target audience, most likely these gatherings included Black women and attracted even fugitive slaves like Frederick Douglass. Other conventions announce a gathering of “friends” which may indicate White attendants (even foreigners) at the predominately Black conventions. A more distinct image of the diversity within the colored conventions movement appears in the details of the proceedings. In particular, this exhibit draws attention to the glaring omissions in conventions’ minutes about Black women who worked alongside the men to agitate for freedom, justice, and racial equality. They were not allowed to be delegates and/or women’s rights was dismissed as a political problem by the all-male delegations. However, using evidence of Black women’s influence and participation in the conventions as recorded in the publicity about the conventions and other historical documents, this exhibit makes Black women less “politically invisible” as activist-partners (Jones 92).
Also, it is important to align Douglass’ early abolitionist activities with his participation at local and state conventions in the Northeast. This exhibit therefore integrates his participation in different public spheres that were either predominately Black or White by highlighting important individuals with whom he formed alliances, including the following:

Essential to his success while escaping as a fugitive, during his exile, and upon his return to the states is the unwavering support of his first wife, Anna Murray Douglass. She managed the household finances, acted as a “conductor” on the Underground Railroad in their home in Rochester, New York, and was primary caregiver for their five children during Douglass’ extended absences: Rosetta Douglass (1839-1906) Lewis Henry Douglass (1840-1908) Charles Remond Douglass (1844-1920), Frederick Douglass, Jr. (b. 1842-1892), and Annie Douglass (1849-1860). That she traveled with her husband on that first trip to Nantucket is significant since it does not appear that Anna would ever attend any of his other major speaking engagements. But, as we see with other black activists couples, the Douglass’ bond remained unbreakable given their commitment to the abolition of slavery and the fight for equal rights as citizens of the United States of America.

Most of the archival images of Frederick Douglass featured in this exhibit are archived in The Frederick Douglass Papers (digital edition) under the stewardship of John R. McKivigan (editor) at Indiana University-Purdue University in Indianapolis (IUPUI). The collection is a unit of that campus’ Institute for American Thought. Also, John Stauffer, Zoe Trodd, and Celeste-Marie Bernier’s Picturing Frederick Douglass: An Illustrated Biography of Nineteenth Century’s Most Photographed American (2015) feature over sixty images. For this exhibit, the       (re)discovery of rare daguerreotypes and other archival images creates a photographic narrative of the early life of Frederick Douglass. As much as possible, the exhibit also features images of other individuals within Douglass’ circle of activist allies. Altogether, as a multimedia production, this exhibit includes different archival materials—written texts, visual artifacts, and other historical documents—which are useful to understand Frederick Douglass at a unique moment in his life.