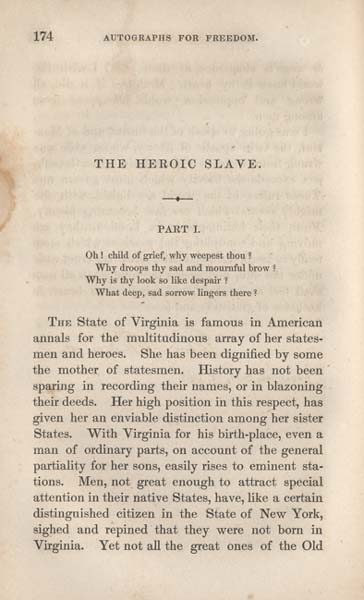 Frederick Douglass wrote and published one work of fiction during his life, his 1853 The Heroic Slave. The novella loosely follows the events of a slave revolt in 1841, on the slave ship Creole, and the actions of Madison Washington. This revolt has been discussed many times throughout history, and was even mentioned by Henry Highland Garnet at the 1843 National Convention of Colored Citizens in Buffalo.

The Heroic Slave novella was not the first time that Douglass has spoken about the events of the Creole and of Madison Washington. There is documentation that shows how Douglass changes the way that he talks about Washington over the years. Early on, noticeably during the time that he was associated with Garrison, Douglass presented Washington as a family man and a heroic figure. It is interesting to note that a lot of the literature surrounding Madison Washington goes to great lengths to make him more approachable and more acceptable to white audiences. In some instances, the literature has made note that Madison Washington was made into the figure that he was so that he could serve as a counterpoint to Nat Turner and the slave revolt that he led.  Douglass helps to move this narrative along for a while before his breakaway from Garrison at which point he began to discuss Washington as a more radical figure, while maintaining his image as a family man, which was evident when The Heroic Slave was made available to the public.

To further the circulation of The Heroic Slave, it was published in Autographs of Freedom, a gift book edited by Julia Griffiths. Griffiths conceived of the gift book as a fundraising effort, and produced it alongside the Rochester Ladies’ Anti-Slavery Society (RLASS) (Fee 16). Proceeds of the sales would be used for the abolition of slavery. Additional short stories and essays were contributed by other notable abolitionists, including Harriet Beecher Stowe. Autographs was sold at Douglass’s newspaper office and throughout Rochester, NY and Philadelphia, as well as in the United Kingdom, in bookstores and in other locations in 1853 and 1854 (Fee 16). 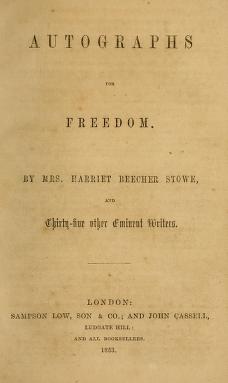