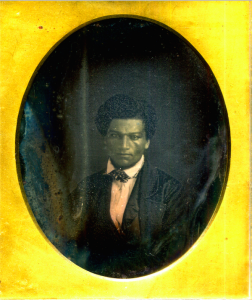 “The motto which I adopted when I started from slavery was this—’Trust no man!’ I saw in every white man an enemy, and in almost every colored man cause for distrust. It was a most painful situation; and, to understand it, one must needs experience it, or imagine himself in similar circumstances. Let him be a fugitive slave in a strange land—a land given up to be the hunting-ground for slaveholders…”

—The Narrative of the Life of Frederick Douglass (1845)

After escaping slavery from a plantation in Maryland, the fugitive known as “Frederick Bailey” / “Stanley” fled to the North in 1838. Eventually he would settle in New Bedford, Massachusetts as “Frederick Johnson,” along with his wife Anna Murray. Here, the two began their new lives in freedom, starting a family and his abolitionist career as “Frederick Douglass.”

Douglass did not attend the 1841 convention in Portland, Maine though he was traveling throughout the region on the abolitionist lecture circuit. Therefore, the “Douglass the Fugitive” section of the exhibit begins tracking his movements within the Northeast as a relatively unknown activist-orator on the road to becoming a Black leader in the nineteenth century movement for justice and equality.