From Fugitive to Free Man: Douglass Returns to the U.S. 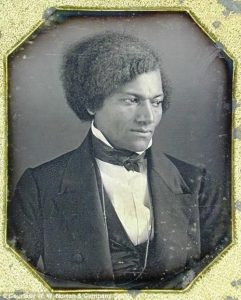 “You may perhaps want to know how I like my present condition. I am free to say, I greatly prefer it to that which I occupied in Maryland. I am, however, by no means prejudiced against the State as such. Its geography, climate, fertility and products, are such as to make it a very desirable abode for any man; and but for the existence of slavery there, it is not impossible that I might again take up my abode in that State. It is not that I love Maryland less, but freedom more.”

After the publication of The Narrative of the Life of Frederick Douglass, An American Slave in 1845, Douglass fled to Great Britain to prevent recapture giving his notoriety as a fugitive slave author. He traveled to Scotland, Ireland, and throughout England for almost two years delivering anti-slavery lectures. He returned to the U.S. in the spring 1847 only after his foreign allies purchased his freedom. He established his first newspaper, The North Star, immediately upon his return, and, in it, on the tenth anniversary of his escape from slavery, Douglass published the letter to his former master, Thomas Auld.This exhibit does not cover Douglass’ exile period. In this section, however, you will be re-introduced to “Frederick Douglass” as a celebrated activist after his international tour. Witness his transformation from a Garrisonian protégé to a more “glamorous” and charismatic leader in the Colored Conventions Movement.