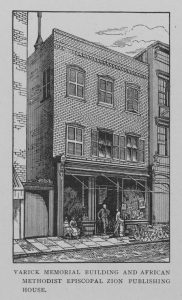 From the pulpit, many African American clergyman have been leaders also in activist organizations. This tradition began in the antebellum period with mostly male ministers during the Colored Conventions movement. Whether serving as officers or delegates, these men stood firm on addressing political issues affecting African Americans, free and enslaved, in local communities and in the nation at large. In fact, many black churches splintered from majority white churches especially to advocate for the abolition of slavery in the U.S. (Quarles 81). The African Methodist Episcopal (A.M.E.) church, most notably, traces its origins to 1816 when black members left the white Methodist Episcopal denomination citing cases of racial prejudice. Too often the criticism of segregated seating and services in white churches was reason enough for African Americans to organize on the basis of autonomy and equality. The breakup of other major denominations—Presbyterians and Baptists—is also traceable to politics in the black pulpits. 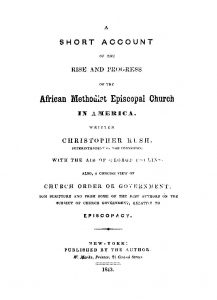 Early recordings about the split from white churches to create black Episcopal factions found in Christopher Rush’s A Short Account of the Rise and Progress of the African Methodist Episcopal Church in America (New York, 1843).

Even Frederick Douglass was radicalized by his affiliations with black ministers. From his days in slavery, he remembers the teachings of Charles Lawson as his spiritual mentor (Blight 53-54). While enslaved in Baltimore, Douglass, then named Frederick Bailey, recounts that he “cop[ied] from the bible and the Methodist hymn book, and other books which had accumulated on my hands, till late at night, and when all the [white Auld] family were in bed and asleep. I was supported in my endeavors by renewed advice, and by holy promises from the good Father Lawson, with whom I continued to meet, and pray, and read the scriptures” (My Bondage, My Freedom 93-94). Mere months after escaping from slavery, Douglass joined the Zion Methodists, a “small body of colored Methodists” at their church in New Bedford, Massachusetts (Andrews 596). Douglass had witnessed and experienced racism from the segregated pews when he considered joining initially the mostly white Elm Street Methodist church. Then he found the African Methodist Episcopal Zion (A.M.E.Z.) Church a more suitable base for launching his “ ‘new vocation’” as a preacher and abolitionist orator (Blight 92-93).

This incubation period would allow Douglass to hone his performance skills and encourage his participation in the democratic processes of black organizing. At his beloved “Little Zion,” Douglass was mentored by the Reverend Thomas James, who also licensed him to preach (Blight 93). By 1839-40, Douglas first began participating in local meetings to oppose African colonization campaigns to expatriate African Americans. That he witnessed other black activist-ministers like Henry Highland Garnet delivering an abolitionist address from the pulpit on May 30, 1841 also left an indelible imprint on Frederick Douglass. (Blight 97-97). This was likely the first encounter between the two men before becoming ideological rivals at the 1843 convention in Buffalo.

At the convention, both Douglass and Garnett had similar views though about the “Christian church” as it existed in slavery, but they disagreed with other delegates about “what constituted the true church. They all agreed that the existing church in this country was corrupt–was wedded strongly to slavery, and was a pro-slavery church” (Convention Minutes, p.11). Douglass had witnessed the hypocrisy of white Christians while enslaved in the Maryland, and it would serve him well as evidence of the immorality of slavery. In one of his earliest sermons, Douglass once proclaimed with certainty, “what a mockery of His religion is preached at the South!”

Frederick Douglass undoubtedly felt akin to the leadership of the A.M.E.Z. Church as some of its most prominent ministers advocated for abolition and racial equality. Jehiel C. Beman (1789-1858), the father of Amos G. Beman, lead several congregations in Connecticut and Massachusetts during the antebellum era. “As a representative of the race-conscious A.M.E. Zion faith, [Jehiel C.] Beman advocated that people of African descent maintain their identity and their ancient culture and history for posterity” (James 140). His activism began as early as 1831 when he was among a small group of black clergy to oppose the predominately white American Colonization Society schemes to repatriate free people of color. The elder Beman was also likely a contributing editor to short-lived Freedom’s Journal (1827-1828), the first African American newspaper that served as an outlet for abolitionism and advocacy for the rights of free blacks in the North. From the pulpit at his Cross Street A.M.E. Zion Church in Middletown, Connecticut, Jehiel C. Beman advocated religious and social reform. This location also served as a “station” of the Underground Railroad, aiding fugitive slaves like many other black churches at the time. As an activist-minister, Jehiel Beman served as a representative delegate at conventions on all levels until around 1854, advocating educational reform and voting rights in particular. Like his father, Amos Gerry Beman led his Temple Street African Church in New Haven, Connecticut for many years and served as a delegate and officer throughout the Colored Conventions movement (James 138).