Elected president of the 1850 Fugitive Slave Law Convention in Cazenovia, New York, Frederick Douglass confronted the passage of the Fugitive Slave Bill into law earlier that year. Likewise, he oversaw a convention unique for its recognition of diversity. The Sunbury American, a Pennsylvania newspaper, reported that the convention hosted 1,500 fugitive slaves. Interracial representatives like Gerrit Smith and female activists like Theodosia Gilbert and the Edmonson Sisters also played prominent roles. The 1850 Convention was representative of a diverse range of abolitionists and placed Douglass within a large circle of his peers and exemplified his emergence as a radical abolitionist. Douglass and other delegates at the Cazenovia Convention debated a strategy for disputing the Fugitive Slave Law of 1850, utilizing the recent imprisonment of William L. Chaplin to their advantage.

Douglass at the Convention

Convening at 10 a.m. at the Free Church of Cazenovia on August 21st, the Convention was called to order by James C. Jackson and committees were formed to handle the business of the meeting. The convention aimed to assist William L. Chaplin, a prominent abolitionist who had been jailed for attempting to assist two runaway slaves. An all-female committee was established to raise money for a medal to be given to Chaplin, and Chaplin’s fiance, Theodosia Gilbert, was also in attendance. Joseph C. Hathaway, a white abolitionist and member of the Society of Friends, gave an account of his and Gilbert’s recent visit with Chaplin in prison. The Convention produced considerable outcomes, as the committees decided to raise money for Chaplin’s bail and to agitate the establishment for the immediate emancipation of all slaves.

The Cazenovia Convention directly responded to the passage of the Fugitive Slave Law of 1850, a component of the Compromise of 1850 that required the cooperation of citizens in free states in capturing and returning runaway slaves. Officials who did not detain runaways were subjected to fines of $1,000, and those who aided fugitives could even face imprisonment. The Cazenovia Convention, which was attended by some two thousand representatives and a large number of fugitive slaves, attacked the Fugitive Slave Law through the publication of two letters. These letters identify Douglass and the delegates as radical abolitionists, and for the second day of the Convention the Free Church would not allow their presence. Rather, the group met in an apple orchard that belonged to Grace Wilson. 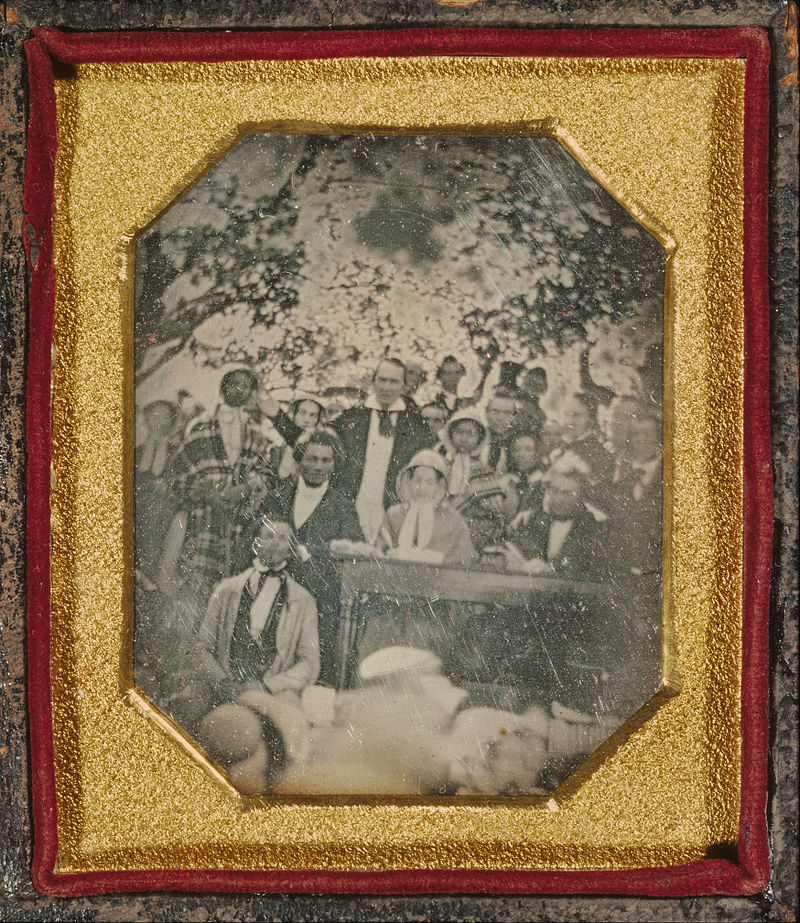 Ezra Greenleaf Weld’s daguerreotype shows a unique portrait of the diversity of the Cazenovia Convention. Douglass is seated (at the table in the center) beside Theodosia Gilbert—the fiancé of William L. Chaplin—and Joseph Hathaway. Thus, a white activist, a female, and an African American are literally positioned side-by-side. Douglass’ ability to be elected president of an interracial group is telling of his influence. The setting itself–in an apple orchard–accentuates the amount of people in attendance, as no indoor facility could house roughly two thousand fugitive slaves and delegates at the time (nor perhaps would it have been allowed given the general public’s aversion). The daguerreotype also dispels negative depictions of the convention that do not properly express African Americans’ political involvement in national affairs at the time.

Below are more detailed accounts of some of the delegates at the Cazenovia Convention. Those in attendance included, but are not limited to the following: 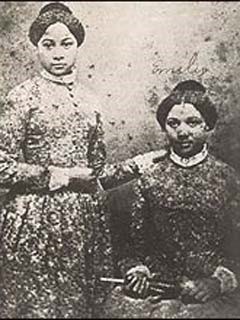 Mary and Emily Edmonson, commonly referred to as “the Edmonson sisters,” were born in 1832 and 1835, respectively. The two African American women were raised in slavery, and their story is documented in Harriet Beecher Stowe’s A Key to Uncle Tom’s Cabin (1853). Along with their brothers, Mary and Emily participated in the failed escape attempt aboard The Pearl, a schooner in Washington D. C. from which seventy-seven slaves sought to flee to New Jersey. Notably, this attempt was led in part by William L. Chaplin and Gerrit Smith. Following this effort, the sisters and four of their siblings were shipped to the slave markets of New Orleans, and Mary and Emily were subjected to particular abuse as light-skinned women who, even as teenagers, were valued for their sexuality. Through the efforts of William L. Chaplin and Henry Ward Beecher, the sisters were freed from slavery in 1848 with funds raised by the Congregational Church in New York. Following their emancipation, they attended school, worked, and campaigned throughout the North for the abolitionist cause.  According to the 1850 meeting minutes, the sisters even “favored the Convention with occasional songs,” and local tradition indicates that they sang “I Hear The Voice of Lovejoy on Alton’s Bloody Plain” in honor of Elijah Lovejoy, an abolitionist killed by a pro-slavery mob in 1837. The Edmonson sisters first met Frederick Douglass at the 1850 Cazenovia Convention and continued communicating throughout their respective abolitionist careers, coming into contact at several events. 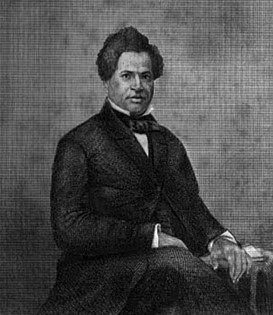 Rev. Jermain Welsey Loguen (1813-1872), unknown artist, engraved frontispiece portrait from his autobiography The Rev. J. W. Loguen, as a Slave and as a Freeman (Syracuse, NY, 1859).

Born to a white father and an enslaved mother in Davidson County, Tennessee, Jermain Wesley Loguen (1813-1872) escaped to Canada in 1834 and later trained in the Jeremiad sermonic tradition in Rochester, New York. He became a school teacher, an African Methodist Episcopal Zion Church preacher, and an active agent for the Underground Railroad. Loguen played a large role at the Cazenovia Convention, acting as a nominating officer as well as reporting the two addresses made by the fugitive slaves. Not only was he acquainted with Frederick Douglass as a colleague at the 1850 Fugitive Slave Convention, but they also worked together on lecture circuits. He and his wife Caroline Storum had six children and their eldest daughter later married Lewis Henry Douglass, the eldest son of Frederick Douglass. There are numerous parallels between Loguen and Douglass’ activist careers (abolition, women’s rights, oratory performance, and Christianity) and the two remained close friends for many years. Rev. Loguen’s connection with Douglass highlights the relationship-driven encounters that occurred at Colored Conventions. Douglass frequently promoted Loguen’s speeches in the Frederick Douglass’ Paper.

Gerrit Smith and the Radical Abolitionists

Gerrit Smith (1797-1874) was a wealthy white abolitionist, politician and social reformer from Peterboro, New York. Douglass and Smith were close friends following Douglass’ split from William Lloyd Garrison, as Smith exerted a profound influence upon Douglass by the 1850s both in terms of his radical abolitionist rhetoric and organization of abolitionist conventions. In the extreme, Smith and like-minded others supported a violent revolution, if necessary, to bring forth full freedom for enslaved African Americans. Smith often used his wealth to aid escaping fugitives and he also backed John Brown’s insurrectionary plans.  Not only did Smith help organize the Cazenovia Convention, but he played an important role as the chairman of the Business Committee. Some newspapers, which can be viewed in the next section of this exhibit, highlight Smith’s importance as a white abolitionist while downsizing Douglass’ role as president of the convention. 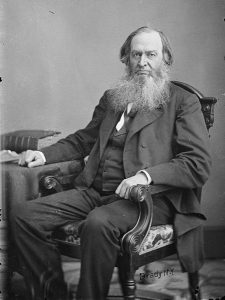 *To read the minutes of the 1850 Fugitive Slave Law Convention, visit the Colored Convention’s archive at https://omeka.coloredconventions.org/items/show/234