Hypocrisy of the Christian Church 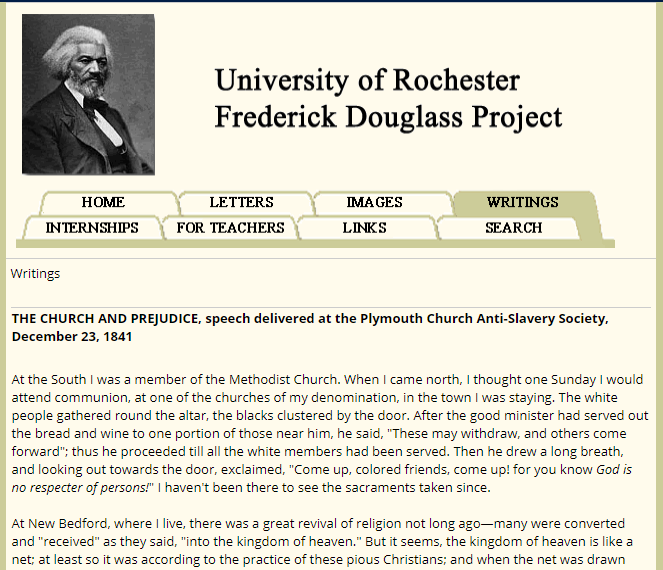 Douglass delivered “The Church and Prejudice” in December 1841, “The Southern Style of Preaching to the Slaves” in January 1842, and “The Slave’s Only Earthly Hope” in May 1843. Each of these three speeches reflects the ways Douglass believed that white Christianity was used largely to reinforce slavery. Additionally, these speeches provide a sampling of the evolution of Douglass’s speaking voice, public persona, and thoughts on Christianity as he prepared to attend the August 1843 colored convention. Douglass was a much more performative orator than his first mentor, Garrison, while he would eventually oppose the more physical force his later partner Garrett infused into his personal style of oratory.

At a Massachusetts Anti-Slavery meeting in Boston in January 1842, Douglass delivered “The Southern Style of Preaching to the Slaves.” His speech punctuated by numerous emphatic responses from his audience as Douglass parodies slaveholders’ sermonic styles. Douglass describes himself as a slave, according to the Constitution, or at least the laws of the South. He describes his scarred back from the lash of slavery. Douglass uses hyperbolic language to hammer home his point. He does not believe himself to be a slave, nor do his audience members see themselves as slaves. Douglass’s words, and his humbling himself, thanking his audience for “permitt[ing]” him to speak draws attention to the notion that black men and women are seen as lesser than their white counterparts. 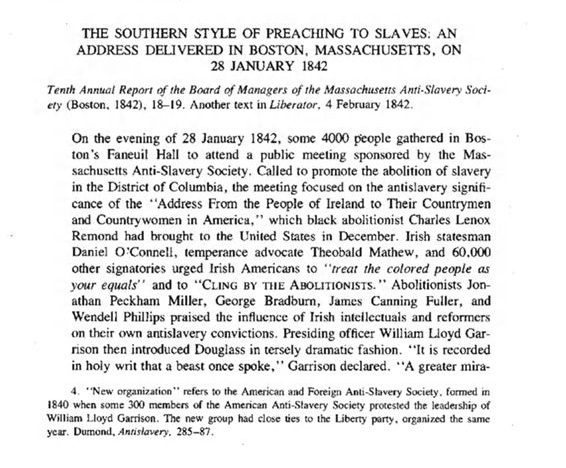 Douglass specifically addresses the hypocrisy inherent in Southern styles of preaching, and how this form of Christianity denies black men and women the privileges espoused by Christianity’s tenets. Douglass declares “what a mockery of His religion is preached at the South!” where slaves are segregated from white Christians, barred from partaking in the same Christian privileges. In this speech, Douglass performs for his audience throughout, mimicking the motions and tone of the preachers he scorns. Indeed, Douglass’s quoting of Southern white preachers’ use of the gospel to compel slaves to “labor diligently” and “be obedient unto [their] masters” causes his audience to erupt into applause and laughter.  Douglass closes his indictment of the southern style of preaching by declaring that the gospel “more than chains, or whips, or thumb-screws, gives perpetuity to this horrible system” of slavery. 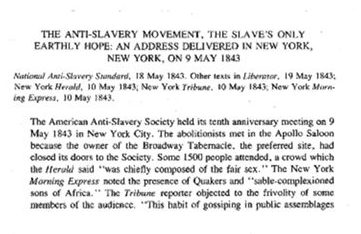 Douglass delivered “The Slave’s Only Earthly Hope” at the American Anti-Slavery Society tenth anniversary meeting in New York, NY on May 9, 1843 just a few months before he attended the August 1843 Colored Convention. His speech opened with the words, “I have myself been a slave, and I do not expect to awaken such an interest in the minds of this intelligent assembly, as those have done who spoke before me. For I have never had the advantage of a single day’s schooling, in all my life; and such have been my habits of life, as to instil into my heart a disposition I never can quite shake off, to cower before white men.”

In this address, Douglass uses rueful language, apologizing for his lack of education. He also addresses his audience via the formal and respectful “sir” multiple times throughout. In addition to his lack of education, Douglass acknowledges his status as a former slave. He recognizes that he is still a former slave in the face of the other delegates, and while he highlights how he would use his experiences and knowledge for the eventual liberation of African Americans, he denotes that he believes this position gives him less power to persuade others. Douglass’s respectful and humble tone here is markedly different than the voice he utilizes in later speeches, after he becomes published and gains recognition.

Acknowledgements: “Hypocrisy of the Christian Church” page written by Kayla Schreiber, PhD student in English at The University of Southern Mississippi