At the 1850 Cazenovia convention, the delegates endorsed two letters to demonstrate their radical beliefs and motives for organizing. An address to Northern abolitionists recommended that William L. Chaplin be nominated for president of the United States as a candidate of the Liberty Party. The letter references a later convention to be held at Oswego, New York where the formal nomination would occur.

The much more renowned “A Letter to the American Slaves from those who have fled from American Slavery” is written from the perspective of the fugitive slaves who attended the convention. Gerrit Smith–a white abolitionist and friend of Douglass who headed the business committee–played a large role in writing the seventeen resolutions that appear at the end of the letter. The language of the letter is emotionally charged, and Douglass–the former fugitive slave who presided over the convention–represents this passion. When the delegates expressed that fugitive slaves had many friends in free areas, Douglass objected, saying that “no one was a friend of the fugitive slave who would not take him into his carriage and help him on his course, as Chaplin did” (“Another Movement,” August 26, 1850). 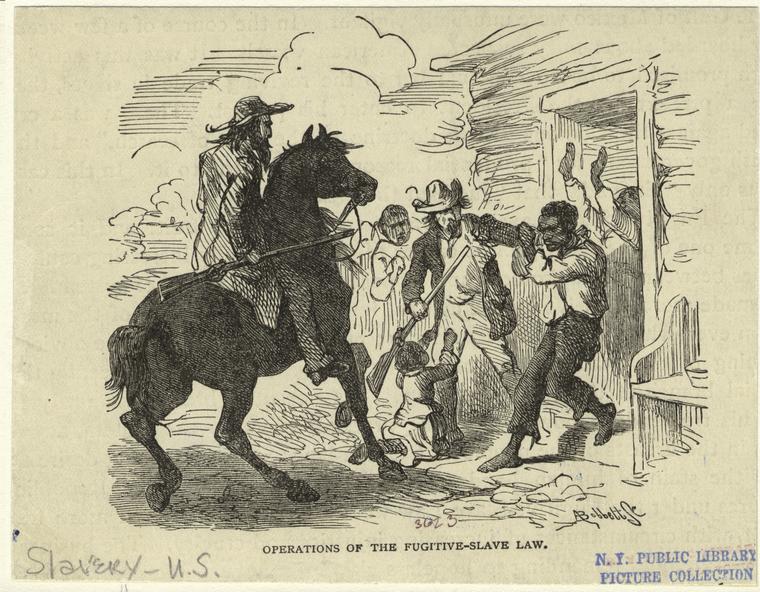 The “Letter to the American Slaves” incites “the rules of war” against slaveholders, maintaining that slaves “have the fullest liberty to plunder, burn, and kill, as you may have occasion to do to promote your escape.” Support of slave revolts was controversial enough to gain national attention, and many newspapers highlight the meeting with negative terminology. The Brooklyn Daily Eagle indicates that “[t]he address adopted by these moral outlaws, denounces Christianity as a humbug, and inculcates the morality of civil war, and the assassination of slaveholders” (“South Carolina Outdone”). The seventeenth resolution of the convention is plain: “Chaplin’s release, or civil revolution!”

The convention’s violent methodologies and the hint of a civil war are prophetic, but they differ from Douglass’ earlier agenda. His split with the Garrisonian abolitionists was due to his desire for immediate emancipation. William Lloyd Garrison’s paper, in fact, published that “[w]e are ashamed to have occupied our readers or ourselves so much at length with these proceedings at Cazenovia,” in part because of the convention’s support of revolt (“The Cazenovia Convention”). The Cazenovia Convention demonstrates the growing tension between Douglass and Garrison, although in 1852 Douglass would support the Constitution as a “glorious liberty document” in his now famous speech, “What to the Slave is the Fourth of July?”. Perhaps the different tones between the 1850 and 1852 addresses are due to the audiences Douglass was addressing. At Cazenovia, the convention was comprised of fugitive and former slaves as well as white and black activists. In 1852, however, Douglass was speaking to a group of white abolitionists. Even so, the Cazenovia Convention distinguishes Douglass from Garrison through its support of slave revolts.

Media Archive: Response to the Scandal at Cazenovia

The Fugitive Slave Law Convention met with praise and criticism from a national audience, and newspaper records document the general public’s response to this historical meeting.

This paper recounts the first day of the Cazenovia Convention in great detail, as well includes an editorial. 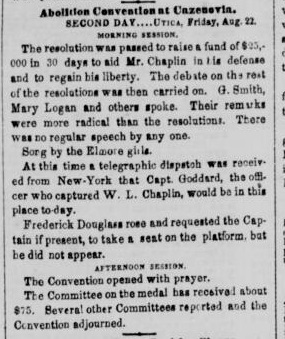 This newspaper summarizes the second day of the Cazenovia Convention, mentioning the Edmonson Sisters as well as noting that speakers included Mary Logan and Gerrit Smith. 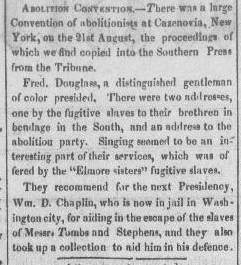 Notice how this paper shortens Douglass’s name to “Fred. Douglass,” as well as mentions the Edmonson sisters. 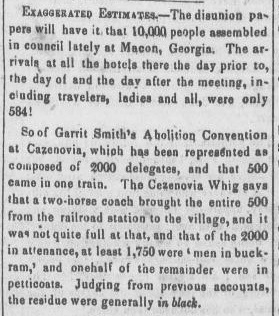 This Southern paper attacks the high estimates of attendance at the Cazenovia Convention. 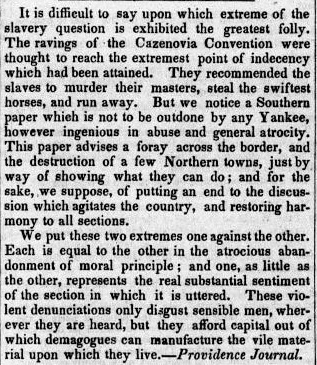 This article critiques the Cazenovia Convention’s views on slave revolts. 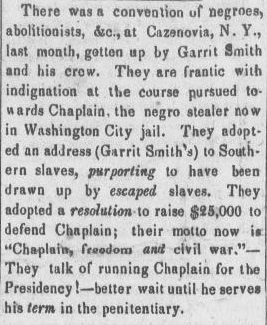 This Mississippi paper criticizes the notion that the addresses of the convention were written by fugitive slaves. 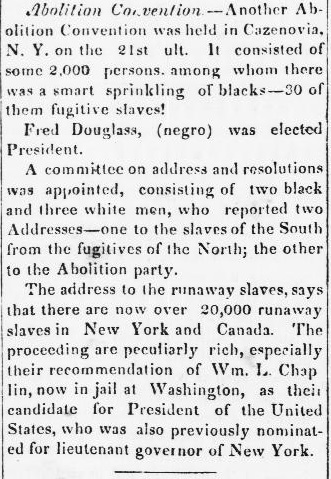 An article from a North Carolina newspaper deems the Convention “rich.” 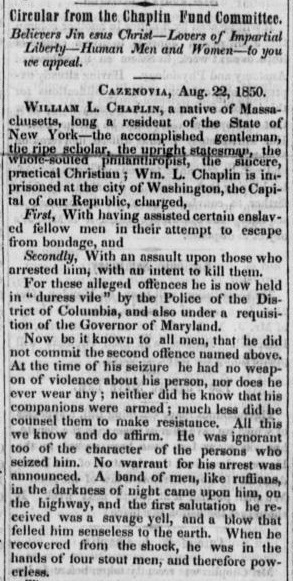 The Convention released a circular that attempted to raise money for William L. Chaplin. 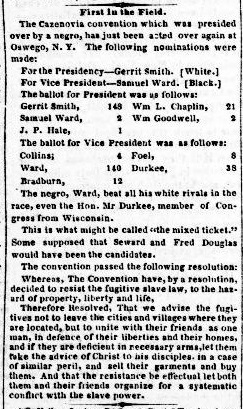 This report of a convention in Oswego, New York references the meeting at Cazenovia along with Frederick Douglass’s role there. 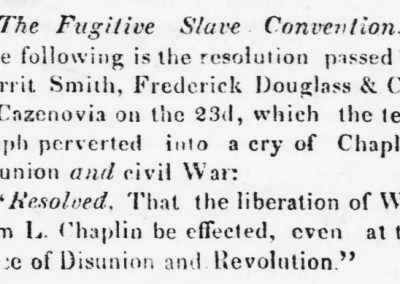 This article indicates that the Convention’s call to action was “perverted” by a telegraph that was received. 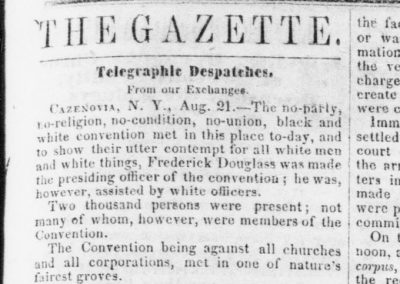 This Pennsylvania newspaper critiques Douglass’s role as president of the Cazenovia Convention.