The Author and the Agitator

In October of 1846, Frederick Douglass and William Lloyd Garrison returned to Belfast, Ireland to speak on stage together about their progress thus far in their several year journey to free America. During this time period, his supporters in England, primarily white female abolitionists, purchased Douglass’s freedom. These abolitionists contacted the Auld brothers, who had owned Douglass while he was enslaved, and made arrangements for purchase in the amount of one-hundred and fifty sterling pounds or $711.66. It was a bittersweet deal to receive manumission papers that would allow Douglass to return home safely to his family while some of his abolitionist friends disapproved of the purchase. They disagreed philosophically that the purchase legitimized slavery: “the objection was that no man had the ‘right of property’ in another man and, therefore, paying for the freedom of a fugitive slave reinforced the evils so condemned by abolitionists.” Some even thought his symbolic power of being a “fugitive” would diminish and the allure of his branded lecturing tours would fade (or perhaps that fundraising contributions or book sales would also dwindle). However, Douglass refuted such ideas by proclaiming his autonomous self: ” ‘I shall be Frederick Douglass still; and once a slave still. I shall neither be made to forget, nor cease to feel the wrongs of my fellow countrymen, who are yet in chains’ ” (Blight 171-172).

Douglass returned to America in April of 1847 as a freed man. He moved his wife Anna Murray and their children to Rochester, New York in November 1847 (Blight 190), soon before he attended and participated in the 1847 Colored Convention held in Troy, NY. The exile launched a more successful career once he returned to America. In December of 1847, he created his newspaper, The North Star (Blight 190).

Scholar Gerald Fulkerson contends that the Douglass’s trip to England catalyzed his image as a leader among abolitionists. Fulkerson reasons that the British understanding of Douglass as “a credible, glamorous symbol of the international anti-slavery crusade who had been driven by the moral bankruptcy of his own country to seek refuge in Britain” (Fulkerson 82). Douglass’s colleagues in the U.S. began to perceive him differently as well, as his popularity grew following the release of his 1845 Narrative and as word spread from Britain regarding his speaking abilities. Fulkerson contends that American abolitionists held the British anti-slavery movement in high esteem, and so British praise regarding Douglass elevated him further. Fulkerson also notes that they “internalized descriptions of [Douglass’s] charismatic leadership of the anti-Free Church movement, they blended a capacity-for-leadership element into the image” (Fulkerson 82).

In a letter to Caroline Weston (pictured right), Edmund Quincy claims that Douglass requested more money to speak. Quincy notes that he believes Douglass thinks himself worth more than the others coming to speak. This contributes to the new identity that Douglass takes on. He left the country as a fugitive slave, and he returns as a free man with new skills. This letter is an example of just how self-affirmed he became after his two years in Europe. This is the first instance Douglass seems to have embraced the idea that he is a powerful, intellectual man with great oratory skills.

Quincy was far from the only one person who believed Douglass’s increased pride after his European trip to be a negative. 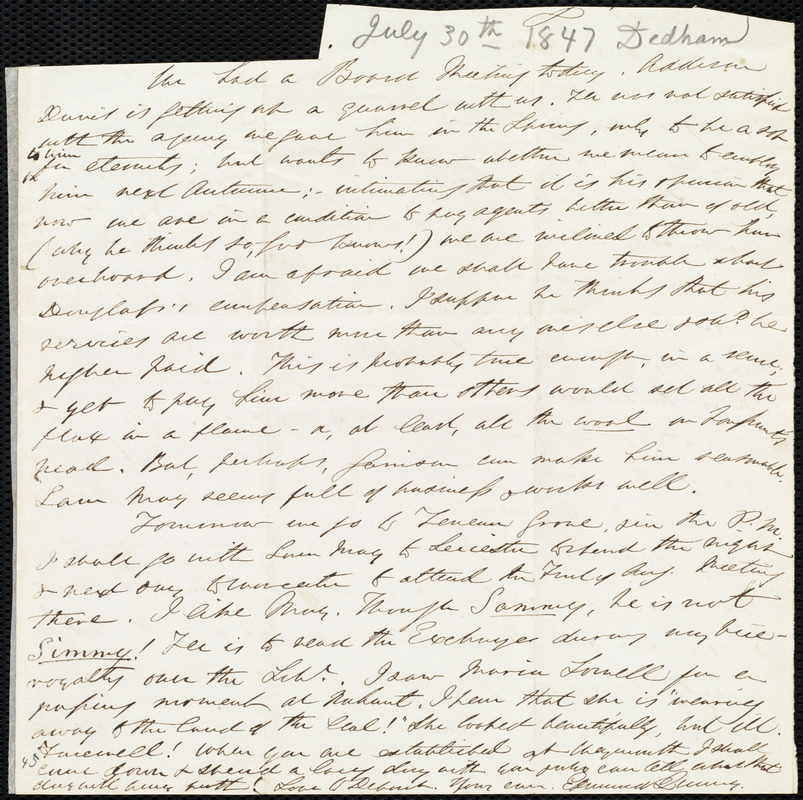 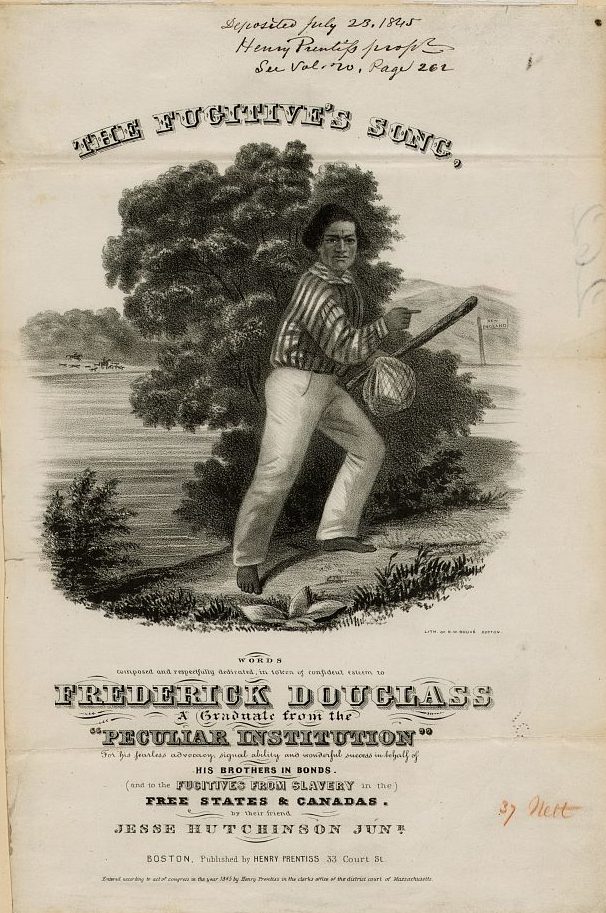 As Douglass’s fame as a black activist and abolitionist speaker grew, many sought to undercut his authority by satirizing him. Images and references to Douglass in the news media, primarily by white authors and editors, consistently referred to him as a “Fugitive Slave,” which was inaccurate by 1847, when his freedom had been achieved before he returned to the United States. Whether the media representations and descriptions were unintentional or fed by white slave owners’ simple refusal to acknowledge free African Americans, these word choices, along with depictions of Douglass with over-exaggerated features, helped to perpetuate negative ideas of Douglass and undermine his status as a free man.

The cover of “The Fugitive Slave Song” sheet music depicted on the left was initially intended to flatter, rather than mock Douglass. However, the image of Douglass as a barefoot, escaped slave negated much of the image Douglass had worked hard to craft of himself.

In addition to satirizing Douglass in caricatures, white editors also reported on speeches and appearances by Douglass with a negative lens, when they reported on the abolitionist cause at all. In the image depicted on the right, press coverage ridicules an 1847 speech Douglass delivered at the American Anti-Slavery Society. The headline above the caricature of Douglass screams “Abolition Fanaticism in New York,” and the author describes Douglass’s rhetoric as “flaming abolitionist speech delivered by the runaway slave, Frederick Douglass.”

This exemplifies the ways that in some newspapers, Douglass was villified for stirring abolitionist sentiments and, in the minds of pro-slavery proponents, needlessly riling the public. In discussing Douglass’s speech, white slaveholders describe him as a “presumptive negro” who “in spite of all the efforts of the American Delegates to prevent it…palmed off his Abolition bombast upon an audience of 7000 persons!” In discussing Douglass’s orations and work in such a manner, as well as depicting him in caricatures and as a runaway slave, proponents of slavery sought to undermine Douglass and other abolitionist’s work. 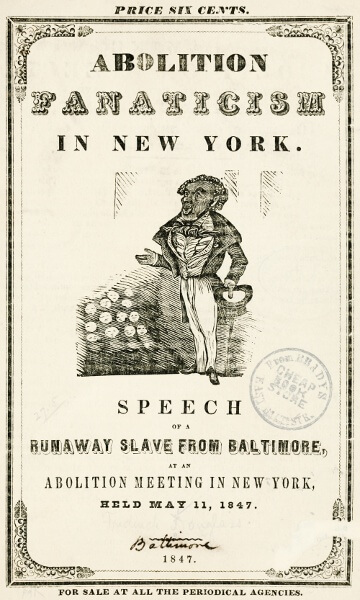 Plate 2.4: Unknown artist, 1847, Abolition Fanaticism in New York: Speech of a Runaway Slave from Baltimore, at an Abolition Meeting in New York, Held May 11, 1847. 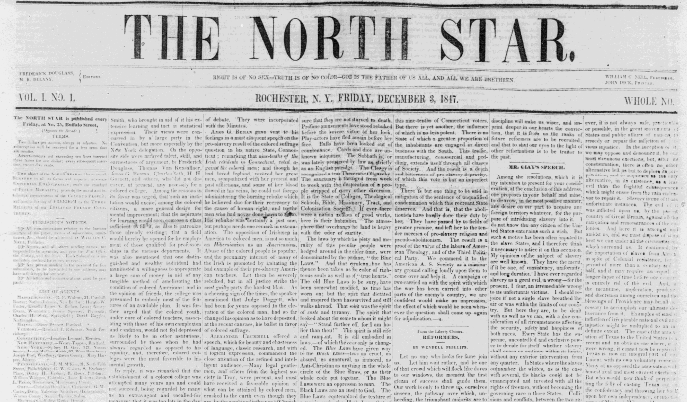 A New Friend and Business Partner

Shortly after Douglass’ return to the U.S., one of his closest friends from England, Julia Griffiths, arrived to manage the affairs of his new business venture. She proved instrumental to Douglass’ newspaper publishing, circulation, and editorial efforts. Among other tasks, Griffiths improved the spelling in the North Star, later the Frederick Douglass Paper. She wanted to ensure that Douglass “would achieve his goal of an ably printed newspaper that would be a credit to his race.” Douglass indicated his gratitude for Griffiths aid by saying “Think what editing a paper was to me before Miss Griffiths came! I had not learned how to spell; my knowledge of the simplest rules of grammar was most defective. I wrote slowly and under embarrassment—lamentably ignorant of much that every school-boy is supposed to know.” There is also evidence that she aided Douglass in editing his 1855 autobiography, My Bondage and My Freedom (Fee 17).

Some scholars have taken Douglass and Griffiths relationship past the purely professional, however. “Speculation among his contemporaries— critics as well as some of his friends—was that their relationship was sexual and, of course, even the slightest cordiality between a white and a black could arouse denunciations of race mixing. In New York City, the Griffiths sisters [Julia and Eliza] and Douglass had set off a street riot by walking arm-in-arm along the city’s Battery in 1849.78 Arriving in Rochester, the Griffiths sisters moved in with him and his family. The close living arrangements fueled more talk of scandal, and his strolls with a Griffiths on each arm provoked the same resentment among some Rochesterians as in New York City” (Fee 19).

Acknowledgements: “The Author and the Agitator” page written by Kayla Schreiber, PhD student in English at The University of Southern Mississippi