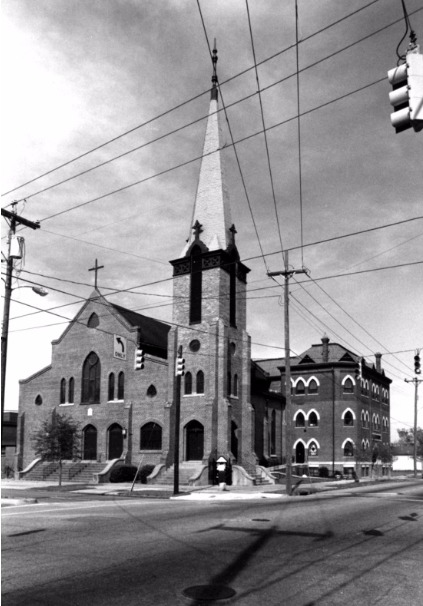 Copeland Hughes was a member of a community of educated, free, and free born Black women who were called to preach and teach in the Black church. The images that follow are meant to offer visual cues consistent with the information we have about Copeland Hughes, which suggest how she may have appeared. Using a concept coined by Dr. Carla Peterson, this exhibit will engage in some “responsible speculation” while tracing Copeland Hughes life and introducing the lives, images, and work of other nineteenth-century Black preaching women.

A preacher and well-known evangelist in her home state of North Carolina, Copeland Hughes received her license to preach with little fanfare. In fact, notes from the AME minutes of the Annual Conference Session, November 1861, the first time she appears in the archive, describe Copeland Hughes most favorably, “religious exercises conducted by Sister Sarah Ann the Evangelist of N.C.”  As an evangelist, Copeland Hughes’ preaching talent was recognized and validated. However, evangelists were not assigned to a church or given the responsibility of a congregation. Free-floating, evangelists and lay preachers were invited to serve as needed. For Copeland Hughes, this meant that men who were given charge of churches’ budgets and congregations, to which she had no access, had to invite her. Regardless, Copeland Hughes made a name for herself.

Copeland Hughes had been provisionally accepted at the North Carolina Conference in 1882 and called into full acceptance in the AME church in 1883, after which, she received her church in Fayetteville. Just six months later, at the 1883 AME General conference in Charlotte, a woman’s rights to preach to their own congregation was voted away. Copeland Hughes was immediately forced to turn in the monies she had received to support the church and her salary.

At the 1885 North Carolina Annual Conference, presided over by Bishop Henry McNeal Turner, Copeland Hughes was in attendance. Bishop Turner called Copeland Hughes and ordained her as a deacon, saying, he had “done something that had not been done in 1,500 years—that was the ordination of a woman to the office of deacon in the church.” The glory was short-lived. The following year, at the 1887 North Carolina Conference, a motion was introduced to strike her name from the list of deacons. At the 1888 AME General Conference in Indianapolis, Copeland Hughes was de-ratified.

In five short years, Copeland Hughes had been forced out of the denomination she loved, lost her church and status as a deacon then recognition as a member of the clergy. Copeland Hughes name does not appear in known AME records after 1888. 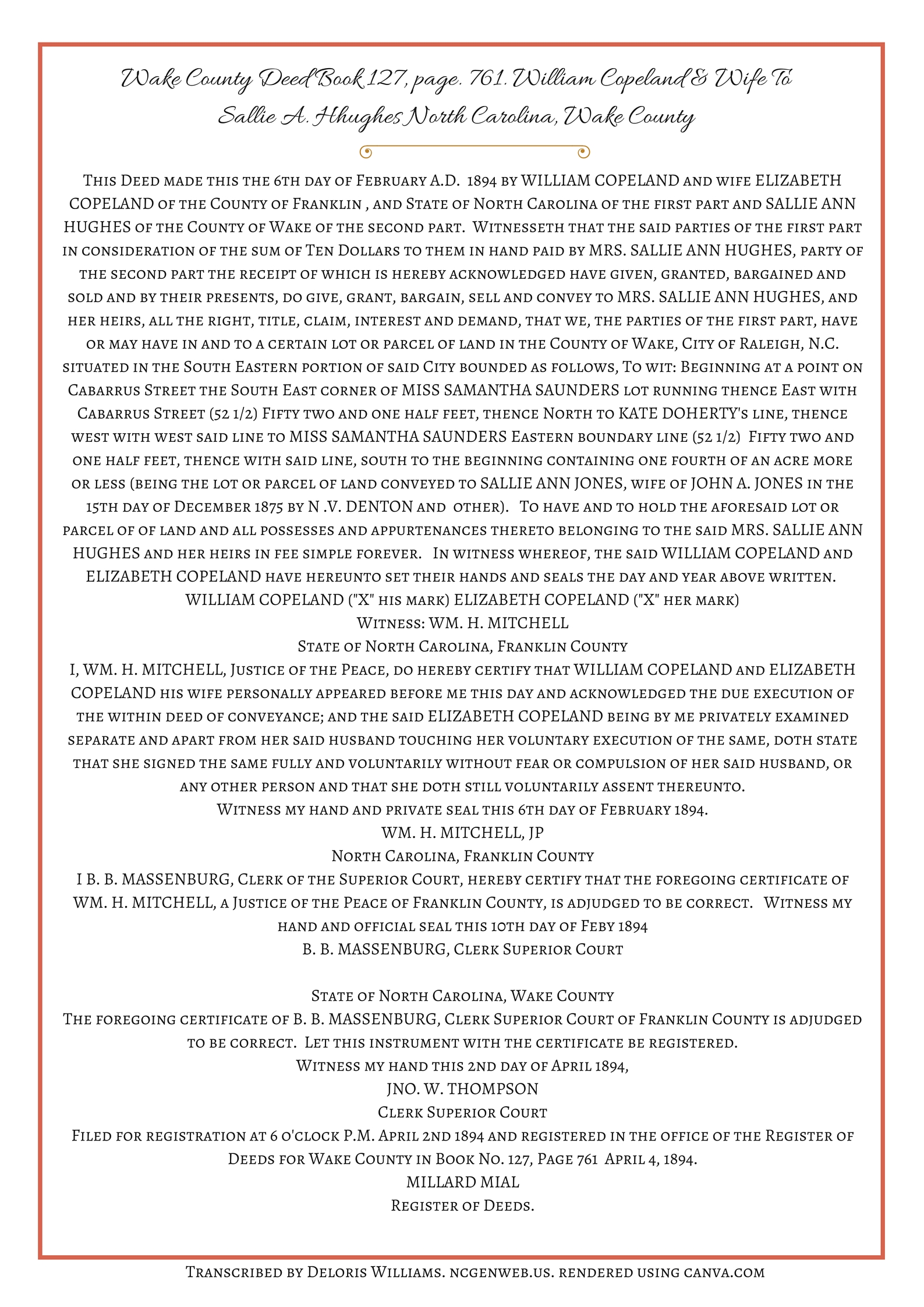 William & Elizabeth Copeland to Sallie Ann Hughes. William Copeland, b. 1822, married his 2nd wife, Elizabeth McCullers, b. 1830, on Nov. 15, 1855 Wake Co., Free Persons of Color. They lived in Wake, Granville and Franklin Counties by 1870; Sallie Ann Hughes was Elizabeth’s daughter, who was married to Henry Hughes of Wake County.

When or why she acquired the name Sarah versus Sallie is unknown. But, we now know when she died, what she died from, the name of her husband, the fact that they were financially independent and childless. They both lived to ripe old ages and were business and property owners. The Hughes never did leave North Carolina. Her husband, Henry Hughes, does not appear in AME church records. Did Sarah join another denomination? Was she so hurt by her experiences in the AME church that she forswore organized churches altogether? Those answers are not readily discernible. But the archive, with its limitations, waits.

Copeland Hughes appeared to disappear from the archive. The first glimmer was found in the 1900 Census for North Carolina. It listed, Sarah A. Hughes as a seamstress in Raleigh. Hughes could read and write and lived with husband Henry, a barber, on Ninth Street East in Raleigh, Wake County, Ward 3, Dist. 0144.  Searches conducted under Henry Hughes produced more information. Fabulous, intrepid, University of Delaware librarian Linda Stein, located the couple on 725 Worth Street, in Raleigh, North Carolina, confirming his race, birth date, and wife’s name and death date. Henry Hughes’ birth date was about 1842 in NC. He was a barber who eventually owned his own shop. His death certificate issued in 1920 stated he was a widower. His wife Sarah or Sallie died between 1910 and 1920. His wife is listed as Sarah in one record and Sallie in another record. Census records from 1880, 1900, 1910 for Raleigh in Wake County mention a Henry Hughs (different spelling) in North Carolina in 1850. Henry is nine years old at the time the census is taken and his father is listed as father Branch Hughs. This information matches Henry Hughes’ death certificate.