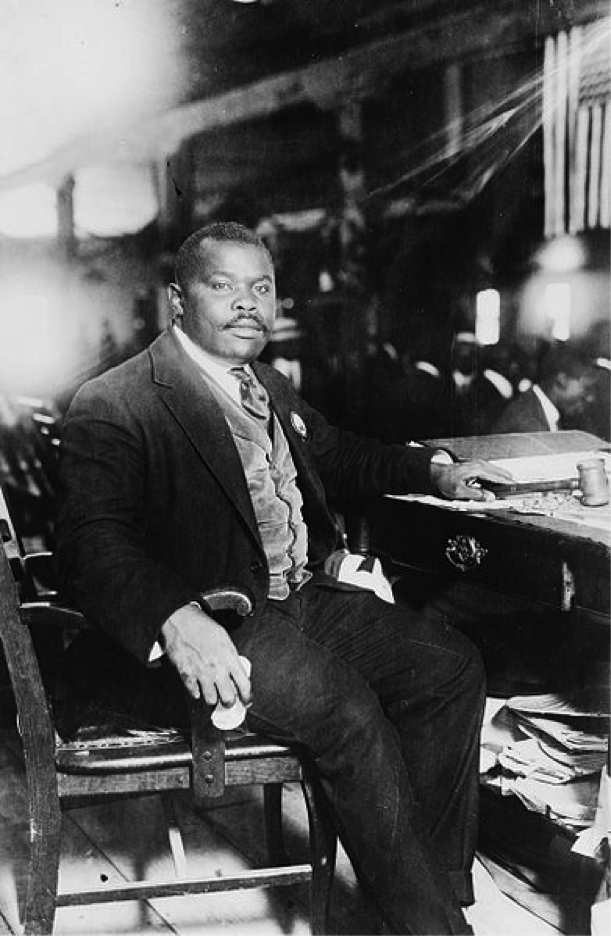 Marcus Garvey inherited the mantle that Bishop Turner left as his legacy to Black leaders at the turn of the nineteenth century. He represented the continuity of Black nationalist thought that Turner fostered. Garvey conveyed the same message, appealed to the same demographic, and essentially built on and expanded Turner’s legacy.

Garvey was born on August 17, 1887, in St. Ann’s Bay, Jamaica. Garvey, apprenticed to a printer at fourteen, became a master printer at eighteen. Garvey started his first newspaper in 1909, Garvey’s Watchman, which ran for three issues. Garvey founded the Universal Negro Improvement Association (UNIA-AC) with his soon-to-be wife, Amy Ashwood in 1914.

Garvey traveled internationally, visiting Central America, Africa, and London, then moving shortly after he returned to Jamaica to the United States in 1916. In May 1916, he embarked on a thirty-eight-state speaking tour, igniting many African Americans with his fiery oratory and calls for Black pride, economic power, and resistance. In May 1917, Garvey started the New York chapter of the UNIA-AC with thirteen members. In three months it swelled to 3,500 members who thirty-five cents each. Amy Ashwood joined him, working with him as he organized the many businesses and managed the administrative duties of the UNIC-AC offices.

Perceived as “Black Moses,” Garvey was a leader in the international Black nationalist movement who developed and deployed a Pan-Africanist ideology of racial pride, Black economics, and Black history. His ultimate goal was to create independent nation states on the continent of Africa for people of African descent.

Photo of Amy Ashwood. Courtesy of Black Past.

Africa, for Africans at Home and Abroad! 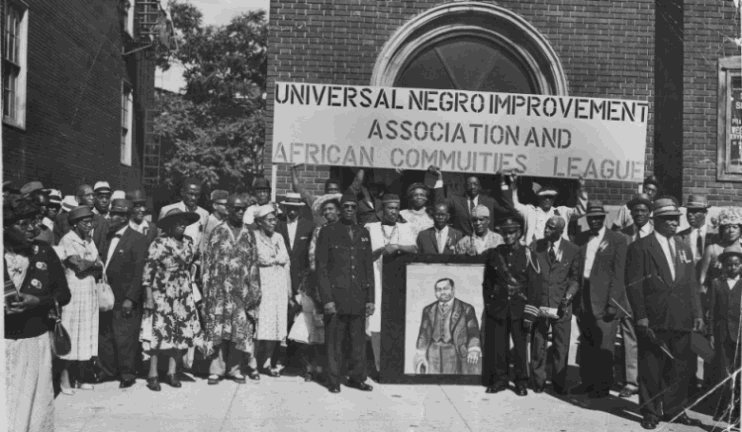 Garvey combined economic Black nationalist ideas, inspired by educator and statesman Booker T. Washington, and a Pan-Africanist perspective, with powerful oratorical performances, pamphlets, and newspaper articles to convey his message to communities of people all across the African diaspora but particularly in the Caribbean, America, and England. The UNIA-ACL supported the establishment of independent Black businesses all across the diaspora.

Garveyism developed in the midst of anticolonial movements, race riots in America, and eventually the upheavals of World War I. During the 1920s, Garvey’s UNIA-ACL was the largest Black, secular organization in Black diasporic history.

At its peak membership, the UNIA’s membership was estimated at six to eleven million; between 1916 and 1927, the UNIA grew into the largest Pan-African organization in history.

Garvey also organized the first of yearly UNIA-ACL Conventions held in Madison Square Garden, New York, with 25,000 delegates in attendance. This convention was followed by the massive, colorful Garvey Day parade, which were routed through Harlem. At the first convention, the UNIA-ACL flag was adopted. 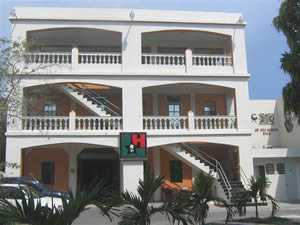 The mission statement of UNIA reads as follows:

The UNIA…aims at unifying the people of the African race all over the world. It recognizes the brotherhood of man; and it is our desire to clasp hands with all men of every nation, race and tribe, in the perfected state of a developed manhood.

Our motto is: One God! One Aim! One Destiny! The Right Excellent Marcus Mosiah Garvey

He established a network of “Liberty Halls” located in UNIA-ACL countries. The venues were used for political debate, theater, and scholarship around Black themes, raising awareness of African achievements and calling for economic empowerment to resist racism. 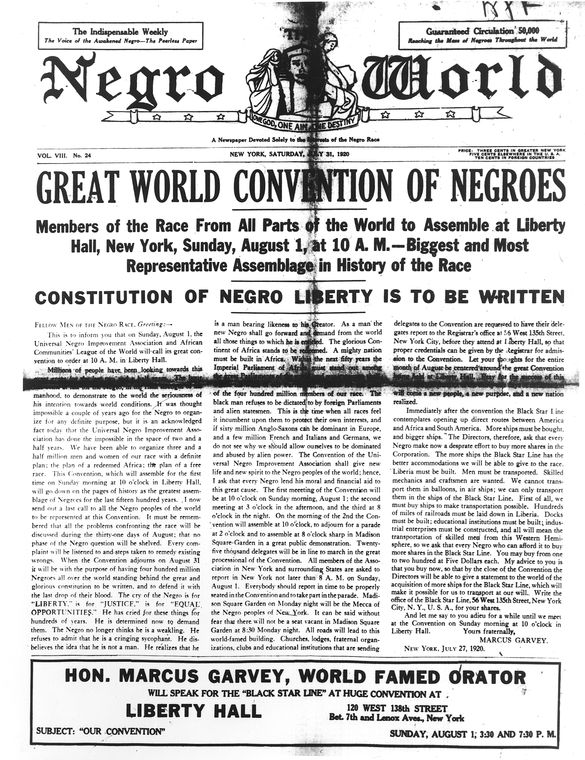 Garvey founded the newspaper The Negro World in 1916. The weekly newspaper, edited by Garvey, connected millions of UNIA-ACL members across three continents and 43 countries. 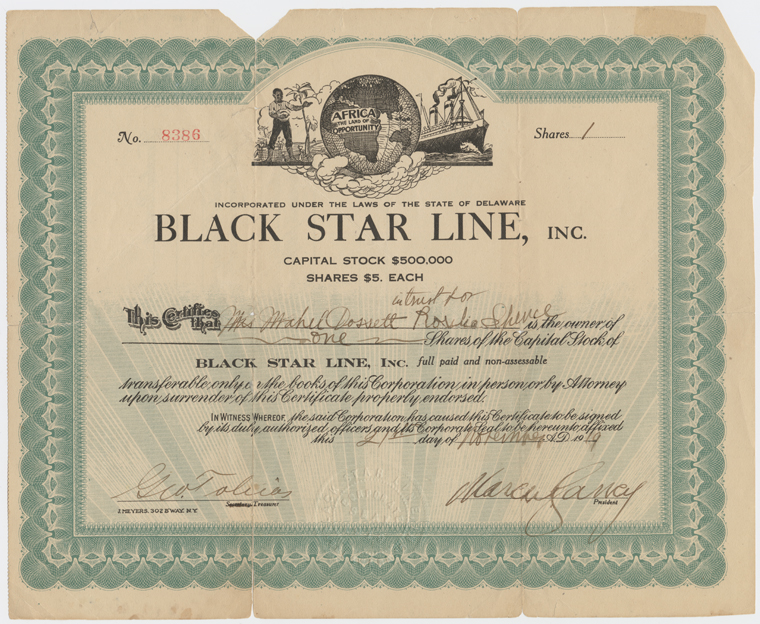 In 1919, Garvey formed the Black Star Line, an international shipping company to transport and encourage trade between Black businesses in Africa and the world. He also established the Negro Factories Corporation “with the goal of supporting businesses that would employ African Americans and produce goods to be sold to black consumers.”[1] 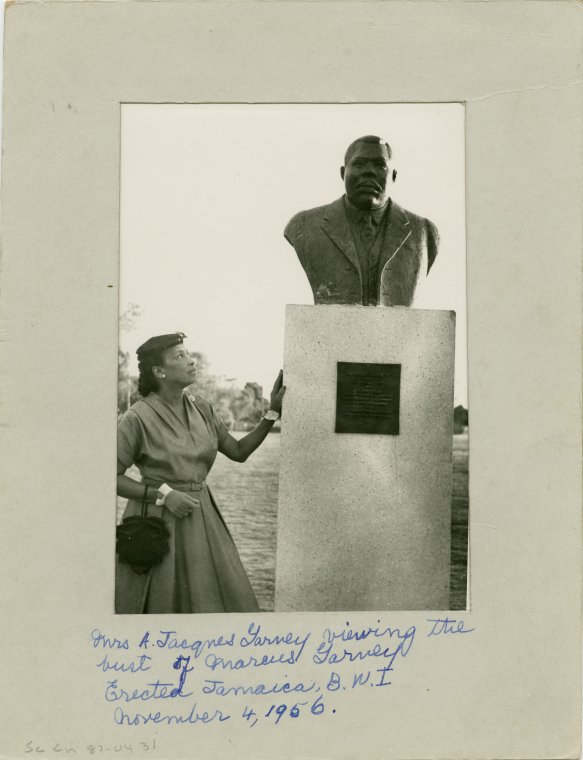 Garvey divorced Amy Ashwood Garvey and married Amy Jacques Garvey (1885-1973) in 1920.  An educated Jamaican woman, Amy Jacques Garvey became the editor of the Negro World newspaper and was recognized as a co-leader by Garvey. An activist and author in her own right, Jacques published: Volume One and Two of, The Philosophy and Opinions of Marcus Garvey in 1923 and 1925 respectively; A Memorandum Correlative of Africa, the West Indies and the Americas,” which she submitted to the U.N. in support of adoption an African Freedom Charter; Garvey and Garveyism 1963; and two collections of essays, Black Power in America and The Impact of Garvey in Africa and Jamaica.

Though Garvey’s businesses ventures foundered, his popularity across the diaspora was surging. Garvey and the UNIA-ACL were investigated, monitored and infiltrated by a young J. Edgar Hoover. Hoover worked as the special assistant to the Attorney General and head of the General Intelligence Division (or “anti-radical division”) of The Bureau of Investigation or BOI (which, after 1935, became the Federal Bureau of  Investigation). Hoover wrote to Special Agent Ridgely regarding Garvey: “Unfortunately, however, he [Garvey] has not as yet violated any federal law whereby he could be proceeded against on the grounds of being an undesirable alien, from the point of view of deportation.”[2] Following an intense, sustained investigation, Garvey was indicted for mail fraud by the US Justice Department in 1923. Garvey spent two years in prison before being deported to Jamaica. He later died in London. Shortly before and after Garvey’s death, newspapers articles erroneously wrote about him. Read about this news coverage here.

In Jamaica, the Right Honorable Marcus Mosiah Garvey is a national hero, and his bones were interred in National Heroes Park in Jamaica twenty years after his death in London. Children are taught about his life, legacy, and work while whole sections of his speeches live on in many popular reggae songs, unbeknownst to listeners. Garvey and his philosophies contributed to the development of the Rastafarian religion, which eventually saw the establishment of a community in Ethiopia called Shashamane. In multiple ways, Garvey inherited Turner’s legacy. Garvey arrived in Harlem a few years after Turner’s death. The timing and stark similarities in the visions, works, and legacies of these two men invite more than casual comparisons. This exhibit does not purport to do more than to invite the attention of present and future scholars, interested in these men, their work, and our history.

Special thanks to Accessible Archives and Gale®, part of Cengage Learning, for granting permission to host digital images of newpapers in its database, 19th Century U.S. Newspapers.