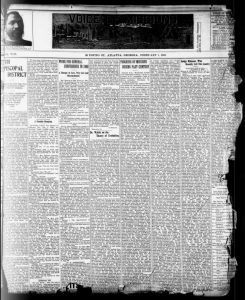 Front page of Voice of Missions from 1900. Source: University of North Texas Libraries.

Bishop Henry McNeal Turner is among the first public figures to repeatedly and unwaveringly declare the integrity and divinity of the Black body. Correctly identified as a Black nationalist, Bishop Henry McNeal Turner wrote a blistering article after reading a newspaper editorial that called him demented for saying that God was Black. Turner also published the sermon in the press, and numerous copies were distributed. Though African Methodism is identified with pride and dignity in race, Turner’s declarations were radical. This was also not consistent across AME leadership even though many in the pews popularly embraced it. Turner’s powerful exposition of Black divinity lives on in contemporary AME churches where it is often distributed during Black History Month celebrations. This text was printed in the Voice of Missions, 1898. Read “God is a Negro” in the slideshow below.

Printed in Voices of Missions, 1898. Reprinted in Martha Simmons’s Preaching with Sacred Fire: An Anthology of African American Sermons, 1750 to the Present (New York: Norton, 2010).