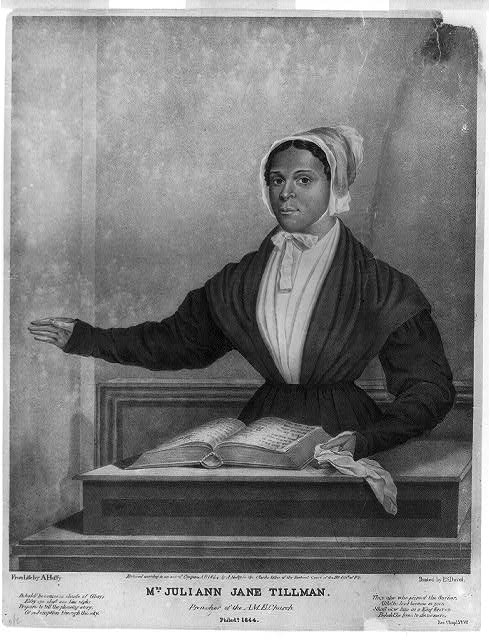 Mrs. Juliann Jane Tillman was a Black preaching woman contemporary of Bishop Richard Allen. Tillman was never ordained by the AME church but was apparently popular enough to warrant a lithograph of her done in 1844 in Philadelphia, which was reproduced many times. Unlike Copeland Hughes, we have Tillman’s image, but not her history.

Tillman’s prophetic voice impacted generations of African American women. Historians often cite Tillman when discussing nineteenth-century preaching women. More interestingly, an amateur genealogist, was given a family Bible, discovered in a wall of a house he was demolishing. The Bible belonged to an African American family circa the 1800s. The genealogist was able to trace some of the members of the family listed in the bible in the archives. The Bible, which belonged to Mrs. Elvira Vermilya Anderson of Dayton, Ohio, has an entire copy of Mrs. Julian Jane Tillman’s newspaper article pasted in the front.  See excerpt below.