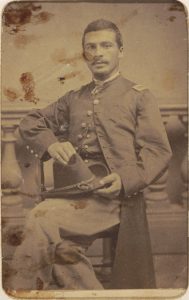 The Albany Manual Labor Academy was founded in 1847 in Athens County, Ohio. It began as a family-run academy. “William Lewis, a graduate of Oberlin College, his wife Eliza, and William’s sister Lamira, who had originally begun to teach students in her father’s home, opened the Lewis Academy… In 1850, the academy, shifting from individual ownership to joint stock company, was renamed the Albany Manual Labor College.”[1] The Lewis family actively engaged in anti-slavery efforts in Ohio, organizing meetings and promoting the liberal tenets of Oberlin College. It is also no surprise that the university was one of the Underground Railroad’s stops in Ohio. In 1853, the state of Ohio granted the academy a charter; it was thereafter renamed Albany Manual Labor University. Lamira Lewis, later Lamira Hudson, was listed as a member of the university’s board of trustees in 1859.[2]

In 1849, the Academy announced its mission in the Saturday Visitor stating, “By combining Manual Labor with study, we intend to rebuke the withering spirit of caste, and as far as our influence extends, make all forms of useful industry respectable, and furnish community with practical men and women instead of mere theorists.”[3] The Albany Manual Labor Academy sought to provide a high quality-learning environment that had been relatively inaccessible to African Americans. The Academy’s first president was Rev. Joseph Gordon. The school welcomed students of all colors and sexes. The academy’s tuition ranged from $2.5 to $4 per academic term. In addition to tuition, students paid $2.50 for a room and $1.50 per week for board. The institution sat on a six hundred-acre piece of land that students used for the labor portion of their studies. Despite advertising “equal opportunity” for all, the academy, like many manual labor schools, had separate manual labor curricula for men and women. 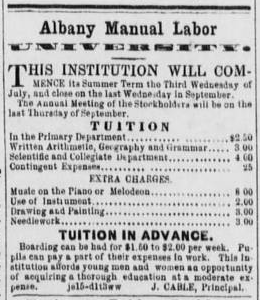 People were invited to invest in the institution with shares available for $25 each. The only requirement for shareholders was that they be “of good moral character,” which meant that they could not own slaves. The Albany Manual Labor University was staunchly against slavery and rejected any association with slaveholders. Its constitution asserts:

No person of good moral character, who is not a slaveholder either in practice or principle shall be denied the privilege of being a stockholder in the institution; no one shall be rendered ineligible to office, or refused admittance as a student, on terms of perfect equality, on account of caste, color, or place of nativity. . . . [4]

Insufficient funds forced the academy to close its doors in 1862. A Christian society bought the academy’s land and building and established Franklin College, a whites-only school. Franklin College was unsuccessful; it ran out of funds when it relocated to Wilmington, Ohio. The Society of Friends purchased the unfinished construction and established Wilmington College, which still operates today.[5] It is unclear when Wilmington College started admitting African Americans, but, in 1902, William Yoakley, an African American teacher, graduated from Wilmington, extending his credentials and becoming the school’s first Black alumnus.[6] He later studied medicine and became a doctor.

Although the Albany Manual Labor University was only open for a little over two decades, it pioneered the opening of more Black schools in Athens County. Prominent African Americans in the area responded by establishing the Albany Enterprise Academy.