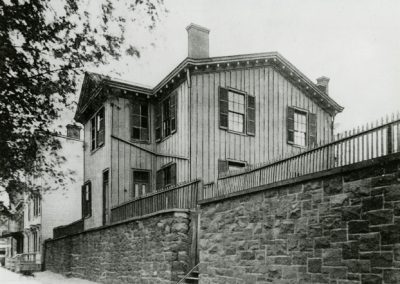 Colored School No. 2, the institution at which Junius Morel was principal.

Junius C. Morel (ca.1814-1874) was born in North Carolina,[1] but it was in Philadelphia, Pennsylvania, where his career began.[2] Morel wrote for multiple publications and participated as a delegate in several conventions. Initially, he served in the 1831 and 1832 conventions as a secretary[3] and an assistant secretary[4] respectively. Later in the 1843 National Convention of Colored Citizens, he was appointed as member of the planning committee.[5] Morel later moved to Brooklyn where he wrote for several Black newspapers—including Frederick Douglass’ Newspaper[6]—and taught at Colored School No. 2. Some sources identify him as the principal of the school.[7] All the while Morel maintained presence in the conventions. This is the educational background from which his position on the college of manual labor in the 1853 convention hails.

Morel’s take on education is clear on Liberator’s report of an Equal School Rights meeting that took place beginning on December 10, 1849.[8] There, several esteemed educators spoke on what they deemed universally important for the educational system. At this meeting, Morel advanced his belief in integration, even going as far as to say that exclusively Black institutions were “fostering the fell spirit of colonization”[9] that African Americans aimed to subvert; this was Morel equating any form of racial exclusion to promoting the blatant oppression of colonization. It appears as though to Morel, education was paramount to equity, and as such he advocated for it on behalf of every student, not just the students of color.