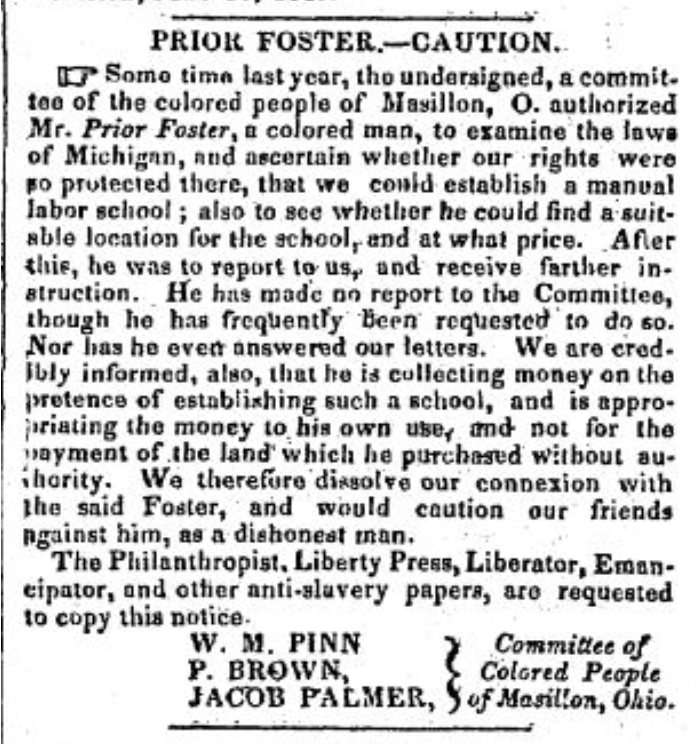 Image of an article from The Liberator warning the public about Prior Foster, from 1843. Source: ©2008 Gale, a part of Cengage Learning, Inc., 19th Century U.S. Newspapers. ©2008 Reproduced by permission: www.cengage.com/permissions.

Prior (sometimes spelled Prier) Foster was born around 1798 in Pennsylvania.[1] In 1844 he founded the Woodstock Manual Labor Institute in Woodstock, Lenawee County, Michigan, which was officially chartered by the Michigan state legislature in 1848.[2] Foster faced racial persecution in his home state and moved to the west “in exile,” in the hopes of securing greater equality for himself and his children. He opened the Woodstock Institute in Michigan because African Americans had greater rights there, and Foster wanted the school to educate “colored people and others.”[3]

However, there was considerable controversy surrounding Foster’s fundraising and advertising methods for the Institute. Several newspapers circulated “warnings” regarding Foster’s character, submitted by a committee of African Americans from Masillon, Ohio, who claimed that they had asked Foster to assess Michigan laws and determine whether a vocational school could be established in the state.[4] This committee alleged that Foster never contacted them again and instead proceeded to collect money and establish the Institute by himself.[5]

It was alleged that Foster kept the economic records of the Institute private, despite requests for them to be public.[6] Frederick Douglass’ paper, North Star, also accused him of using their masthead to publicize the Institute, despite the fact that Foster had never received an official endorsement from Douglass. Foster circulated advertisements for the school claiming to have the well-known newspaper’s approval without their consent.[7]