Clorice Esteve Reason (1822–1884) was the daughter of French West Indian immigrants. She married Charles Lewis Reason on August 22, 1855.[1] Like many wives of prominent Black leaders, Clorice Reason participated in civic engagements. In particular, she was a member of the Ladies’ Union of Brooklyn and New York.[2] As part of the this union, Reason worked alongside many notable women such as Julia Williams, the wife of Henry Highland Garnet. Together, the women contributed $1,464 to support the Colored Orphan Asylum and Association in 1862.[3] When the orphanage was destroyed by a white draft riot in 1863, the same association of women again was instrumental in raising funds for the school.[4]

The Reasons were part of New York’s Black elite community, and an 1870 census lists their personal estate to be worth $6,500.[5] The same census mistakenly indicates that the couple was white. As a free Black family in New York during the Civil War era, both of them were crucial in providing aid to the newly freed population. Although there is significantly more information regarding the aid provided by Charles Lewis Reason, it can be inferred that, during her marriage to Charles L. Reason, Clorice Reason engaged in more activism than what is documented.

The Reasons closely worked with the Garnets and Downings to agitate for immediate abolition. While Clorice Reason did not leave any personal documents that would serve as windows to her thoughts, one can conclude that she shared their sentiments. Her interactions with Julia Williams, who co-wrote Garnet’s “Address to the Slaves,” meant that she might have been well versed in a more radical discourse. 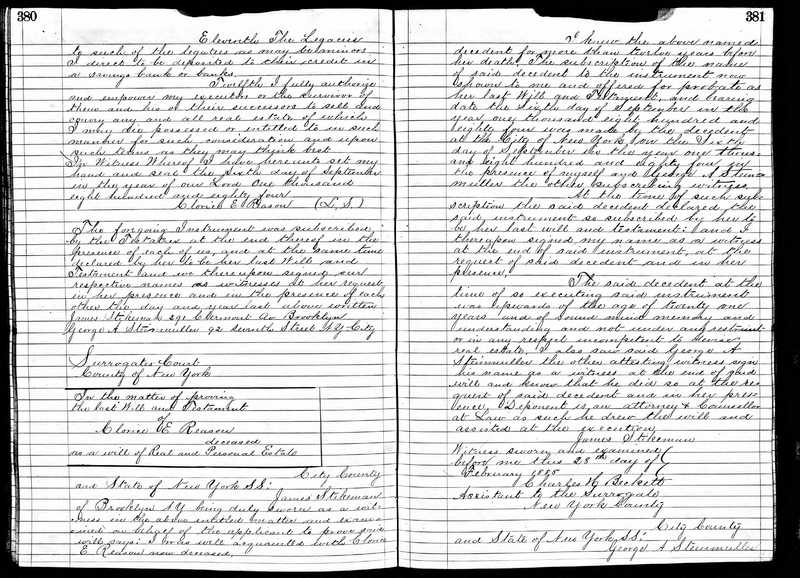 One of Charles Reason’s students, Maritcha Lyons, wrote about Clorice Reason in her memoir. Lyons became a teacher and socialized among New York’s Black elite women. Not only did she admire Charles Reason’s intolerance for mediocrity, of Clorice Reason, she writes: “To Mrs. Reason belonged the honor of being able to ‘hold a salon’; her strain of French blood made her queen of entertainers and covered her with a taste in social functions that was irreproachable.”[6] Nineteenth-century Black communities, like the one in which the Reasons lived, were tightly knit because networks of friendships and acquaintances were crucial to each person’s survival. Through her entertaining salons, Clorice Reason fortified the bonds among Black women, ensuring that their connections would endure in times of need.

Clorice Reason died on December 27, 1884, leaving Charles Reason a widower for the third time. She was buried in Green Wood Cemetery, Brooklyn, where her gravestone still stands.[7]