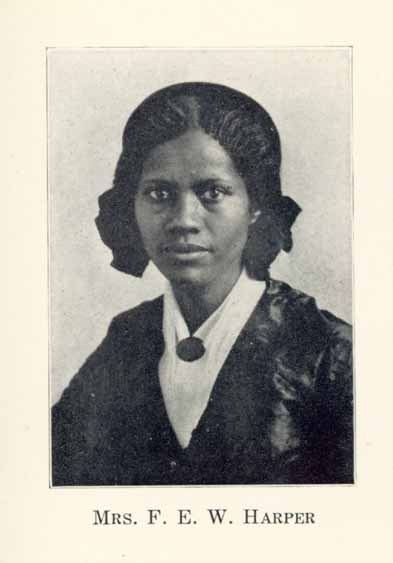 ABSTRACT:  Frances Ellen Harper (née Watkins) was born in Baltimore, Maryland in 1825. She was a free Black woman who worked as a traveling lecturer, a writer, and a powerful activist for women’s and Black rights. Harper was a key participant in the Cincinnati Colored Convention of 1858, serving as the only woman delegate. At the Convention, Harper spoke powerfully in the debate on emigration, helped to establish the Ohio State Anti-Slavery Society, and helped raise money for the cause.

Frances Ellen Watkins Harper was born to free Black parents on September 24, 1825, in Baltimore, Maryland. Following the death of her mother when Harper was three-years-old, her aunt and uncle took her in and raised her through adolescence (Washington).  Her uncle, the Reverend William J. Watkins, Sr. was a civil rights activist and leader in Baltimore’s Black Sharp Street Church. He also deeply valued education. He and four of his sons were teachers at the school he founded, Harper Academy for Negro Youth (Washington).

As a teenager, Harper worked as a seamstress and domestic for a white Quaker family (Washington). While working, she continued reading and writing, and published her first book of poetry, Forest Leaves, around 1846 (Gates). This work was published well before Harper joined the Abolition movement, and gives us insight into her early life in Baltimore (Ortner).

In 1851 Harper relocated to Ohio for a brief period (Gates). She taught domestic science at Union Seminary, an African Methodist Episcopal (AME) school located outside of Columbus, Ohio. She was the first woman faculty member at this school, which was later merged into Wilberforce University (Parish). Not long after, she moved to Little York, Pennsylvania, where she again attempted teaching (Harper in Still).

The catalyst for Harper’s career came in 1853. Her home state of Maryland had a law forbidding free people of color from entering the slave state. One free Black man who violated the statute was sold into slavery in Georgia, attempted to escape, was recaptured, and died of exposure while being punished. Harper cited this event as her inspiration for turning her life to racial uplift. She wrote to a friend “Upon that grave, I pledged myself to the Anti-Slavery cause” (Harper in Still).

So in 1854, she inquired with Anti-Slavery societies, first in Philadelphia and then in Boston and began to find success lecturing. In a letter in 1854 she said that she was “out lecturing. I have lectured every night this week” (Harper in Still). Harper was incredibly committed to spreading the word and fighting for the freedom of her people.  Harper was employed by the Maine Anti-Slavery Society from 1856 until 1860, traveling across the Northeast lecturing on Abolition.

During this time, she traveled to a number of Anti-Slavery meetings and conventions, including the 1858 Convention of Colored Citizens of Ohio in Cincinnati. Harper had attended Conventions before, as had her cousin William J. Watkins. William had even been present at the 1855 Convention where Mary Ann Shadd presented herself as the delegate for Canada. Indeed, he had spoken on her behalf when other attendees questioned the propriety of a woman delegate (Washington; Colored National Convention, 1855).

Perhaps he spoke again on behalf of his cousin in 1858 when Frances Ellen Watkins Harper sought the status of delegate in Cincinnati. Considering how few women delegates served at the Conventions and the attitudes towards respectable women in the public sphere at the time, it seems likely there was opposition to her request. If so, it was overlooked or intentionally left out of the official Minutes. The only reference to her entry was a single sentence: “Miss F. E. Watkins was requested to take part in the Convention” (Convention of the Colored Men of Ohio, 1858).

Other sources, however, tell us that Harper’s relative absence from the minutes is misleading. Coverage of the Convention in both the Anti-Slavery Bugle and the Liberator listed Harper among the “principal speakers” in the lengthy and spirited debate on Emigration, although unfortunately neither printed or summarized her speech (Liberator, Anti-Slavery Bugle).

We can guess that the speech would have been strongly and eloquently against Emigration and Colonization schemes. Harper’s uncle and guardian, William Watkins Jr., was fiercely opposed to Colonization, and wrote on the issue frequently. Frances Ellen Harper would have heard that rhetoric growing up (Washington).

By the late 1850’s, Harper may have been more sympathetic toward voluntary Emigration to free countries. Life for free people of color in the US had gotten more difficult since the passage of the Fugitive Slave Act, and even her Uncle William Watkins and several family members had moved Canada (Washington). Frances Ellen Watkins Harper herself wrote of her first visit to Canada, “Well, I have gazed for the first time upon Free Land! And would you believe it, tears sprang to my eyes, and I wept” (Harper, Poems).

When it came to African Colonization schemes, however, Harper was as staunchly opposed as her uncle. In a scathing 1862 essay in The Christian Recorder, she lambasted Lincoln for considering Colonization:

“[W]e neither see the wisdom nor expediency of our self-exportation from a land which has been in large measure enriched by our toil for generations, till we have a birth-right on the soil, and the strongest claims on the nation for that justice and equity which has been withheld from us for ages” (Quoted in Sinha).

Perhaps the essay draws from arguments Harper had made four years previous, convincing the Delegates and the crowded church to pass the resolution against emigration:

“Resolved, That we say to those who would induce us to emigrate to Africa, or elsewhere, that the amount of self-sacrifice required to establish a home in a foreign land would, if exercised here, redeem our native land from the grasp of slavery; therefore, we are resolved to remain where we are, confident that ‘truth is mighty, and will prevail’” (Convention of the Colored Men of Ohio, 1858).

Harper’s involvement in the convention extended into its establishment of the Ohio State Anti-Slavery Society. She donated $10 to the cause at the convention and joined the five-person committee to raise $500 for the new organization. Over a year later, she was still involved in the committee organizing the group’s first annual meeting.

Harper also addressed the 1873 Colored Convention. Only a brief description of her address appears in the minutes: “She spoke in eloquent terms of the efforts of the colored people and hoped they would not cease until equal rights were in fact within the reach of all.” The convention focused on the state’s exclusion of African Americans in the education system in spite of the tax contributions of Black residents.