ASSISTING SELF LIBERATION IN THE ERA OF FUGITIVE SLAVE LAW 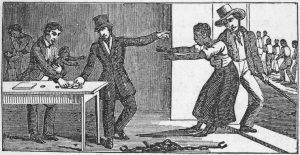 The Fugitive Slave Law, enacted as part of the Compromise of 1850, favored slave-catchers in northern legal proceedings where accused fugitives could not testify on their own behalf. Many, if not most, of the delegates to the 1858 convention had participated in the Underground Railroad supporting runaways seeking to liberate themselves. The cost of failure could be starkly visible in Ohio, as in the case of Margaret Garner and her family who were captured in Cincinnati in 1856. In her desperation, Garner killed her two-year-old daughter to prevent her, she said, from enduring a life of enslavement. The following year, Frances Ellen Watkins wrote the poem “Slave Mother–A Tale of Ohio.”

The Fugitive Slave Law favored slave-catchers and forced citizens of northern states to cooperate in turning in fugitives. Those who refused or harbored escaped slaves were subject to prosecution. In 1858, an escaped man named John Price was arrested by a marshal in Oberlin, Ohio. Residents in Oberlin and Wellington, where Price was detained, forced the officials to release Price. Convention President Charles H. Langston eventually arranged Price’s safe passage to Canada. Thirty-seven of Oberlin-Wellington Rescuers were indicted. Only Charles H. Langston and Simeon Bushnell, a white man, faced trial. Although the Democrat-dominated jury found them guilty, both were given light sentences, with Langston only enduring twenty days of imprisonment.