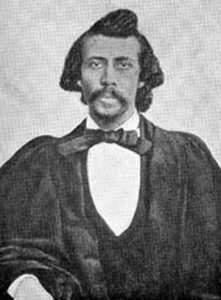 William Howard Day was an African American abolitionist and emigrationist. Day’s role as one of the leaders issuing the call for the 1853 National Colored Convention in Rochester underscored the young Oberlin College graduate’s growing prominence in the abolitionist community.1 His position at the 1853 convention was preceded by his 1849 address in the 1849 state Colored Convention in Ohio where his powerful oratory skills gained attention.2 Day published proceedings of the Ohio State Convention in the Aliened American, his Cleveland-based newspaper.3 He traveled about 250 miles to Rochester to serve as one of the convention’s vice presidents.

The Aliened American, Day noted, featured “literature science and art to aid the development, educational, mechanical, and social, of Colored Americans.”4 The paper’s masthead included the motto, “Educate your children- and hope for justice.” Day’s newspaper suggests a positive position on the manual labor college initiative. However in 1854, Day’s position on the college was made clear: “We do not believe a school is needed, and the money to be raised for that purpose could be expended for the benefit of colored people in a vastly better way5.” That same year Day would diverge from the mainstream of Black politics by attending the National Emigration Convention of Colored Freeman.6 Day’s emphasis in 1854 on “the futility of an Industrial College”7 along with his shift to pro-emigration suggests a change in his beliefs between 1853 and 1854. Despite his support for African American education, he was against the implementation of the manual labor college plan.