Abstract: Margaret Garner was born into slavery in Boone County, Kentucky. She, her husband Robert, his parents, and their four children attempted to run away to Cincinnati in 1856. Garner was important to the 1858 Cincinnati Colored Convention because when the family was caught, she killed her daughter. The family was returned to slavery, but her desperate act and the family’s cruel fate were fresh in Convention delegates’ minds in 1858.

The story of Margaret Garner and her family is dramatic, with many twists and turns, as well as, disturbing and heartbreaking events. Late on January 27,1856 in rural Boone County, Kentucky, a group of eight slaves ran from slavery toward freedom. One of these slaves was Margaret Garner, along with her husband Robert and their four children, Tom, Sam, Mary, and Cilia. Margaret Garner was a domestic servant, who worked mainly in the home with her master’s children, nursing them and helping around the house. Garner accompanied her masters multiple times when they visited Cincinnati for business. When this group of slaves that included Garner attempted to escape bondage, they headed for the Ohio River, about sixteen miles away. After crossing the river, the group soon entered Cincinnati, in the free state of Ohio, and headed two miles into town to the home of their relatives, the Kites, freed blacks who had formerly lived in Kentucky (Reinhardt 4).

The fugitives entered the house before daybreak. After an early breakfast, Garner’s cousin, Elijah Kite, set off to get help from Levi Coffin. Coffin told Kite that the Garners must be removed immediately. Coffin directed Kite to move the Garners up Mill Creek to a settlement of Blacks in the western part of the city, and then Coffin would make further arrangements to forward them further on the Underground Railroad. However, when Kite returned to the home he was too late. A few minutes after he returned the Garners were surrounded by deputy marshals and Cincinnati police. As the white officials were about to enter, Margaret Garner attempted to kill her children. Before the men had found her, Garner had successfully killed her two-year-old daughter Mary (Coffin).

Garner and her family were taken into custody, yet instead of being released back to their master, they were held and put on trial. Garner was not immediately tried for the killing of her daughter. After a long winding and complicated trial, the judge ruled for Garner to be returned to her master. Once Ohio authorities had received a warrant to try Garner for murder, they were unable to find her for the arrest. Garner’s owner kept moving her between cities in Kentucky in order to avoid giving her up to the authorities. Authorities were close to retrieving her in Louisville, but before they arrived Garner had already been sent on a boat to Arkansas. It was reported that on her way down the river she sprang from the boat into the water with her child in her arms; when she rose, she was seized by some of the boat hands and rescued, but her child drowned (Coffin). Her husband, Robert Garner, in an interview after her death stated that Garner never tried again to harm her children, but that she had often expressed that it would be “better for them to be put out of the world than live in slavery.” Margaret herself died in slavery in Mississippi in 1858 of typhoid fever (Weisenburger 11).

Historians do not know why Margaret Garner killed her daughter because there is no definitive evidence.  Historian Nikki Taylor notes that both Frances Ellen Watkins and white abolitionist Lucy Stone believed that she did so to protect the child from the ravages of slavery. African American women in Cincinnati were sympathetic to Garner protested at her trial (Taylor).  The tragic events surrounding the capture of the Garner family must have been fresh in the minds of Cincinnati delegates to the 1858 state convention. 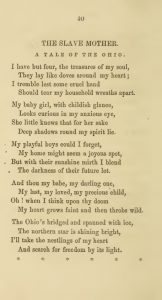 Frances Ellen Watkins Harper. The Slave Mother, a Tale of the Ohio. Courtesy of Internet Archive. 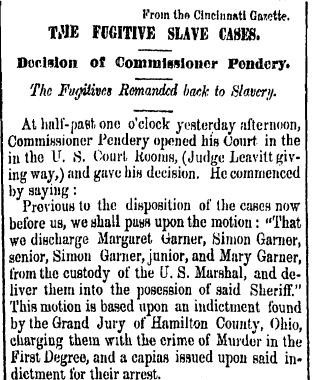