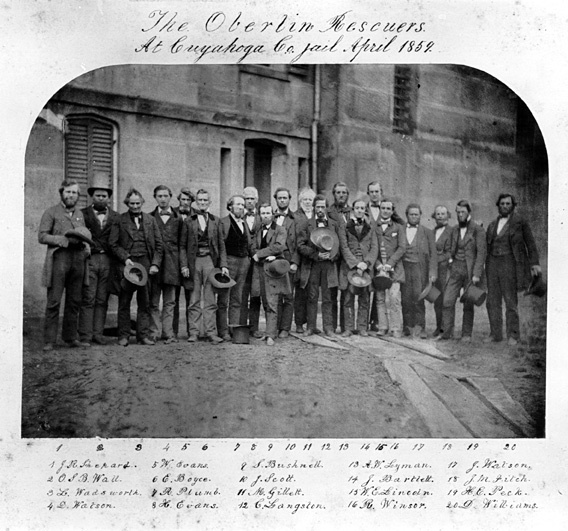 An image of the Oberlin-Wellington Resucers taken May 7, 1859. Among them Charles H. Langston (front row, seventh from right) who was convicted of breaking the Fugitive Slave Act. “Oberlin Rescuers at Cuyahoga County Jail, April 1859” Courtesy of Oberlin College Archives.

Charles Henry Langston sat on the committee that proposed the Manual Labor School at the 1853 Rochester convention. (1) The proposal outlined a mixture of scholarly, mechanical, and agricultural studies that would enhance African Americans’ capacity in politics and in business. (2) The committee felt that a combination of intellectual prowess and healthy bodies would promote jobs and economic security in Black communities, thereby gaining respect, recognition, and full citizenship in the United States. (3)

Langston was one of the first African Americans to attend Oberlin College where he became a political activist and educator. Langston was appointed as the western representative of the Sons of Temperance in 1848, where he promoted education and political rights. (4) He went on to become president of the Ohio State Colored Convention in 1849. (5) He also sat on the committee of correspondence that advocated for a national Black convention to be held in Buffalo, New York, in 1852. (6) In 1853 he became involved in the Ohio Anti-Slavery Society. (7)

Even though Langston was a political activist, some of his compatriots criticized his disapproval of women’s political power. Elizabeth Cady Stanton’s newspaper, The Revolution, claimed that Langston openly opposed women’s suffrage during the 1868 campaign in Kansas. (8) He and the other members on the Manual Labor College Committee briefly touched on the idea of a Department of Industry for Females, proposing light artisanal trades such as weaving, binding, paper box and straw hat making. (9)

Langston continued his political activism and work in education when he moved to Kansas in 1869, after marrying Mary Patterson Leary. (10) He founded a school at Leavenworth for freed children who had become refugees during the Civil War, and in 1872 was appointed president of a Black normal school at Quindaro College, one of the first Historically Black Colleges west of the Mississippi. (11)

[9] “Proceedings of the Colored National Convention, Held in Rochester,” 32