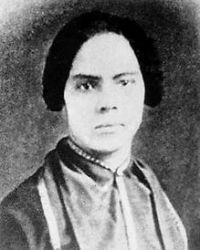 In 1823, Mary Ann Shadd was born in Delaware to a free couple. Shadd is recognized today as the first Black female editor in the United States and, after emigrating as an adult, one of the first female journalists in Canada.

After the Fugitive Slave Act of 1850, Shadd and one of her brothers left the US to move to Canada. Encouraged by Henry and Mary Bibb—two active attendants at the 1854 Emigration Convention—Shadd later became a teacher. After doing so, she successfully established a school for Black children and, in 1852, published several pro-emigration booklets. One of her most well-known pieces is titled A Plea for Emigration; or Notes of Canada West, which encouraged her Black readers to emigrate to Canada. The year before, Shadd has been the only woman present at the first Convention of Colored Freemen.

Much like her father, who edited the Liberator alongside William Lloyd Garrison, Shadd was inspired to create her own newspaper in order to pursue her pro-emigration and abolitionist goals. She did just that, publishing the first issue of Provincial Freeman on March 25, 1854. Shadd did not place her name under the masthead of the paper, “thus concealing the paper’s editorship” [1]. In addition to including her own articles (without crediting herself) in the paper, Shadd incorporated the work of other influential abolitionists and pro-emigrationists, such as Martin Delany.

Although Mary Ann Shadd was not in attendance at the 1854 Emigration Convention, it can be said that her pro-emigration pieces in the Provincial Freeman were incredibly influential as associated textual pieces engaging the convention event. The following year, Shadd maneuvered her way into the 1855 Colored Convention. Although her emigration ideas clashed with some delegates, Shadd presented a speech at the convention. It proved convincing to the delegates so much so that they granted permission to extend her speaking time.

Following this, Shadd met and later married Thomas F. Cary in 1856. Four years later, due to financial issues, the Provincial Freeman folded. The couple and their two children then returned to the US after the beginning of the Civil War. Shadd worked as a recruiting officer in 1863, encouraging African Americans to enlist in the war and fight for the liberation of their race.

Towards the end of her life, Mary Ann Shadd earned a law degree in 1883, achieving the status of the second Black woman to do so in the US. She later died in 1893.