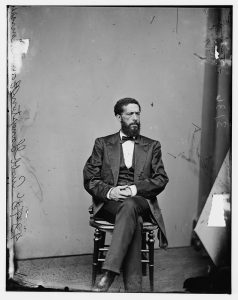 John Mercer Langston was born free of mixed racial heritage in Louisa County, Virginia. He was an attorney, politician, and the first dean of the Howard University Law School [1]. Langston was important to the 1858 Cincinnati Colored Convention because he advocated stronger education standards, a new way for enslaved and free Blacks to use their political capital in nineteenth-century America. These causes coupled with the political changes of pre-Civil War America at the time of the 1858 gathering allowed Langston to be a prominent leader in the convention’s debate.

In the 1852 convention, Langston argued that Black Americans needed to emigrate within North America in order to preserve the community. Local papers reported that in his convention speech, “John Mercer Langston is … in favor, we are glad to say, not of emigrating to Liberia nor to any other part of Africa, but to some part of the American Continent. One of his chief reasons in favor of this course, is, that the African race if they remain in this country must evidently be absorbed and extinguished.” [2]

Langston believed that this political move would encourage white Americans to observe and respect the political capital held by the Black community. The fight was for “our fellow-countrymen now in chains, to whom we are united in a common destiny demand it; and a wide solicitude for our own honor, and that of our children, implore us to use this common action.” [3] Inaction destined free and enslaved Black Americans to lives of political and social stagnation.

The debate around the political parties consisted of Langston, David Jenkins, Peter Clark, and William Watkins. Langston’s argument was relatively simple, as the minutes of the convention report, “His motto was, ‘The Democratic Party must be destroyed.’” Langston never argued on behalf of the Republican Party, rather arguing that the Democratic Party’s decline was a positive development. “The Democratic party had always abettors of Slavery; it was now declining, for the people were opposed to Slavery, and willing to trample the fugitive act under foot,” Langston said at the convention. [5] Jenkins and Watkins agreed, and argued for support of the Republican Party which “had done something for the colored man.” Clark was apprehensive of the Republicans, who he believed would become more conservative as a national party. 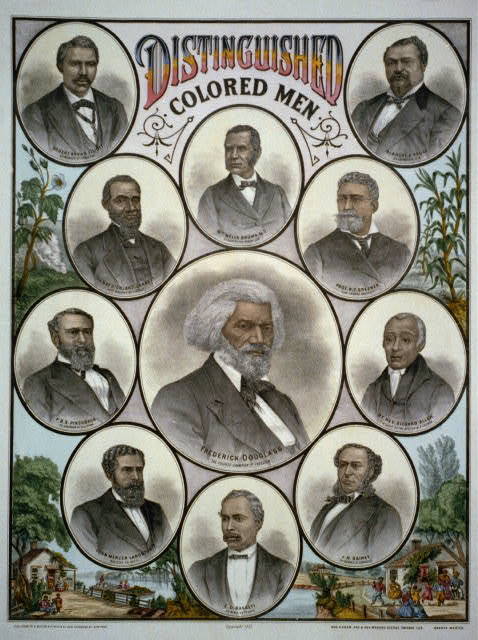 Langston (bottom-left) had a contentious professional relationship with Frederick Douglass (center). “Distinguished Colored Men.” Courtesy of the Library of Congress. 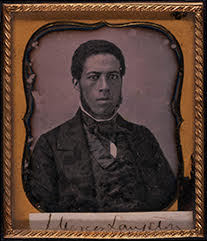 2) Douglass, Frederick. “John Mercer Langston, it is said by the papers, made an able speech before the Colored Convention in Cincinnati in favor, we are glad to say, not of emigrating to Liberia nor to any other part of Africa, but to some of the American Continent.” The North Star 5 February. 1852Web. 19th Century U.S. Newspapers. Web. 28 February. 2016