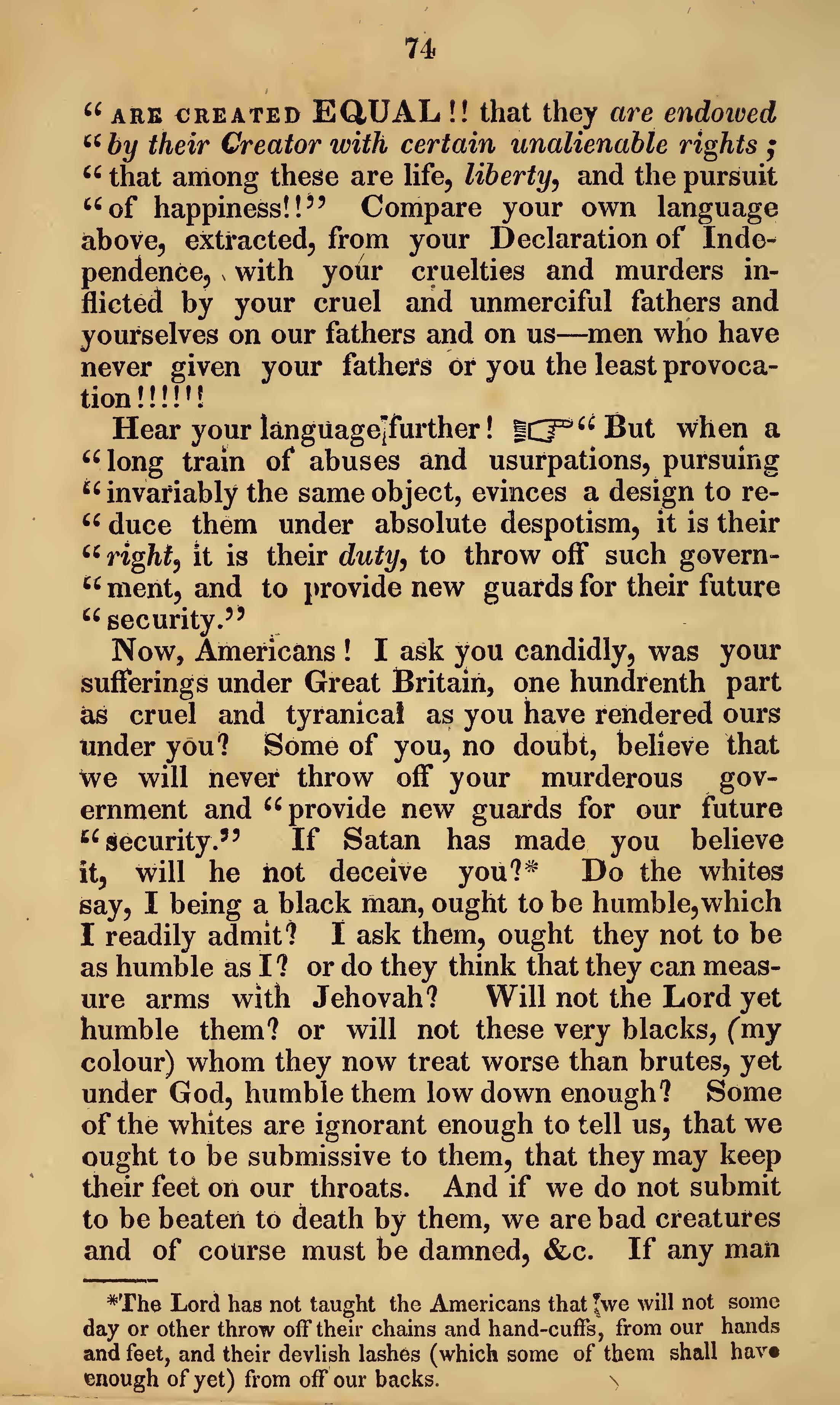 A contemporary reader of both Garnet’s “Address” and Walker’s Appeal will notice unusual typographic characteristics in both texts. Scholarship on these elements has largely been either dismissive of the role typography played in the construction of these texts’ meanings. Worse yet, some suggest that unusual typography reveals that the author is losing “control” over the text. Peter Hinks insisted that the unusual typography of the Appeal does little to change the text’s core message. However, Marcy Dinius was one such scholar who has bucked this trend and looked meaningfully at the typography of the Appeal. She posited that typographic decisions were both intentional on Walker’s part and evidence of his mastery, not his failure.

Dinius argued that small capitalization can be thought of as an increase in emphasis over italics, while large capitalization drew even more attention. For example, in the sample page to the left, Walker created a snowball effect by typing “ARE CREATED” in all caps then increasing his font size before finishing the sentence off with multiple exclamation points.

Interestingly, while Garnet was clearly indebted to Walker for much of the content of his argument, his text was comparatively restrained in its typography. The two graphs below demonstrate that while Garnet was invested in using emphatic punctuation, he did so in a much more tempered manner than Walker, who characteristically employed strings of exclamation marks to emphasize his points.

Frequency of Punctuation: Garnet vs. Douglass

Hover over each bar to find out its exact numerical value.

Garnet was similarly restrained in his employment of words and phrases in all caps. While Walker peppered capitalization throughout his Appeal (and in various sizes), Walker’s use of fully capitalized words and phrases can be quoted here in its entirety:

TO SUCH DEGREDATION IT IS SINFUL IN THE EXTREME FOR YOU TO MAKE VOLUNTARY SUBMISSION.

NEITHER GOD, NOR ANGELS, OR JUST MEN, COMMAND YOU TO SUFFER FOR A SINGLE MOMENT. THEREFORE IT IS YOUR SOLEMN AND IMPERATIVE DUTY TO USE EVERY MEANS, BOTH MORAL, INTELLECTUAL, AND PHYSICAL THAT PROMISES SUCCESS.

Thus there lies an interesting tension between Garnet’s use of what Dinius calls “radical typography,” which he almost certainly borrowed from Walker, and his measured way of doing so. Regardless, we maintain that emphatic punctuation and capitalization should not be read as inconsequential or evidence of these writers’ weakness. Rather, they should be read through a print culture lens as tied to the rhetoric of their message and important to the experience of their readers.