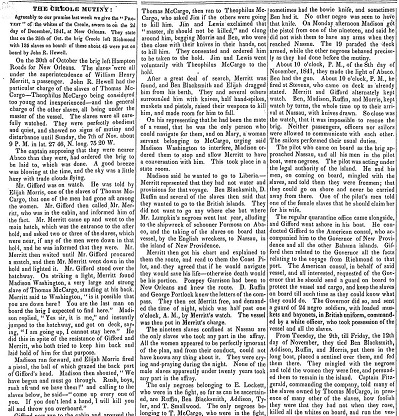 Information on Madison Washington’s origins are sparse, but historians have put together a comprehensive history from newspapers and oral accounts of the slave rebel leader and the slaves aboard the Creole.

Madison Washington’s story goes as far back to enslavement on a Virginia plantation. His desire for freedom was seen way before his rebellion on the Creole, back when he first escaped the Virginia plantation for Canada. After arriving in Canada, he decided to return to Virginia to free his wife from enslavement, but was captured and re-enslaved during the process. He was sold to the slave trader Thomas McCargo, who eventually put him aboard the Creole where he was marked as a “dangerous slave.”

The Creole was a large trading ship that left Richmond, Virginia, for New Orleans, Louisiana, on October 25, 1841. The ship carried 135 slaves, thirteen sailors and crew members, six white passengers, and tobacco. When approaching the Bahamian Islands, nineteen slaves initiated the revolt led by Madison Washington, and took control of the brig. Due to Great Britain’s 1833 Emancipation Act, slavery was abolished in all British territories, which included the Bahamas, so the mutineers ordered the crew to dock there. The ship arrived in New Providence at Nassau on November 9, 1841, which was the largest settlement in the Bahamas predominantly populated by newly freed Blacks. Upon arrival, the 116 slaves who did not participate in the revolt were immediately emancipated, but the mutineers were detained and put on trial. The United States was pressuring Great Britain to extradite the slaves, but by March 1842, the mutineers were also freed. The rebellion aboard the Creole was relatively non-violent where the total number of fatalities was three: one crewmember and two slaves. But Black solidarity and violence successfully produced an enslaved-to-free outcome. 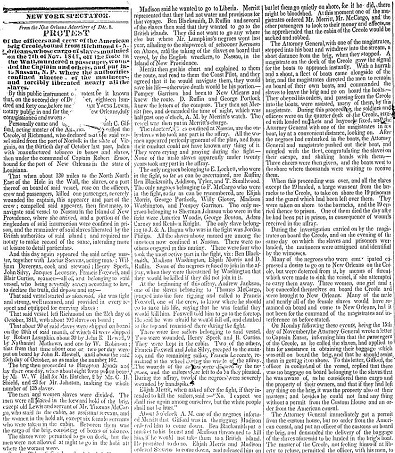 The accounts of Madison Washington were fairly fresh in the imagination and minds of Henry Highland Garnet and other delegates. The incident had happened only one to two years prior the 1843 Buffalo-based national convention. Evoking the heroism of Madison Washington and the mutineers aboard the Creole, Garnet passionately attempted to convince the delegate members to realize the power and necessity in Black national ties between the free Black communities and the enslaved Black communities.

Frederick Douglass, who was Henry Highland Garnet’s leading critic at the 1843 convention and Black proponent of Garrisonian moral suasion, later on in his life champions Madison Washington and publishes The Heroic Slave, a fictional account of Madison Washington and the mutiny aboard the Creole. Years after the convention and the rebuking of Garnet’s 1843 address, Douglass realized the deep-seeded racism that existed within white abolitionist communities, which lead to a recognition of the nominal freedoms for free Blacks. Despite his original stance, Frederick Douglass eventually shifted toward radical abolition and Black self-assertion.

Through the “Address,” Henry Highland Garnet and Julia Williams Garnet strategically situated the slave insurrections, and engendered the ideals of radical, Black self-assertion in order to inspire Black mass organizing, solidarity and nationhood.

The Duty of Free States

In his book The Duty of the Free States or Remarks Suggested by the Case of the Creole, William E. Channing described the case on the Creole rebellion and the fate of the slaves. Read below.