Because we do not have access to the original address, reading Garnet’s words is like seeing a black hole: we know it happened, but we can observe it only through the discourse that responded to its gravity. Talking about the address, then, is really talking about a constellation of at least three distinct textual events: The official minutes of the 1843 National Colored Convention, newspaper accounts describing Garnet’s performance, and the 1848 and the 1865 printed editions of his address. 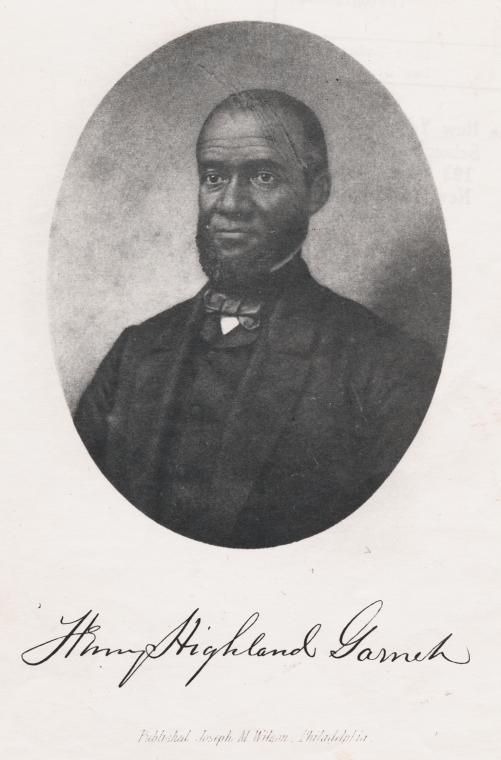 This exhibit addresses an issue with the modern-day memory of Henry Highland Garnet’s “An Address to the Slaves of the United States.” It reminds readers not only that Garnet’s original address was an oration—and originally voted down—but that there are several subsequent editions of the printed text—each of which can be examined for its individual qualities. Garnet’s “Address” appears static, but it was a living document in many ways.

By refocusing attention on the “Address” to more broadly recognize its history, we are able to show how it reflects issues connected to Black print culture in the antebellum period, as well as, tensions that exist between print and oral performance. We will trace Garnet’s “Address” through its inception at the 1843 Convention to its subsequent publication journey. In doing so, we extend our attention beyond the minutes of the forums and include information from newspapers and other textual sources to color in the gaps that surround the 1843 oration of Garnet’s “An Address to the Slaves of the United States.”

This exhibit accompanies the forthcoming article, “”Flights of Fancy”: Rereading Henry Highland Garnet’s “Address to the Slaves” through reception History and Print Culture,” by Professor Derrick R. Spires from the essay volume, Colored Conventions in the Nineteenth Century and the Digital Age.