GARNET AT THE 1843 CONVENTION

The 1843 National Colored Convention held in Buffalo, New York, saw the first delivery of the Henry Highland Garnet’s “An Address to the Slaves of the United States.” The work was greatly influenced by David Walker’s The Appeal and Garnet’s wife, Julia Williams Garnet. Although this is the first appearance of the “Address,” there is no record of the speech, nor is their extensive description of the “Address” in the convention minutes.

“The business committee reported, by their chairman, H. H. Garnit, an address to the slaves of this land, prepared for the occasion, which was read and accepted. C. B. Ray moved its reference to a select committee of five, of which he hoped Mr. Garnit, whose production the address was, would be the chairman.” Minutes of the National Convention of Colored Citizens; Held at Buffalo; on the 15th, 16th, 17th, 18th, and 19th of August, 1843.

The absence of a detailed description of Garnet’s recitation points towards the fact that the convention minutes are curated artifacts that convey the 1843 National Colored Convention’s political position at this time.

Although the convention’s minutes do not leave us with information about the actual performance of the 1843 “Address,” insight into how other delegates responded to it contextualizes the delivery at the event. Henry Highland Garnet read his address to the delegates as means of proposing that the Colored Conventions and free Blacks must unify with enslaved Blacks in order to take a radical, Black self-assertive stance on Black subjectivity, autonomy, abolition, and freedom. Reading the excerpt above, we see that there was a fundamental disagreement with approach to Garnet’s proposed methods lead by Frederick Douglass. Douglass, an ally of Garrison at the time, was a proponent of moral suasion. Douglass critiqued Garnet’s “Address,” characterizing it as too violent and too physically forceful. Douglass also critiqued the strategy behind the proposal being adopted by the Colored Conventions, asserting that the slaves in the deep South will never be able to access Garnet’s address. Due to this disagreement, Garnet’s proposal for the conventions to adopt the “Address” was put to a vote to modify the language.

This very fact calls for speculation about the prolific nature of Garnet’s address. The arousal of its passionate disagreement and conflict between these two major figures leads us to believe that Garnet’s performance was received as passionately inspiring. It also illuminates the political differences among the delegates within the Colored Conventions Movement. Ultimately, this radical disagreement led to a vote on whether Garnet’s address should be adopted by the Colored Conventions to promote. The powerful rhetoric of both Garnet and Douglass led to a stalemate where nineteen delegates voted “Nay” to eighteen “Yeas.” The next day, it can be seen that the vote took a drastic shift where seventeen delegates dropped out, and three different voters were added in. There were thirty-seven delegates in the first vote, as opposed to twenty-three in the second vote. The second vote resulted in fourteen “Nays” and nine “Yeas.” This was the final vote to dismiss Garnet’s speech as a document printed and adopted by the Colored Conventions.

The outcome of both voting rounds calls for speculation. Were voting outcomes affected by regional differences and is there a pattern that demonstrates this? Do the supporters of each stance illuminate social networking and major political alliances within the Colored Conventions movement? What happened between the first day of voting and the second day that renders such drastically different results? The diagrams below represent this voting outcome graphically to possibly illuminate some of these questions.

Garnet’s address went through two rounds of voting. The second vote took place the next day and was comprised of twenty-three delegates. Seventeen delegates in total dropped out from the first vote, and three delegates were added in. The three additions took the side of Douglass. This was the final vote that decided on whether the “Address” would be adopted by the conventions. Based on these results, the delegates did not want the rhetoric of Garnet’s “Address” associated with the Colored Conventions, hence the descriptions of the original address, as a performed text is absent from the convention minutes. 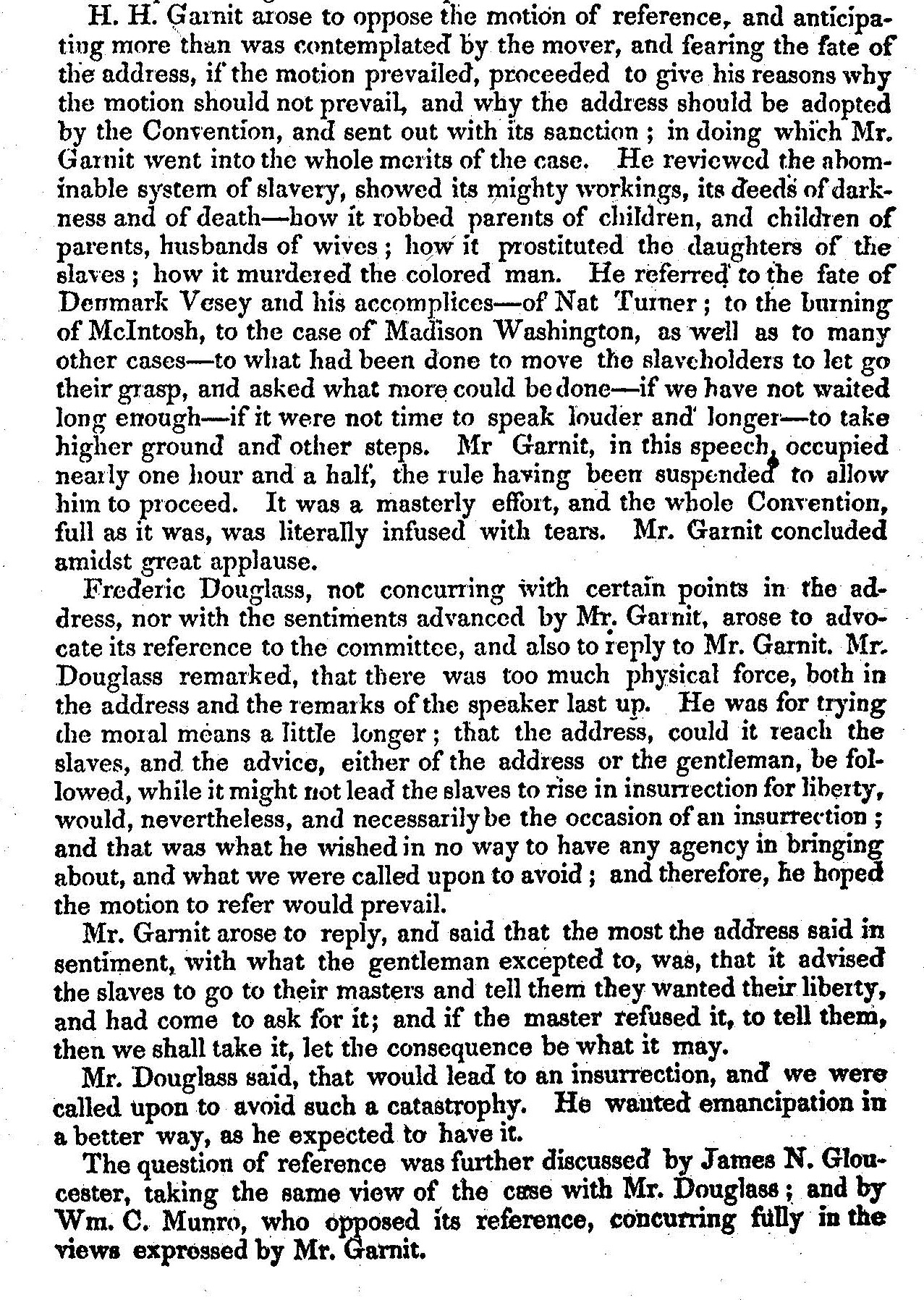 Excerpt illustrating the disagreements between Henry Highland Garnet and Frederick Douglass. Minutes of the National Convention of Colored Citizens; Held at Buffalo; on the 15th, 16th, 17th, 18th, and 19th of August, 1843.

“The address to the slaves now being the order of the day, Frederic Douglass rose and made some forcible remarks against its adoption.” Excerpt detailing discussion about voting on Garnit address. Minutes of the National Convention of Colored Citizens; Held at Buffalo; on the 15th, 16th, 17th, 18th, and 19th of August, 1843. 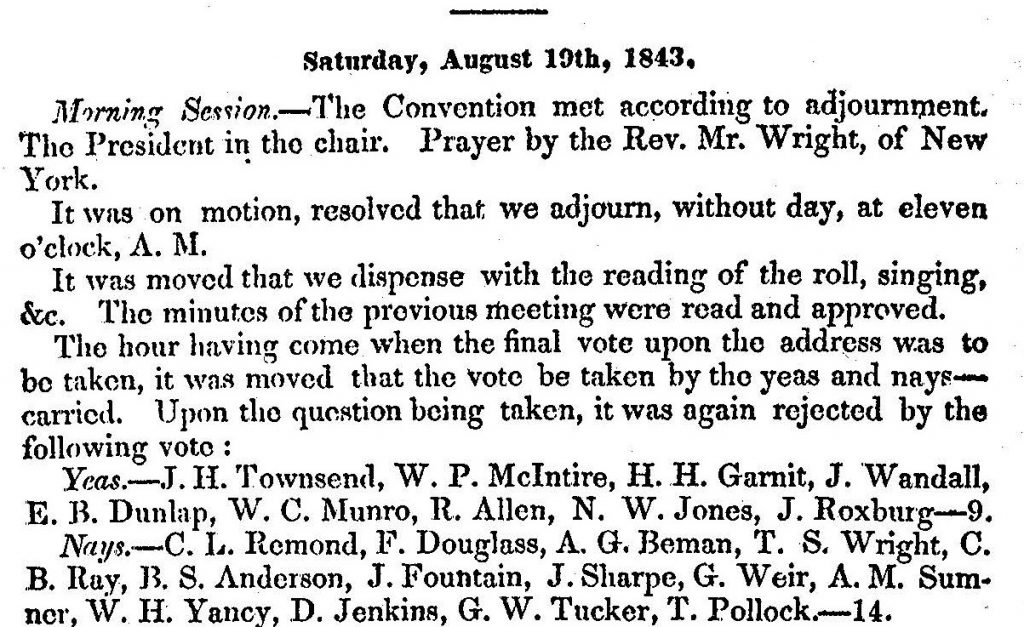 “The hour having come when the final vote upon the address was to be taken…” Excerpt detailing discussion about voting on Garnit address. Minutes of the National Convention of Colored Citizens; Held at Buffalo; on the 15th, 16th, 17th, 18th, and 19th of August, 1843.

Delegates and Their Votes

The charts below outline how each specific delegate participated in the voting process. The charts and maps delineate where each delegate member is from and how they voted. In the second round of voting it is interesting to note that Douglass garnered support from most leaders from each state [President (P) and Vice Presidents (VP)]. Click on the lines to find out more about each delegate.

The chart below further breaks down the number of voting delegates by city and state. Hover over each bar and states for more detailed information.

The interactive map below demonstrates the finalized votes in the second round. It shows which states majority voted (Nay) in support of Douglass and (Yea) in support of Garnet.

These charts offer interesting perspective on how different delegates voted. Regional demographics have shown to influence voting trends, and further contextualization can illuminate the political conditions of these regions. Also interestingly enough, the majority of delegate leadership, such as Convention President Amos Beeman and other regional Vice Presidents, supported Douglass’ proposal to reform or dismiss the “Address.” Certain states shifted from the first to the second vote. This opens up more questions about what happened from the first day to the second day.