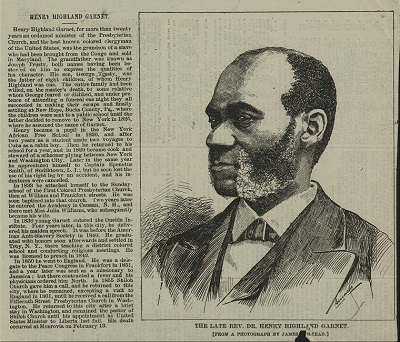 In the essay, “‘Flights of Fancy’: Rereading Henry Highland Garnet’s ‘Address to the Slaves’ through Reception History and Print Culture,” Derrick Spires deployed the reader response theory in order to unearth new methods to read Henry Highland Garnet’s original “An Address to the Slaves of the United States.” This address was recited and performed at the 1843 Buffalo National Colored Convention. Using reader response theory, this page is designed to construct a narrative from various points of view, which influence the way we read the archival absence surrounding Garnet’s oral recitation. The exhibit utilizes the 1843 convention minutes to read Garnet’s original oration, while simultaneously elaborating voting trends at the conventions and newspaper responses that also give us insight into Garnet’s original address. 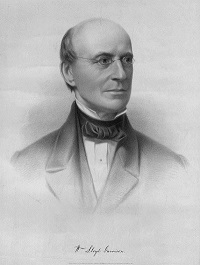 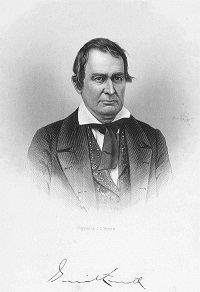 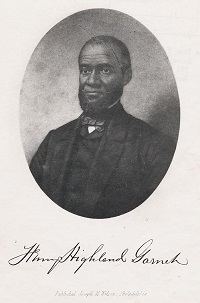 During the 1840s, there were growing debates due to the different points of view regarding abolitionist strategies. William Lloyd Garrison, a proponent for moral suasion (Garrisonian abolition), encouraged white Northerners to live up to their moral Christian duty to abolish slavery. He denounced any form of violence as a means of accomplishing abolition. This method centered white actors, or white subjectivity, while Blacks were objectified and rendered passive.

In contrast, Gerritt Smith, a radical abolitionist, did not view violence as immoral, but as inexpedient for the abolition of slavery. He advocated for slaves to runaway from the plantation, along with white abolitionists actively facilitating these escapes. Although radically different from Garrison, Smith’s strategy of abolition still conceptualizes Blacks as objects. When a slave escapes, he or she is still considered property and the white enslavers are not held accountable for the physical, social, and spiritual cost of enslavement. Due to the climate of the 1840s, Garrison was losing traction within abolitionist communities where Smith’s methods were becoming more popularly accepted.