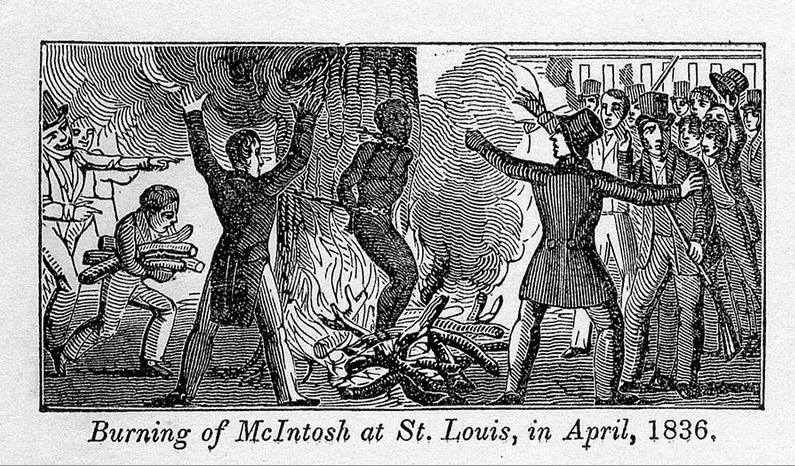 Image Courtesy of the Library of Congress.

Francis McIntosh was a boat worker on the steamboat Flora and was described as a freeman and mulatto from Pittsburgh, Pennsylvania. Shortly after arrival in St. Louis, Missouri, McIntosh was arrested and charged for obstruction of justice because he did not aid two officers when summoned. The police officers were attempting to arrest McIntosh’s fellow shipmates and wanted McIntosh to assist them in the arrest. When McIntosh refused, he was arrested on the spot and was told he would be imprisoned for five years. In retaliation, McIntosh stabbed both officers and fled the jailhouse.

One of the officers, who practiced excessive, immoral, corrupt racial policing attempting to imprison McIntosh for five years, died. His death ignited blood lust in St. Louis among many white residents. McIntosh was pursued, caught, and imprisoned. Before he could be sentenced, an angry white mob broke into the jailhouse and overpowered the jailer to extract him. After McIntosh was paraded through the streets of St. Louis, the white mob chained him to a tree with firewood underneath his feet waiting to be lit. Thousands of residents came to witness the state-sanctioned murder. An alderman waved a pistol at the crowd and threatened to shoot any one who attempted to stop the murder. The white mob proceeded to slowly burn Francis McIntosh to death. Some newspaper accounts describe him to be alive, yelling for twenty minutes in the pit of fire before he eventually died.