THE MURDER OF ELIJAH P. LOVEJOY 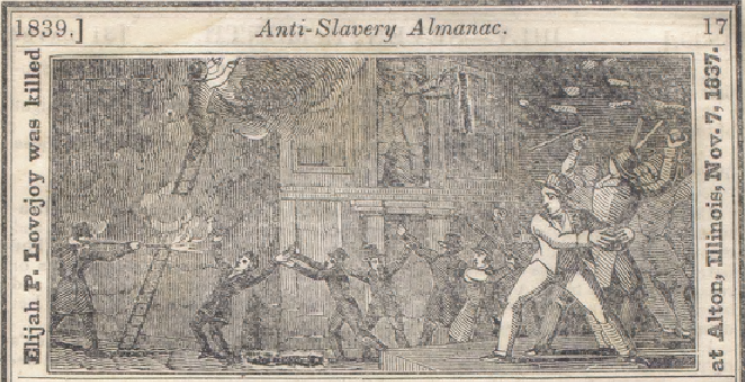 The rampant violence that exploded in St. Louis was not just reserved for Francis McIntosh and other African Americans.

Elijah P. Lovejoy was a white Presbyterian minister, abolitionist, and the owner and editor of the newspaper St. Louis Observer. He was targeted by white terrorism after he wrote about the horrific lynching of McIntosh in his paper. Lovejoy asserted that the lynching threatened the integrity and purity of the constitution, laws, and ideals that the country is built on. He argued that the patriot and the Christian could only rally behind justice as opposed to wild mob vengeance. Lovejoy described the “spirit of mobism” and lawlessness as “men and communities…breaking over all restraints of law and shame…which show that man is yet a fiend at heart.”[1]
After he published the article, Elijah P. Lovejoy was threatened and exiled from St. Louis, Missouri. He relocated his printing press across the river in Alton, Illinois, the same location where he was murdered a year later by a pro-slavery mob while trying to protect his printing press. White terrorism, which justifies racial policing, is inextricably linked to the racist politico-socio hierarchical structure in the United States. White violence was deployed to silence through murder and terror. As it turned out, even a white man, who exposed the state of the structure, was not safe from white violence.

Narrative of the Riots at Alton