The North Star’s Report on the Convention

On the front page of the first issue of the North Star is a lengthy article entitled “The Colored Convention” detailing the events of the 1847 National Convention of Colored People. Though the first issue of the paper is unfortunately absent from the archives, the length of the article indicates that it would have consumed a significant portion of the front page. Its prominence in the inaugural issue is a clear statement of the importance of Colored Conventions in Douglass’ eyes.

Though Douglass was himself a delegate to the 1847 Convention, he chose to print a report written by W.C. Nell, a prominent delegate from Massachusetts. The North Star article calls Nell’s report “the best we have seen.”[1] Not coincidentally, the paper also contains a notice that Nell would be resigning his position at the abolitionist paper, The Liberator, to begin writing for the North Star. 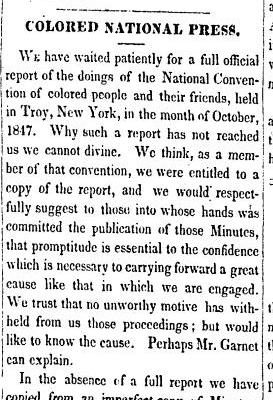 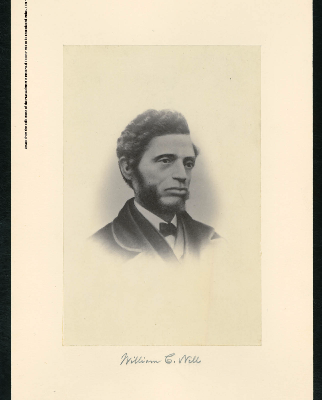 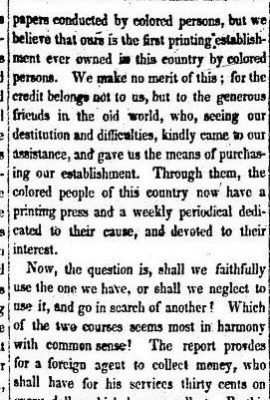 Though Douglass was not an author of the report on the convention, the report aligns closely with the positions he took at the convention. For example, Nell writes three lengthy paragraphs to describe the debate over founding a colored college, detailing the “talent, skill, and earnestness of argument” with which Douglass and others opposed the plan.[2] By contrast, the debate over the establishment of a Black national press – a debate that consumed many hours of the convention – was summed up in two sentences. That Douglass was strongly opposed to the proposition comes through clearly by the lack of attention the debate receives.

A look through the pages of the North Star reveals that the paper was in tune with a number of other issues raised at the convention, even if the connection was not specifically stated. For example, Nell’s article describes the anger delegates expressed over the decision in Connecticut to refuse Black men the vote. The same issue of the North Star contains a reprint of a scathing article from The Liberator criticizing the citizens of Connecticut for their “pro-slavery” vote.[3]

We have waited patiently for a full official record of the doings of the National Convention….We think, as a member of that convention, we were entitled to a copy of the report, and we would respectfully suggest to those into whose hands was committed the publication of those Minutes, that promptitude is essential to the confidence which is necessary to carry forward a great cause like that in which we are the engaged.[4]

Douglass certainly made his dissatisfaction clear.

Why cover the convention months after it had already ended? Despite the convention’s conclusion, conversations continued. By including the coverage of the 1847 convention in the inaugural issues of the North Star, Douglass, Nell, and other writers made a statement that the Convention was valuable—even for those who could not physically attend. By dedicating space for the Convention in newspapers, the meetings became news. Those news were then linked to other important national and international events because it was printed alongside them.