The Continuing Conversation on Education in The North Star

The Convention of 1847 and the North Star held a common interest: both the convention and the newspaper were invested in larger issues and how they would affect the situation of Black communities. The convention ended, but the conversations continued through another medium—Black print. The North Star continued the thread of conversation about education, engaging readers from different places and stations in life.

From its beginning, North Star was invested in education. It announced in its first issue that one of its goals was “to promote the moral and intellectual improvement of the colored people,” thus sharing one of the 1847 Colored Convention’s aims. Education was a two-fold issue in the newspaper: it discussed education of Black youth within school systems, but also “educated” or informed the newspaper’s readers of the arguments, debates, and conversations within the Black community. The paper did this by including a multiplicity of voices. The paper re-printed important articles from previously published writers, and it included letters from the readership, creating a space for debates and discussions. 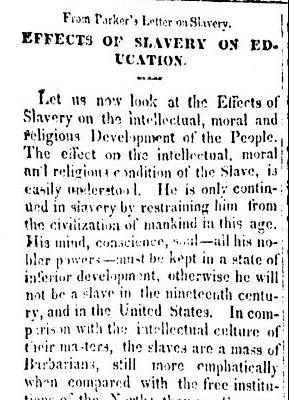 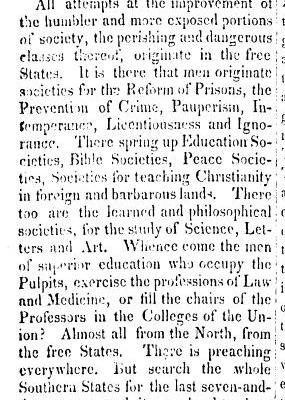 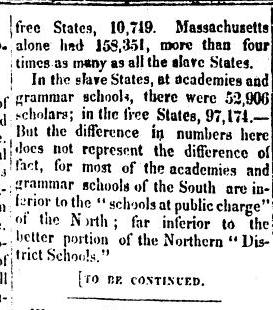 Theodore Parker was a white minister in the Unitarian church, a transcendentalist, and an active abolitionist. Selections of his “Letter on Slavery” were re-printed across two March 1848 issues of North Star. In the four-page issue of the North Star, Parker’s letter began on the second page, in the top left-hand corner, taking up a full column and a half of the interior page. It could be found under “Selections,” which also contained original pieces for North Star, as well as articles re-printed from other sources. Because Parker’s letter is placed on the upper left side of the paper, it is one of the first pieces that a reader would see. Printing Parker’s letter and a list of colleges and educational opportunities subtly pushed for Douglass’ side of the argument from the 1847 Convention: schools, especially in the North, already existed, and white abolitionists supported Black education. Without directly publishing a piece arguing such a position, North Star continued to address convention topics while maintaining Douglass’ stance.

By including reader responses, North Star offered a dynamic space for debate. One reader, Amos Gilbert wrote a letter from Salem to Douglass. Gilbert expresses his satisfaction in receiving his copy of North Star—not hot off the press but fresh from the post office. He writes that he paid particular attention to “An article under the caption, ‘Education.’” He was “pleased” with the numbers given in Parker’s letter, and says that he hopes that the subject of education will “continue to… claim attention” in the newspaper, for “on education everything future depends.” Amos Gilbert also includes a brief report on a school situation in a town called Marlboro, officials admitted Black children in their schools and had Charles Lancaster as director – a man who “is not chargeable with a drop of Anglo-Saxon blood coursing in his veins.” 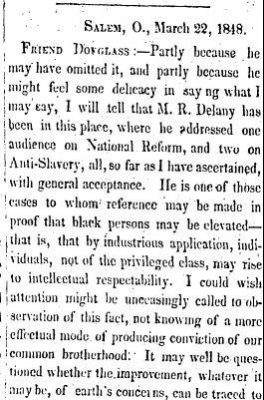 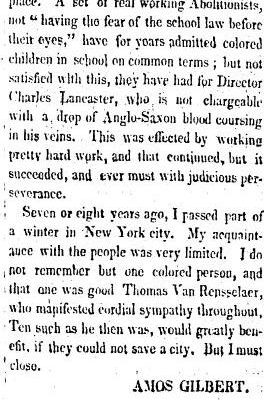 “There is work to be done,” wrote Gilbert, and “it would delight me to see the North Star in the lead.” This brief letter accomplished several important points. Gilbert’s report on the situation informed other readers of the educational situation in Salem, Massachusetts. The fact that Gilbert mentioned his copy came from the post office informs other readers where it could be found or that others should consider requesting a paper be sent through subscription or donation. Gilbert also supports Douglass’ side of the education debate by proving that opportunity for leadership positions and learning existed for willing Black students. However, most importantly, Amos Gilbert’s letter to “Friend Douglass” created a sense of community by showing that the newspaper listened to an active and engaged readership.