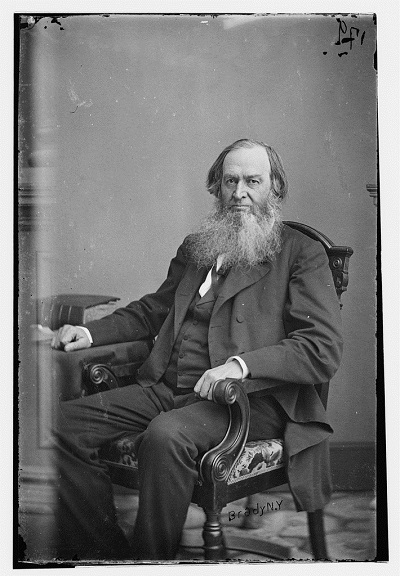 A portrait of Gerrit Smith. Image courtesy of the Library of Congress.

“Gerrit Smith has come down to us through history as the hypochondriacal abolitionist sugar daddy who bought John Brown his guns in 1859 and then avoided prosecution for treason with a well-timed stint in the nuthouse.” [1]

So begins Bill Kauffman’s pithy summation of Gerrit Smith’s career and public reputation, both past and present. In fact, Smith was a man of many passions and pet causes. He preached loudly and backed up his words with money—lots of it.

Smith was born in Utica, New York, in 1797, the son of a wealthy landowner. He became involved in politics in the 1820s, eventually developing an interest in the antislavery movement. After witnessing a mob attack the attendees of the 1835 New York Anti-Slavery Convention, he invited the attendees to meet in his hometown of Peterboro, New York. By 1836, he was president of the New York Anti-Slavery Society. In 1840, he helped to found the Liberty Party, whose primary platform was the abolition of slavery, and he ran unsuccessfully for governor of New York that year. He also ran for president as the Liberty Party candidate in 1848 and was elected to Congress in 1853 as the Free-Soil candidate.

In addition to his political activity, Smith also believed in being hands-on when it came to liberating slaves. His estate in Peterboro was a station on the Underground Railroad in the 1840s and 1850s. He also defied fugitive slave laws by helping to forcibly free runaway slaves from jail and then send them to Canada. In 1846 and 1847, he deeded 120,000 acres of land to 3,000 Black families to help them become farmers and eventually become eligible to vote.

In the 1840s, Frederick Douglass and Gerrit Smith met, and the two men developed deep admiration for each other. Smith provided capital to help Douglass found his first newspaper, the North Star, and Douglass regularly sang Smith’s praises in its pages. When Douglass published his second autobiography, My Bondage and My Freedom, he included an effusive dedication to Smith.

Over time, Smith grew increasingly convinced that “moral suasion” alone would not lead to the abolition of slavery. In 1848, he established a connection with John Brown and began to support Brown’s antislavery activities. In 1859, Brown led the raid on Harper’s Ferry, and Smith was accused of having supplied him with the guns. As Smith was conveniently convalescing from a mental breakdown when the charges were levied against him, nothing ever came of the accusations.

Smith was an idealist and a life-long activist, not only for the cause of antislavery but also temperance and a number of other causes. He advocated hard work, clean living, and generosity.