Gerrit Smith was an activist and philanthropist well known in the nineteenth century for his generous donations to abolitionist projects. One project he supported was Douglass’ decision to start the North Star. Not surprisingly, when Smith donated 120,000 acres of land to 3,000 Black residents of New York, the North Star gave the grant plenty of positive attention. The paper printed numerous articles praising Smith and encouraging Black city-dwellers to emigrate to upstate New York to become farmers and in doing so to claim rights as New York voters.

The relocation project dovetailed with Douglass’ belief in self-help as a key to social change and full Black citizenship rights. An early article in the North Star promoted the project as a way to refute white claims of Black helplessness. By becoming successful farmers, the settlers would “make those who declare us incapable of taking care of ourselves, slanderers before all people.”[1] The same article also echoed the concern Douglass expressed at the 1847 Colored Convention: failure to take advantage of the opportunity would have the opposite effect.

A week later, North Star printed the names of people “intending to quit the city of New York for their farms in Franklin and Essex Counties.”[2] The article contends that “[t]he occupation of those lands will form an era in the history of the free colored men in this state.”[3] A mere month later, however, the paper printed a letter warning incoming settlers to beware of local inhabitants who would attempt to discourage or deceive them.[4] Despite this news, the North Star continued to express undiminished enthusiasm for the project, proclaiming, “Who among the settlers of Essex and Franklin Counties will fell the first tree? The North Star will hail the name and hand it down to posterity.”[5] 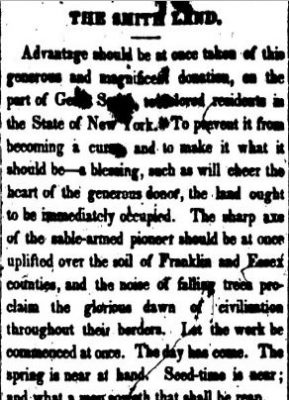 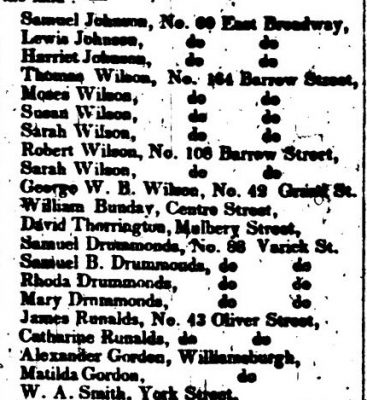 In May of 1848, the paper printed excerpts from a sermon by Henry H. Garnet to celebrate the departure of a group of settlers. Garnet had been vocal in his support of the project at the 1847 Colored Convention. His sermon echoed the sentiment repeatedly expressed by the North Star, that the settlers would prove a positive example of what Black people could achieve: “Would you remove the stumbling block from the paths of your injured brethren?…Set them an example of independence. Show the world the falsity of the old doctrine, that we are doomed to be hewers of wood, and drawers of water.”[6]

As settlers began to inhabit the Smith lands and develop a small community nicknamed Timbuctoo, Douglass became even more directly involved in the project. He added the weight of his reputation to the venture by indicating that he had himself interviewed Mr. John Brown, “who had but returned from the lands and pronounced them good.”[7] In addition, Douglass set himself up as an intermediary for a local surveyor, Wait Lewis (who, not coincidentally, advertised in North Star). The connection to Lewis would eventually backfire, however, as news began to trickle in that Lewis, like many other whites in the area, was cheating the settlers. Douglass duly reported all sides of the story, but the scandal would signal a downturn in the frequency with which the Smith land grant would appear in the North Star.

[7] “Gerrit Smith’s Lands.” North Star 8 Dec. 1848. The John Brown mentioned in this article is the same man who would eventually lead the raid on Harper’s Ferry. To read about his connection to the Gerrit Smith lands, see What Happened to Timbuctoo?