Report on the Committee on Agriculture 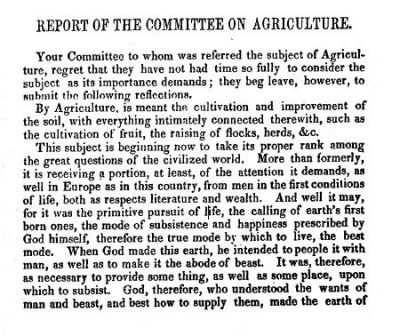 One of the more unusual reports appended to the minutes is the report of the committee on agriculture. In the report, the committee offered a series of “reflections” on the spiritual virtues and material benefits of an agrarian lifestyle. God, they contended, meant for men to be farmers. When men obeyed this call, they became better people – morally, intellectually, and physically. In addition, farmers were by nature prosperous, independent businessmen. Perhaps most importantly, agriculture was a pursuit particularly suitable for Black citizens: it was open to everyone, its start-up costs were low, and it led to social equality. The committee concluded, “An Agricultural life then is the life for a proscribed class to pursue, because it tends to break down all proscriptions.”[1]

Why create such a report that is arguably more of a manifesto? This question may be addressed in the report’s last few paragraphs. Shortly before the convention convened, a New York politician and white social activist named Gerrit Smith donated 120,000 acres of land to be parceled out to 3,000 Black families, provided they were willing to move to upstate New York and become farmers. Smith was an abolitionist who believed in political participation and opposed Garrison’s arguments about the constitution vis-à-vis slavery. He gave away parcels of land so that Black farmers would meet the recent land qualifications the New York legislature set forth, new requirements that disqualified many Black New Yorkers from voting. The report was thus designed both to acknowledge Smith’s generosity and to encourage people to take advantage of the opportunity.

Of all the reports presented at the convention, this one was the subject of the least debate, and the resolutions to officially thank Smith and to promote occupation of the land passed virtually without comment. Frederick Douglass, however, did make one pointed remark. The minutes report that “F. Douglass was fearful that the munificence of Mr. Smith would operate as an injury unless the lands bestowed by him be occupied.” He was “in favor of immigration, and thought the best eulogium bestowed on Mr. Smith for his liberal donation would be by the owner of a lot going upon it and occupying it.”[2]

Douglass’ remark points to his concern with the success of the enterprise, a concern that is reflected in the sheer number of articles published in the North Star about the progress of the project and other closely related topics. More than twenty articles appeared in the paper between December 1847 and February 1849. The first was the report on the Colored Convention, written by W. C. Nell, who states, “At the suggestion of the Committee on Agriculture, a resolution of thanks to Gerrit Smith was voted, for his munificent donation of lands to the colored men of New York, in concurrence with which several speeches were made in favor of colored people emigrating from cities and locating on good farming spots, where they could build for themselves a home, identifying themselves and children with the population there settled – grow up with them, and thus exert a direct influence on the great question of human freedom.”[3]