If the link between Black newspapers and the Colored Conventions was so important, why has this not been studied before? This question raises several challenging problems. The complex answer involves historical canon, priorities of conservationists, and research realities that are sometimes very different than desired results. Challenging problems exist in the study of Black newspapers, but these problems are being addressed—in part—by projects like this one. 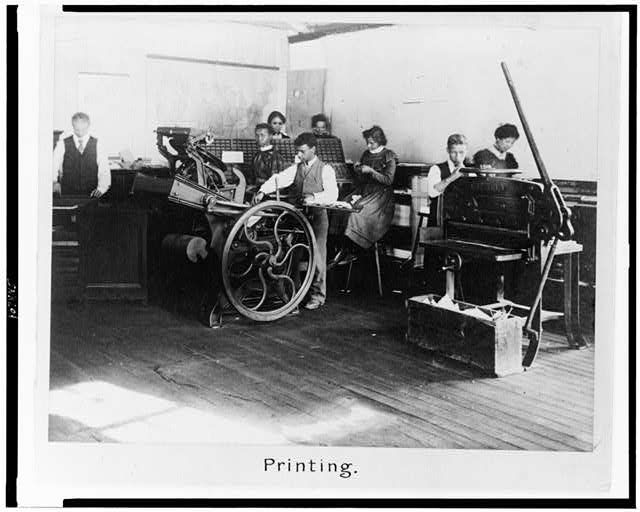 Printing with printing presses at Claflin University, Orangeburg, S.C. Image courtesy of the Library of Congress.

Some Black newspapers had very short publications. Keeping a newspaper afloat was difficult. It involved a lot of time, effort, and money; usually the individual editors and contributors were also very busy with other projects. New publications would sometimes come out, only to fold after a year or two, due to financial problems. Other newspapers changed names, or editors and founders died without someone to take over the project.

Bias exists in academic archives and conservation efforts. Black newspapers like the North Star—which contained information like convention minutes, reports of debates, and public thought—were not usually saved by historians and conservationists. For the 1847 convention, the North Star is the only paper with copies still in existence for researchers to look at. Before the 1960s Civil Rights Movement saw an effort to re-claim, re-discover, re-conserve and reprint Black print, much was ignored or lost. Just as a print culture approach looks at all the individuals involved in the creation of print, all the individuals who were responsible for archiving and preserving newspapers have to be examined as well when accounting for this gap. It is absolutely necessary to acknowledge that prejudice can be cultural, and it has an impact on what documents are to be digitized and studied by future scholars and which ones are not.

Just like convention committees who proposed resolutions to troubling issues, modern scholars also offer and suggest necessary changes. Like the committee’s proposals, these are also optimistic and sometimes daunting. Much more archival research needs to be done. The issue is not necessarily that Black newspapers, convention minutes, and print material have been totally destroyed. Instead, they may be constrained to boxes in archival backrooms, not transcribed, or not uploaded to accessible databases; making them challenging to access—challenging but not impossible. Projects like this exhibit are also in the works to make this material available for a larger readership seeking to reclaim history.