From the beginning, the Colored Conventions viewed the education of black youths in America as intimately linked to the quest for equality. In 1831, the First Annual Convention of the People of Colour began with a report by the Committee of Inquiry, declaring, “their chief business…was to submit to their body a plan for establishing a College, for the education of Young Men of Colour.” Discussions regarding the establishment of such an institution extended throughout several conventions—ranging from calls for a distinct African American college to suggestions of integration into existing white establishments. As Russell W. Irvine and Donna Zani Dunkerton suggested, “the idea gradually evolved that, in the short-run, what was needed was an integrated preparatory school.” In 1835, Noyes Academy offered such an opportunity. 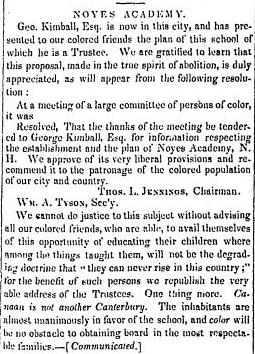 In September of 1834, the trustees of Noyes Academy in Canaan, New Hampshire, voted to allow students of all races to attend the school. Founded with the hope of offering students a classical and professional education regardless of race or gender, the Noyes Academy became the second school in the country to admit African American students in March of 1835. (In 1832, Prudence Crandall admitted Sarah Harris, an African American woman, to her Female Academy in Canterbury, Connecticut, making Crandall’s institution what is believed to be the first integrated school in the country).

A circular originally published in the New Hampshire Patriot revealed the reasoning behind the trustee’s decision to open the school to students of all races. Coded as emphasizing the constitutional rights of all Americans, the announcement demonstrates the formation of a paternal relationship as the white trustees of Noyes Academy attempted to foster the growth and development of Black children:

In adopting this principle the Trustees deem that they are reducing to practice the spirit and letter of the Declaration of our National Independence, of the Constitution and laws of New Hampshire, and the Bills of Rights of all States of this United Republic…We propose to afford colored youth a fair opportunity to show that they are capable, equally with the whites, of improving themselves in every scientific attainment, every social virtue, and every Christian ornament (qtd. in Wallace).

Upon its opening, Noyes Academy admitted twenty-eight white students and fourteen Black students including several prominent members of the abolitionist movement, such as, Henry Highland Garnet, Alexander Crummell, Thomas S. Sidney, and Julia Williams. However, the town’s reception of these students was far from welcoming. As Alexander Crummell noted in The Liberator, “Fourteen black boys with books in their hands set the entire Granite State crazy!” (qtd. in Litwack). Shortly after its fruition, several members of Canaan vocally objected to the Academy’s “mixed race.” Fearing the possibility of “living evidence of the amalgamation of blood,” at a town meeting held in July 1835, Canaan members resolved that “we consider the Colored School in this town a Public Nuisance and that it is the duty of the town to take immediate measures to remove said nuisance” (qtd. in Williams).

In an effort to “remove said nuisance,” on August 10, 1835 approximately seventy-five members of Canaan and neighboring towns gathered before Noyes Academy. With nearly a hundred yoked oxen, they pulled the school off of its foundation and eventually relocated the building to a swamp nearly half a mile away. Town members then attacked the home of George Kimball, where several of the students were at the time boarding. Despite being confined to his room with “lameness” and a fever—as James McCune Smith recounted in his introduction to Garnett’s A Memorial Discourse—“neither sickness, nor infirmary, nor the howling of the mob could subdue [Garnet’s] fiery spirit.” As records indicated, responding to attacks upon the boarding house Garnet fought back, firing “a double-barrelled shot-gun, blazing from his window and soon drove the crowd away.” Despite such moments of victory, the town members ultimately succeeded in closing Noyes Academy to all Black students, as Black students and teachers alike were eventually driven out of Canaan.

The events of Noyes Academy greatly impacted the education of the students in attendance, as well as, that of Black Americans at large. As Irvine and Dunkerton suggested, “Canaan was the site where Black and white abolitionists tried to construct the first rung of a higher education ladder, leading to Blacks’ collegiate and professional school study in America. The Noyes Academy was conceived as the foundation on which the ladder rested.” For many delegates of the Colored Conventions, the tragedy of Noyes Academy solidified the necessity of taking the education of Black youths into their own hands initiating one of many divides between Black and white abolitionists. For more information see the Education at the Conventions timeline.

Researched and written by Mariel Smith.

Irvine, Russell W., and Donna Zani Dunkerton. “The Noyes Academy, 1834-35: The Road to the Oberlin Collegiate Institute and the Higher Education of African- Americans in the Nineteenth Century.” The Western Journal of Black Studies, vol. 22, no. 4, 1998.